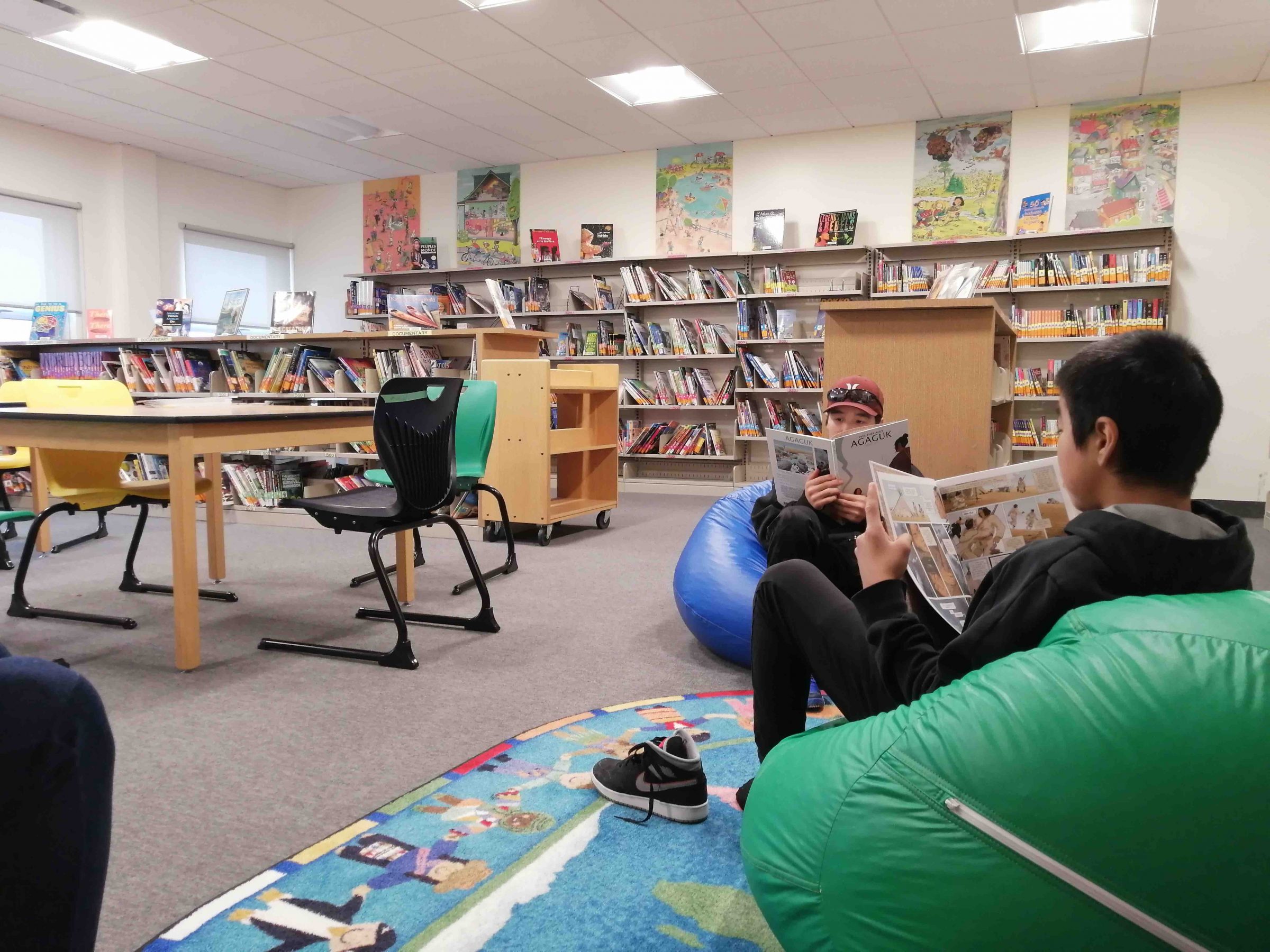 The Iguarsivik School library in Puvirnituq officially opened to the public on Feb. 26. (Photo courtesy of Kativik Ilisarniliriniq)

The library at Iguarsivik School in Puvirnituq has been open to staff and students since 2018, but as of today it’s also welcoming members of the broader community.

The transformation into a public library has been in the works for a few years, says Hugo Couillard, assistant school principal.

The catalogue of books had to be increased and digitized, and some decorative touches like a mural were painted in the two-storey space.

And that setting will be just right for both children’s story time, to be held regularly, and for a quiet place to go for community members.

Until now, the library has seen its ups and downs. About four years ago, due to lack of space in the school, it was used as a classroom rather than a library.

Since then, it has opened again to serve students, though only for book loans within the classroom. Students couldn’t sign books out to take home.

Following the library’s inaugural opening, on Wednesday, Feb. 26, at 4 p.m., students will be able to sign out books to take home.

The library will also be open to community members on Wednesday nights, from 5 p.m. to 7 p.m., and Saturdays, from 1 p.m. to 3 p.m. If the library sees a lot of traffic, those hours could increase, Couillard said.

The library is now a part of the provincial library network, Réseau Biblio du Québec. Being a part of the network has brought more books into the library and means anything they don’t have in stock can be transferred up.

“We have a lot more books,” Couillard said.

Some books have also been donated by organizations, such as the Co-op, and by individuals.

The library now carries titles in English, French and Inuktitut, which Couillard said there used to be a lack of.

There are Inuktitut books both for youth and adults, he said, some translations and others written by Inuit.

“We really want to try to promote Inuktitut as much as we can,” Couillard said. “Students are reading less and less Inuktitut, so we’re hoping with literature that interests them, they’ll get back to that.”

The project has been strongly supported by the community, with the Northern Village pitching in to see every person in the community receive a membership.

The library currently has two full-time staff, including one former student of the school who is in training. Couillard said the staff would work with students on library etiquette, like how to take out a book, take care of it and return it.

“I’m really hoping it’s going to give birth to other projects in other communities,” said Couillard. He said both Aupaluk and Kuujjuaq have libraries in the works.

“I’m really hoping every village can have one and I hope the community of Puvirnituq will come and borrow books. That’s the big thing.”