IIBA on Tallurutiup Imanga, or Lancaster Sound, could be done next April 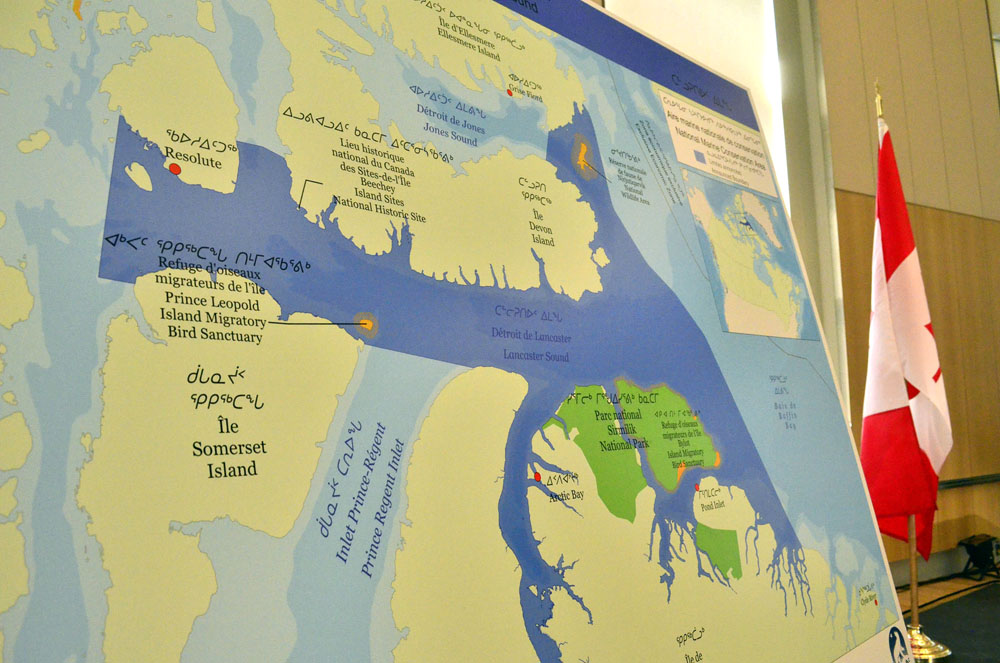 Tallurutiup Imanga, also known as Lancaster Sound, is described as twice the size of Nova Scotia and touted as the largest protected area of its kind in Canada. (FILE PHOTO)

The federal government and the Inuit of Nunavut’s Qikiqtani region are moving closer to settling the details of how Inuit will benefit from Nunavut’s new national marine conservation area.

Qikiqtani Inuit Association announced on Tuesday, Dec. 4 that it had signed an agreement-in-principle for the Tallurutiup Imanga Inuit Impact and Benefit Agreement on Oct. 30.

The QIA expects to sign a completed IIBA with the federal government by April 2019.

“It’s quite a moment to be home,” said QIA President P.J. Akeeagok, who was leading a community consultation in his hometown of Grise Fiord when he spoke to Nunatsiaq News.

“I’m proud to be here to make the announcement.”

Negotiators announced boundaries for the 109,000-square-kilometre coastal and marine area in August 2017.

Tallurutiup Imanga, also known as Lancaster Sound, is described as twice the size of Nova Scotia and the largest protected site of its kind in Canada.

The QIA and Parks Canada are negotiating the IIBA, which is required under the Nunavut Agreement.

According to this agreement in principle, the IIBA would see an Inuit advisory board created for Tallurutiup Imanga, along with an Inuit-government co-management plan.

An Inuit stewardship program started in Arctic Bay this summer could also be expanded to all five communities surrounding Tallurutiup Imanga.

And the IIBA could see country food processing equipment made available to harvesters.

“You’re looking at solid jobs that allow Inuit a sense of pride in and a sense of purpose for that particular body of water,” Akeeagok said.

“You’re looking at infrastructure opportunities that enable Inuit to go and use the resources of Tallurutiup Imanga.”

“We all knew this was going to be a robust negotiation process,” Akeeagok said, adding that often negotiations for IIBA’s usually take much longer.

The QIA and the GN are also working with the federal government on a second conservation area in the High Arctic Basin, in a body of water north of Grise Fiord known as Tuvaijuittuq, or, the ice never melts.

“The size, geographic boundaries, and designation of this marine protected area will be informed through community consultations, science and a feasibility study,” the QIA said in a news release.

In a statement, Nunavut Premier Joe Savikataaq, who is also environment minister, said, “We look forward to advancing the memorandum of understanding and participating in the work related to the Tuvaijuittuq feasibility study.”

This comes as good news for conservation groups who have long been promoting this site as “the last ice area.”

To offer more protection for the marine wildlife that Inuit use for food, one next step could be to expand conservation efforts to the North Water Polynya, said Chris Debicki, vice president of policy development for the marine advocacy group, Oceans North.

That’s a biologically rich area between Canada and Greenland known as Pikialasorsuaq.

“Many of the marine mammals that spend the spring and summer and early fall in Nunavut waters overwinter in the North Water Polynya,” he said.