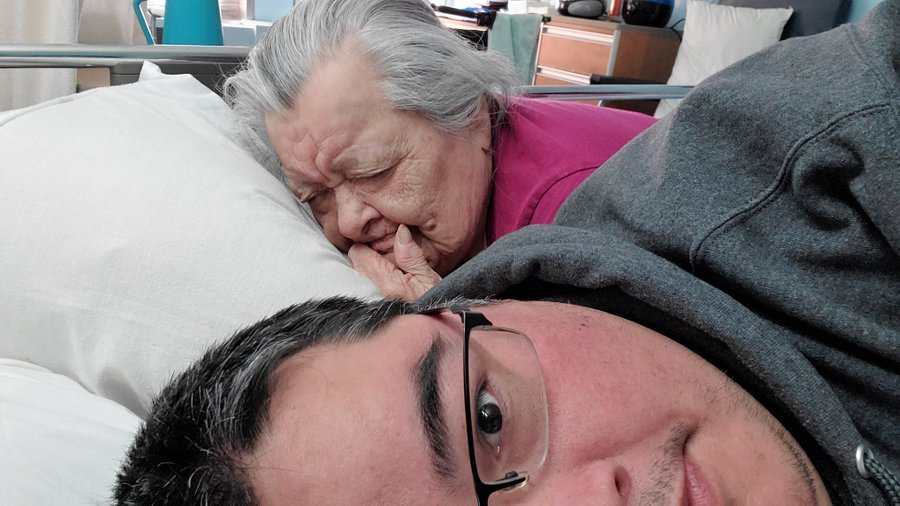 Johnny Kasudluk of Inukjuak can no longer visit his mother, Martha, seen here with him at the Inuulitsivik hospital in Puvnirnituq. On Monday there were 50 confirmed cases of COVID-19 in Quebec. To curb the spread of the virus, Quebec has stopped visits to hospitals and to seniors in long-term care facilities. (Photo courtesy of Johnny Kasudluak)

An Inukjuak man learned Monday morning that he will no longer be able to visit his mother, an elderly resident of Puvirnituq’s 25-bed Inuulitsivik hospital.

That’s after Nunavik’s health board announced on Sunday, March 15, “the immediate suspension of all visits to patients” at Inuulitsivik and at the Tulattavik hospital in Kuujjuaq, the Ullivik patient residence in Montreal and in elders homes.

Johnny Kasudluak had travelled to the Hudson Bay community of Puvirnituq from Inukjuak last Friday to spend time with his mother, Martha, who is 91 and suffers from dementia.

“She’s losing a lot of her memory, but some key memories are still intact, so she recognizes me,” Kasudluak said by telephone from the transit unit near the hospital.

His mother has been a long-care resident of Inuulitsivik since last summer, because his family could no longer provide the necessary care for her.

“It becomes overwhelming,” he said.

At the hospital, Kasudluak said he would go to visit his mother most of the day: “I leave her when she takes a nap or when she’s eating.”

But this morning, staff there enforced the ban on visits, “and they told me I could not go.”

“I tried to get an exemption, but they just pointed to the notification,” he said.

Quebec Premier François Legault said at a news conference on the COVID-19 restrictions on Monday, March 16, that visits for “exceptional reasons” would be allowed on a case-by-case basis. 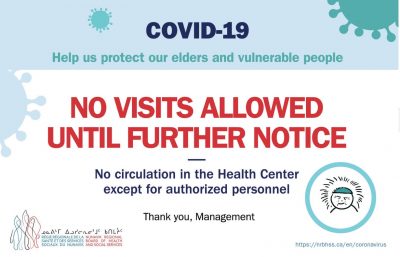 This is the English version of the trilingual notice posted by the Nunavik Regional Board of Health and Social Services in Nunavik’s Inuulitsivik hospital. (Image courtesy of the NRBHSS)

Kasudluak said he had been at the hospital already for two days when he was told he could no longer see his mother.

“I was frustrated. I understood that it’s a precautionary measure, but they had already seen me and interacted with me and seen me with my mother, so I would have assumed that risk of exposure has already passed,” he said.

As well, he said employees and mobile patients continued to come in and out of the secure area to the public area.

“So the quarantine is not really a quarantine if they are not controlling the others,” he said.

As for becoming infected with the coronavirus, Kasudluak said he’s not really worried.

“The risk is from people travelling from the south, so I am more concerned about teachers and hospital workers and people coming up to work,” he said.

As of Monday, March 16, there were 50 confirmed cases of COVID-19 in Quebec, with more expected as test results come in. None so far are in Nunavik but the regional health board said last week that some have been tested.