Three-year plan unclear on how Nunavik will benefit 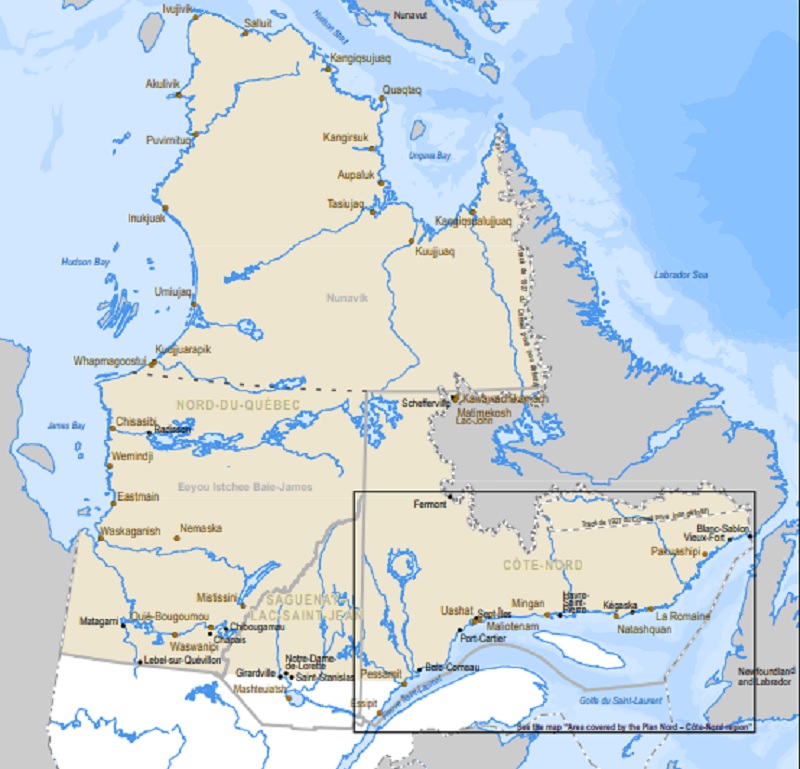 This map shows the area of northern Quebec covered under the government’s new $778-million action plan. (Image courtesy of Government of Quebec)

The Quebec government says it will invest $778 million to relaunch a northern development plan, with the goal to make the province’s north more accessible.

The Plan d’action nordique lists 49 action items over three-years, though only two are specific projects targeted for Nunavik: a new veterinary clinic and an assessment tool to manage drinking water quality in the region.

The other items focus on access to mineral projects in the province, like along the Labrador Trough region, including pledges to extend road networks in that region and develop port facilities near Sept- Îles.

There are also pledges to support general initiatives across Quebec’s north, like tourism, food security and conservation efforts. As with the previous Plan Nord, these initiatives will be managed by government’s Société du Plan Nord.

“This collective and concerted effort is necessary to ensure sustainable development with concrete benefits for northern communities,” said Quebec’s minister of environment and natural resources, Jonatan Julien, in a Dec. 7 release.

“Together, we will put in place winning conditions to live in the North.”

The Plan d’action nordique proposes some telecommunications upgrades, though it’s difficult to say what Nunavik will gain.

The region faces near maxed-out capacity on its current satellite-fed internet, while the regional government works towards a new fibre optic link set to begin serving some communities as early as 2022. Nunavik’s main internet provider, Tamaani, hopes to tap into some new federal funding to boost capacity in 2021.

The plan also includes pledges to launch new telehealth services and a pilot distance education program, while finalizing the rollout of a fibre network to Eeyou itschee in the James Bay region.

But the new plan only commits to “pursue the current project to improve internet services in Nunavik” without saying how.

Seven of the action items are aimed specifically at Indigenous groups and regions in Quebec and will be integrated into the government’s 2017-22 action plan for First Nations and Inuit communities.

“I see this as a great collaboration between the Société du Plan Nord and Aboriginal communities,” said Ian Lafrenière, minister responsible for Aboriginal affairs. “I hope that the new measures will help make Northern Quebec a good place for everyone to live.”