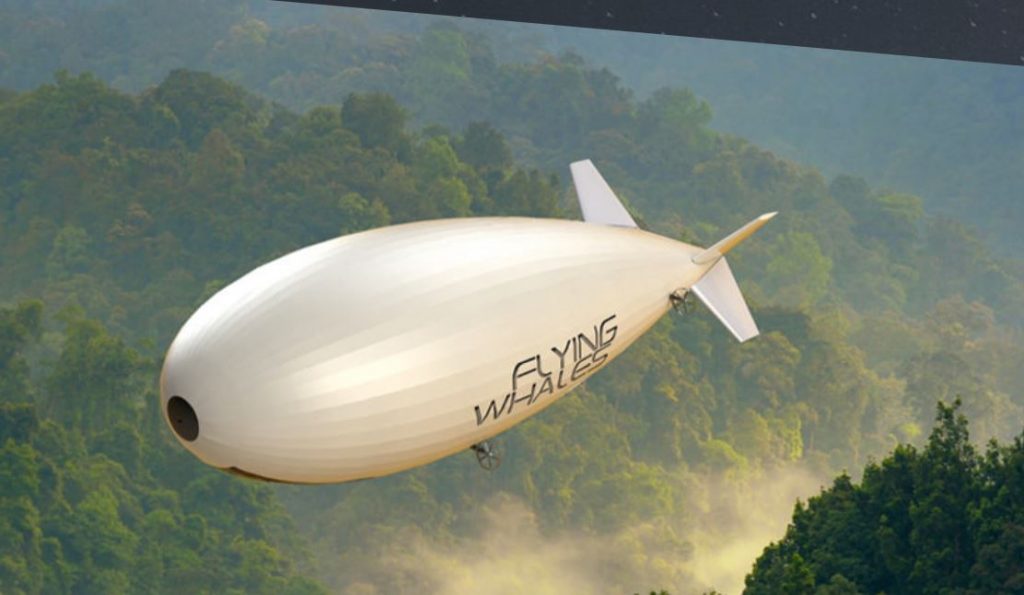 The Province of Quebec now has a stake in Flying Whales, a company working on a hybrid airship, seen in this rendering, that they tout as a possible solution to transportation woes for remote sites. (Image from Flying Whales website)

The next generation of airships could be servicing Nunavik’s communities and mines in coming years, if an investment by the Government of Quebec pays off.

But Quebec Premier François Legault has recently been forced to defend his government’s decision to buy a $30-million stake in the French airship manufacturer Flying Whales, following criticism from opposition legislators.

Last June, the provincial government signed an agreement in principle with Flying Whales while at the Paris-Le Bourget International Aeronautics and Space Exhibition.

Speaking in French, Pierre Fitzgibbon, Quebec’s minister of the economy and innovation, said the technology would help deliver supplies to remote mine northern mine sites, and would “promote economic development and the development of certain regions, notably Nord-du-Quebec,” when he announced the deal on Nov. 13.

On Feb. 4, Legault defended the plan, as opposition legislators in the Quebec assembly demanded access to the study that supported the investment in Flying Whales.

It’s not the first time that plans for these lightweight, low-emission vehicles have been floated as a new way to transport goods to remote, roadless sites in northern Canada.

The previous Liberal government turned a previous—less developed, according to the premier—plan down.

Legault argued Quebec’s aeronautical industry, which has 42,000 employees, is based on innovation, and that requires taking risks.

And this technology does carry its share of uncertainty, as other Canadian ventures have shown.

Among them, in 2011, Hybrid Air Vehicles in the United Kingdom was supposed to deliver its first airship to the Canadian company Discovery Air Innovations. Discovery stepped away from the deal the following year.

Lockheed Martin is also in the game: in 2016, the company met with representatives from the Government of the Northwest Territories to talk about the possibility of airships bringing goods into far-flung places.

Quest Rare Minerals Ltd., owner of the Strange Lake rare-earths mine on the Nunavik and Labrador border, signed an agreement with Straightline Aviation to transport its goods by airship. They would use Lockheed’s LMH-1 hybrid airship, which was expected to be delivered in 2019.

According to the Lockheed Martin’s website, they are “ready to begin construction of the first commercial model.”

But at this point there are no examples of airships operating in the North.

The Province of Quebec paid 20 million euros—or about $30 million—for its stake in Flying Whales.

The majority of this, 15 million euros, is invested in the company at large and 5 million euros in the development of a Quebec-based subsidiary of Flying Whale, Fitzgibbon explained.

The idea is that a portion of the company’s aeronautical program would be hosted in Quebec. Airships would be manufactured and operated out of this subsidiary, serving customers across North, Central and South America.

For the Quebec subsidiary, the provincial government has a 51 per cent stake, and in Flying Whales, 49 per cent, Fitzgibbon said.

In the same announcement, Sébastien Bougon, managing director of Flying Whales, said that modern airships shouldn’t be confused with their predecessors, which quickly lost popularity following the 1937 Hindenburg disaster.

“When we talk about airships, unfortunately, it’s the same word that you all have in mind and which refers to technology of the last century,” Bougon said.

He likened it to assuming the current design of streetcars being akin to their old wooden ancestors. He said the airships of today have nothing to do with the designs that came before.

The Flying Whales airship is lifted by helium, rather than hydrogen, which was used in the Hindenburg, while thrust is provided by a hybrid-electric engine, according to the company’s plans.

The Flying Whales hybrid airship, rendered here, has caught the attention of the Quebec government. The province has invested in the French company to bring a subsidiary operation to Quebec. (Screenshot from the Flying Whales website)

Bougon has discussed the possibility of transporting houses to northern communities where lack of housing is a critical issue.

But the natural resource sector appears to be the target market for the use of these airships.

“There were market studies done in 2018,” said Fitzgibbon. Through the Quebec government’s Plan Nord, he said he travels to all mines in the province and recognizes where the roads and railways stop. “Just for the government, we saw enormous potential,” he said.

Fitzgibbon said they hope to have airships flying by 2021 or 2022. The exact location of the Quebec operation has not yet been set.