New terminal in Inukjuak officially opened less than a year ago

Inukjuak’s beautiful airport terminal looks good, but it has big structural problems, according to the Quebec government, which has filed a statement of claim against the several companies involved in the building’s construction. (Photo courtesy of Evoq Architecture)

The new $14.7-million airport terminal in Inukjuak, which officially opened less than a year ago, was supposed to be light, bright and spacious, both inside and out. 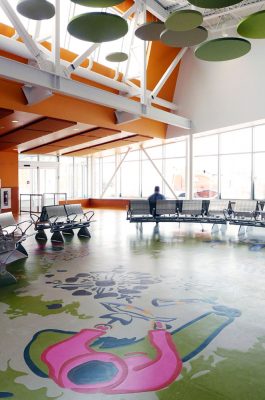 Inside Inukjuak’s airport terminal, it’s all light and space. (Photo courtesy of Evoq)

The orange, red and grey colours, rainbow decorations and leafy-berry plant on the building’s side made for a big change from the previous terminal, a dull, cramped wooden structure, which opened in 1996.

The problem is this swanky new terminal turns out to have serious structural issues—and three years after opening its doors, the building is at risk of falling apart.

The structural deficiencies are so serious that the Quebec government now wants $8 million to fix the terminal built for the community of about 1,800 through money from Quebec’s Plan Nord, as part of a larger $25.2-million airport upgrade.

There appear to be major problems with the waterproofing used in the building’s construction. These could affect the foundation and even cause it to collapse, according to a statement of claim filed by Quebec’s attorney general last week at the Montreal courthouse.

The document, cited by French-language newspapers in recent articles, says in May 2016 there was a “large infiltration of water in the basement of the terminal.”

Water went into the electrical room that supplies power to the airport terminal, runway lights and cargo facility.

Other seepages took place “regularly” during spring run-offs or rain.

The Kativik Regional Government’s transportation department, which operates the airport, flagged a number of “major deficiencies” with the terminal shortly after it opened in 2016 and again in 2017.

The KRG noted that there was a slope leading from the runway apron to the terminal that could result in water accumulation around the baggage door. Automatic doors installed in the new terminal had already malfunctioned and the base of a piece of artwork in the terminal was damaged and needed to be replaced.

Experts cited in the statement of claim, which will be heard in Quebec’s superior court, said the vapour barriers were improperly installed and even ripped in places.

Efforts to fix the problem of leakage into the terminal last fall failed.

Repairs could mean the “reconstruction of the terminal,” the document said.

The Inukjuak airport was supposed to be an example of sustainable design and construction, with the design contract given to SNC-Lavalin Stavibel and the architectural firm Fournier, Gersovitz, Moss, Drolet & Associés, now Evoq Architecture.

Alain Fournier, one of the founding partners of Evoq, designed the former yellow airport in Iqaluit. Evoq also designed airports in Puvirnituq and Kuujjuaq, as well as expansions and renovations to airports in Tasiujaq, Kangirsuk and Quaqtaq.

In Nunavut, the company has also landed some big contacts, including the Canadian High Arctic Research Station in Cambridge Bay, the new Iqaluit Community Daycare Centre, and the Kenojuak Cultural Centre and Print Shop in Cape Dorset.

The Inukjuaq airport terminal is largely a one-storey building covering a surface area of about 8,800 square metres. There is also a crawlspace running through the subfloor. 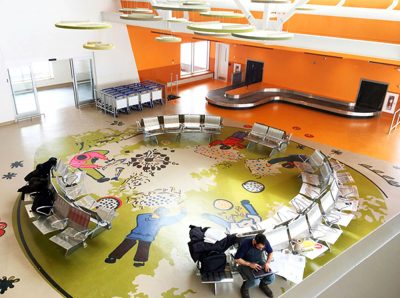 The waiting area in the Inukjuak terminal is in a circular shape and features artwork integrated into the floors. (Photo courtesy of Evoq)

“The proposed terminal has been designed around the idea of a central waiting area where passengers and those accompanying them gather for both arrivals and departures,” reads a description of the project on Evoq’s website, which pegged the project’s cost at $14.7 million,