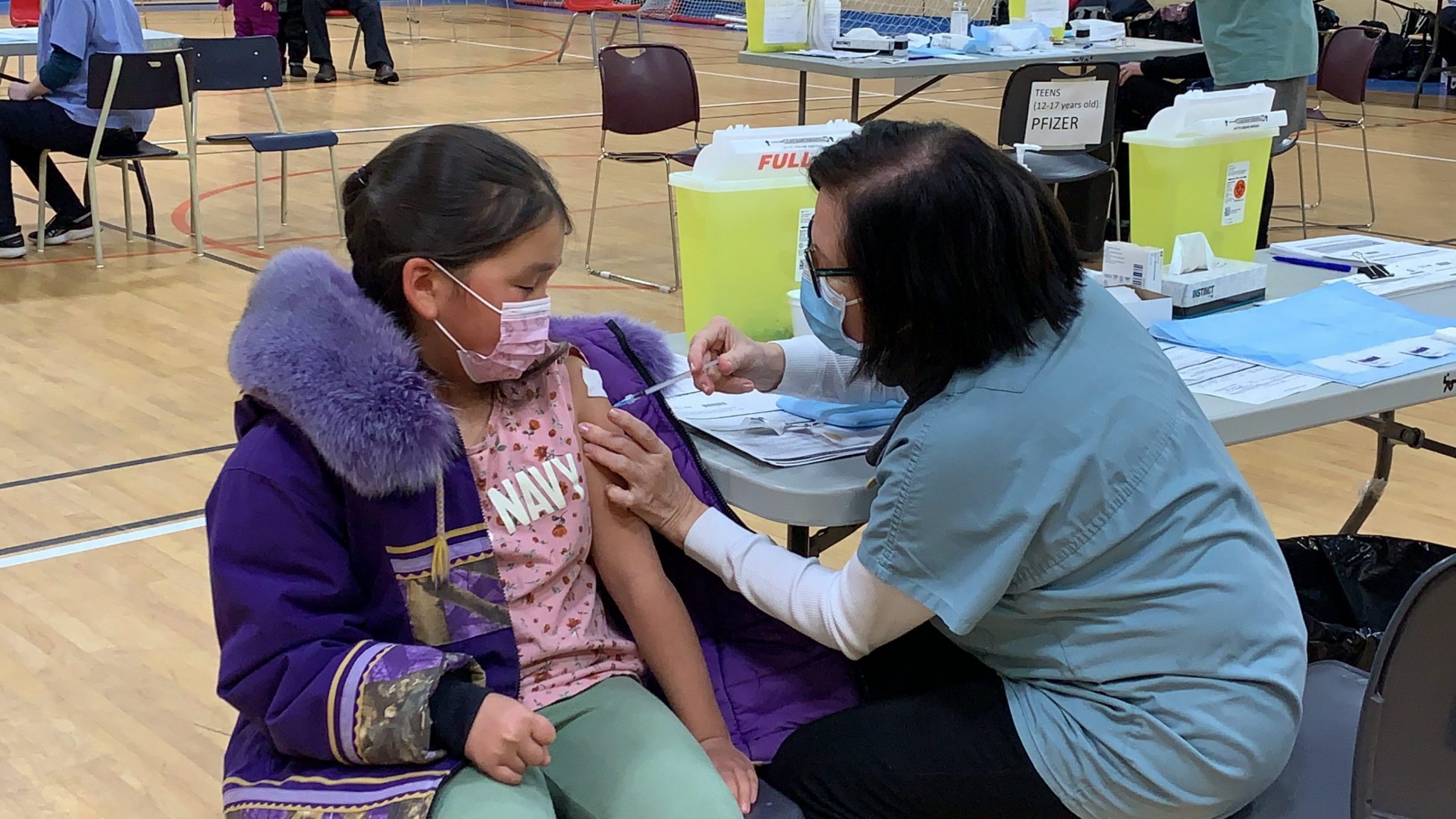 Nine-year-old Lavinia Gordon from Kuujjuaq gets her first COVID-19 vaccine at the Jaanimmarik Ilinniavik school gym on Dec. 9. (Photo by Malaya Qaunirq Chapman)

Quebec’s proposed tax for unvaccinated adults is not the right approach to get more Nunavimmiut vaccinated, says one McGill University professor.

Richard Budgell is a Labrador Inuk who teaches Inuit and northern health for McGill’s Department of Family Medicine.

He says he wants to see more Nunavimmiut get vaccinated against COVID-19. However, in Nunavik, where many people live with lower incomes and vaccine hesitancy is common, a financial penalty would be “highly inequitable.”

“You want to give people reasons to want to be vaccinated, as opposed to punish people for not being vaccinated,” he said. “I don’t think it’s a good strategy in relation to Nunavik at all.”

Nunavik, like the rest of Quebec, continues to battle a record number of COVID-19 cases, which has put a strain on the province’s health system.

“The idea is that everyone who is not vaccinated for non-medical reasons will have to pay a contribution,” he said, in French.

Nunavik’s vaccination rate is 52 per cent, according to the latest immunization figures published by the Nunavik Regional Board of Health and Social Services.

Vaccination rates vary by community. Tasiujaq has the lowest rate with 39 per cent, and Kuujjuarapik has the highest rate with 70 per cent. However, these figures are much lower than the average across the province, which reports a vaccination rate of 82 per cent.

Budgell said Inuit in Nunavik may be resistant to vaccines due to online misinformation, as well as a mistrust of southern-based government institutions and public health.

He pointed to an approach used in the Nunatsiavut region in which health-care workers contact people over the phone, provide information about vaccinations, and give the option to have their vaccine administered at home.

“That kind of approach, I think, frequently works, you make it as easy as possible for people to get vaccinations,” he said.

Legault’s announcement has drawn mixed reviews, as well as calls for debate in Quebec’s national assembly.

Legault’s government will table a bill when the National Assembly resumes in the first week of February with more details about the tax, the premier announced during a Jan. 13 news conference.

Opposition parties will have the opportunity to vote for or against the bill and debate any amendments “if necessary,” he said.

Nunatsiavut health-care workers contact people over the phone for vaccine outreach. An earlier version of this story stated they did so by going door to door.