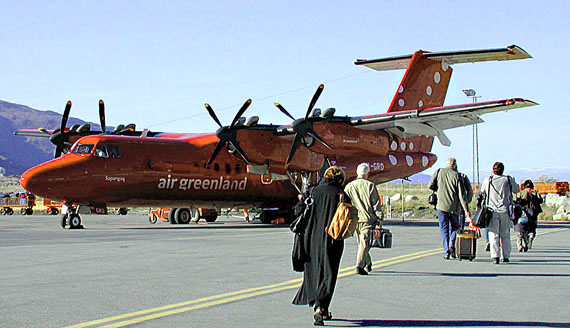 Air Greenland won’t be reviving the air link between Nunavut and Greenland in the near future due to a lack a potential business. (FILE PHOTO)

Plans to re-launch an air link between Iqaluit and Nuuk, Greenland have been grounded for now, says Greenland’s major airline.

Officials on either side of Davis Strait recently stepped up a campaign to re-establish a scheduled link between Nunavut and Greenland that last operated in 2001, when Air Greenland and First Air stopped their weekly jet service between Iqaluit and Kangerlussuaq.

“But we’re not really seeing any demand right now,” Keldsen said. “Nobody has actually approached us… to travel on a regular basis.”

Keldsen said the airline needs a fixed passenger base to re-launch the link, such as businesses that are interested in commuting between Nunavut and Greenland on a weekly basis.

“At this point, no one’s really come forward,” Keldsen said.

Airline officials have also considered Halifax or St. John’s as its Canadian destination, but Keldsen said “Iqaluit makes the most sense.”

That’s because the Nunavut and Greenland governments have expressed interest in increasing bureaucratic and cultural exchanges, as well as improving access to Iqaluit’s Arctic College and Ilisimatusarfik, Greenland’s university. The two institutions that are working together towards a new Arctic nursing diploma.

At the opening of Greenland’s parliament in Nuuk last fall, the country’s premier, Kuupik Kleist, mentioned the possibility of restarting flights between Canada and Greenland.

Air Greenland was scheduled to begin a route between Nuuk and Iqaluit in 2010, but those plans were dropped.

A later attempt to establish jet service between Greenland and the United States also failed.

Iqaluit and Nuuk are less than two hours apart by direct flight across the Davis Strait.

By contrast, Iqaluit is more than three hours from Ottawa – the launching point for a three-day, 12,000-kilometre journey to Nuuk via Copenhagen, Denmark.

But Air Greenland had bigger concerns this week, when ash from an erupting Icelandic volcano closed Greenlandic airspace May 26 and forced the airline to cancel most of its flights, stranding 1,000 passengers.

“We’ve looked at all alternatives, but neither Canada nor Iceland are possible,” he said. “We expect to fly both Saturday and Sunday, provided that the ash cloud permits it.”