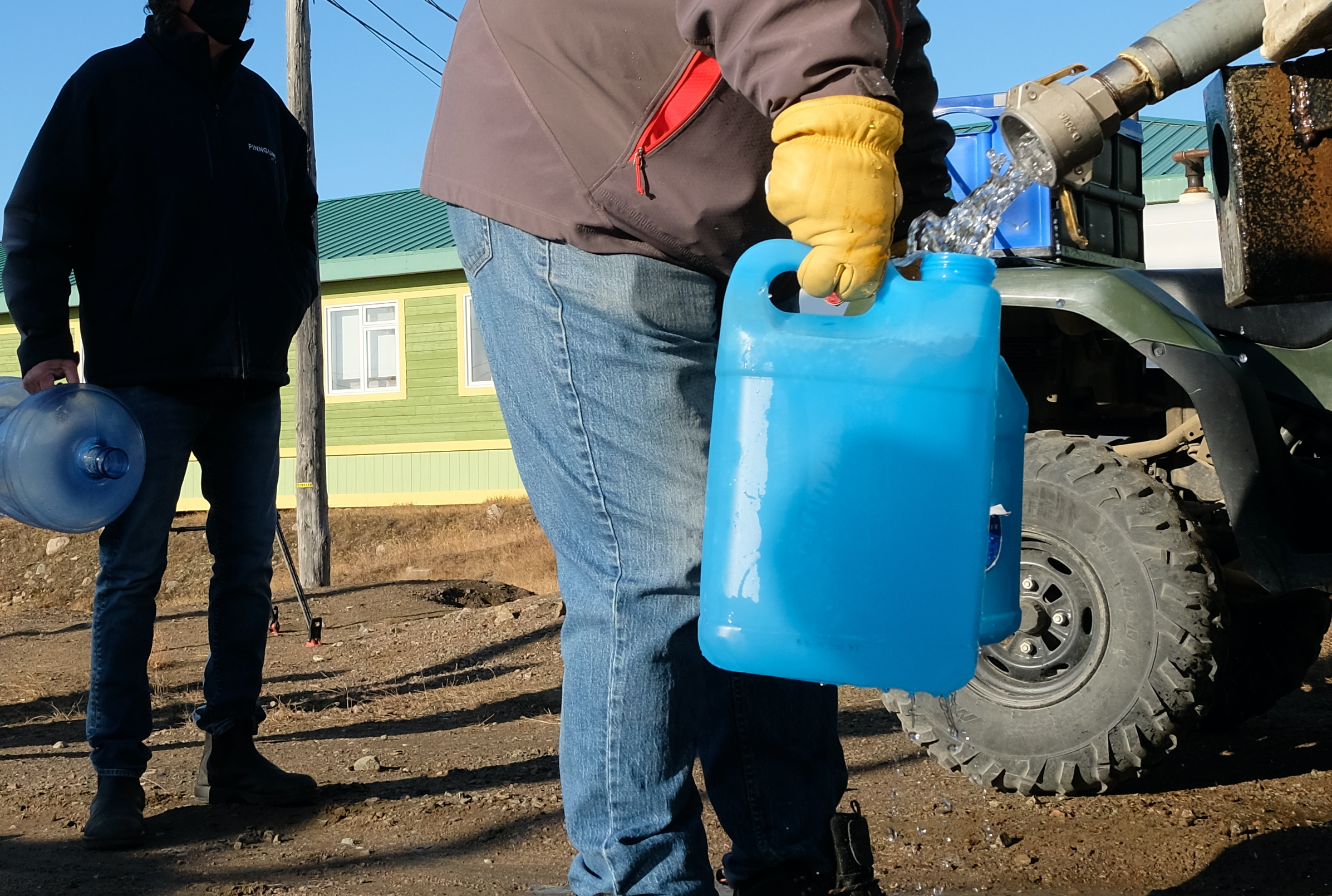 A person fills up a water jug in Iqaluit on October 13. Duane Wilson, vice-president of Arctic Co-op, said the company is determining if it has more cases of pre-mixed baby-formula it can send on a flight to Iqaluit on Friday. (Photo by Mélanie Ritchot)

At least 35 cases of ready-to-drink baby formula will soon be on the way to Iqaluit after an Ottawa woman arranged with Arctic Co-operatives Ltd. to get the product on a flight Friday.

Claudine Santos is the director of parliamentary affairs to Nunavut Senator Dennis Patterson. She is also the president and co-founder of VIO Volunteers, a non-profit organization that was formed during the pandemic to support northern remote Indigenous communities get access to PPE and other emergency products.

When news broke on Tuesday of Iqaluit’s water emergency — with people being warned to not drink tap water, as it is believed to have fuel in it — Santos decided to use $10,000 sourced from the non-profit, personal donations and a contribution from Patterson to buy baby formula for families in Iqaluit.

“While the city [of Iqaluit] is doing a great job at trying to get water to residents, a lot of parents are looking for … ready-to-drink formula that doesn’t need to be mixed with water, [which] would be a significant support for these parents at a time of crisis,” Santos said.

Santos began reaching out to corporate sellers and manufacturers directly to find someone who could help her secure a bulk order. She said that’s when Arctic Co-op stepped in and looked at what it had in stock.

“This is something we do on a weekly basis, just now [in] more of a rush,” said Duane Wilson, vice-president of Arctic Co-Op.

The company will fly all 35 cases of formula it had in its Winnipeg warehouse on a Cargojet flight, scheduled to arrive in Iqaluit Friday afternoon. On Friday the company also plans to send bottled water from its Saskatchewan warehouse and will see if there is any formula available that can be sent on the same flight.

After determining if there is still a need for more formula beyond what Arctic Co-op has secured so far, Santos will continue to reach out to organizations who can help get it to Iqaluit.

In addition to potentially $10,000 worth of baby formula, Santos is also hoping to buy $5,000 worth of safe-to-swallow toothpaste that won’t require residents to brush with water. The president of Canadian North has agreed to fly the cargo to Iqaluit for free if needed, said Santos. She hopes she can find the products and have them ready for a flight by Friday or Saturday at the latest.

Initially, Santos faced some roadblocks when she tried to buy formula in-person. She had attempted to buy $10,000 worth of non-mix baby formula from the South Keys Walmart in Ottawa earlier on Thursday but was prevented from buying more than 10 packs at a time.

“Anything over 10 is considered a bulk order,” Santos explained. “We would have to … order online and wait however many days for that to come, and as you know, in the middle of the crisis, the clock is ticking.”

The manager of the South Keys store declined to comment for this story. Nunatsiaq News has reached out to Walmart Canada headquarters for comment.

“This is a massive priority, a huge, huge crisis, and we’re going to try and do everything we can to support the residents,” Santos said.

Others are sending supplies to Iqaluit as well. A GoFundMe started by Andrea Andersen to purchase water jugs for Iqaluit’s 8,000 residents has already raised over $1,000. The donation page says the campaign will order jugs from southern Canada, which will be shipped via cargo and distributed to community members once it arrives.

Additionally, in a media release Agnico Eagle Mines said it will be shipping approximately 15,000 litres of potable drinking water by cargo flight to Iqaluit on Oct. 15.