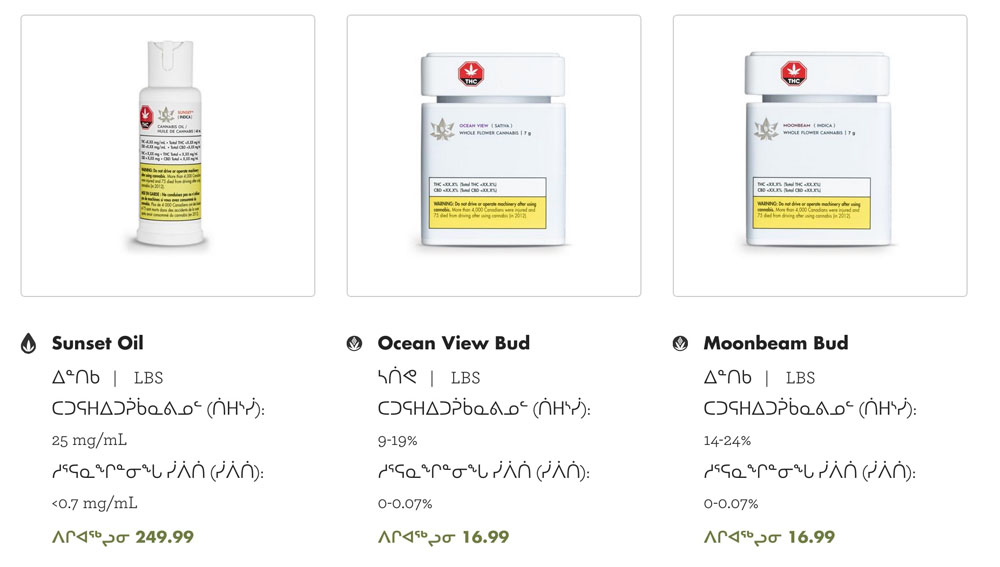 The range of products available to Nunavut consumers at the Tweed.com online cannabis store has expanded. Also, the Government of Nunavut has added a second supplier, Agmedica Bioscience Inc. of Chatham, Ont. The GN will announce later when Agmedica’s products will be available online. (Screenshot)

“I like to think it is an economic development activity the communities could take a look at,” Finance Minister George Hickes said on Friday, March 8, in response to remarks made by Arviat North–Whale Cove MLA John Main.

Main also asked whether the Department of Economic Development and Transportation is willing to help small business people, rather than big players like North West Co. and Arctic Co-ops Ltd., get into retail cannabis sales.

“When you look outside of Northern and Co-op, there is probably interest in this area, but if we’re going to promote economic activity, it would be nice to support small business,” Main said.

Hickes responded by saying those are the kinds of questions his staff are trying to answer through their regulatory development work.

But the Government of Nunavut is still working on regulations to guide such a licensing system. They will consult with Nunavut Tunngavik Inc. during that process and were planning to send a letter about it to NTI, Hickes said.

In response to a question from Rankin Inlet North–Chesterfield Inlet MLA Cathy Towtongie, Hickes said it’s hard to predict when that work will be done.

“Those regulations are being worked on right now. I don’t have a firm timeline. We made sure that within the legislation that we allowed it. So we’re working on the regulations,” Hickes said.

And he also said the GN is working with the federal government on the sales of cannabis edibles and consumables.

That would likely include products like cannabis gummy bears and brownies. The federal government has yet to issue regulations for such products over fears that children could get sick if they eat them by mistake.

This suggests many Nunavut consumers are still purchasing cannabis through the illegal black market. On social media, many have complained about the limited options available during the early post-legalization period.

On that point, Hickes suggested that could change after retail store sales start up in Nunavut.

“I think, in my personal opinion, the sooner we get the retail sales available, that is what is going to start making an impact on the black market sales. There is some desire to get that done sooner rather than later,” Hickes said.

Also the range of products available at Tweed.com has expanded since last December, when only four or five products were available.

The Nunavut Liquor and Cannabis Commission has also signed up with a second supplier, Agmedica Bioscience Inc. of Chatham, Ont.

Until now, Agmedica has specialized in medical cannabis, but is now branching out into the recreational market, and recently signed a deal with the Ontario Cannabis Store.

The company also says they now have supply agreements with seven provinces and territories.

But Agmedica products are not yet available online to Nunavut-based customers.

“Nunavummiut will be informed once AgMedica’s online sales are up and running,” a GN spokesperson told Nunatsiaq News.

And the GN continues to seek more suppliers.

“The NULC is also working on securing additional suppliers through its request for expressions of interest, with the intention of continuing to expand sale offerings and services,” the spokesperson said.