Retired Nunavut minister remembers his first Christmas in the Arctic

An excerpt from Rev. Mike Gardener’s memoir, Called to the Arctic 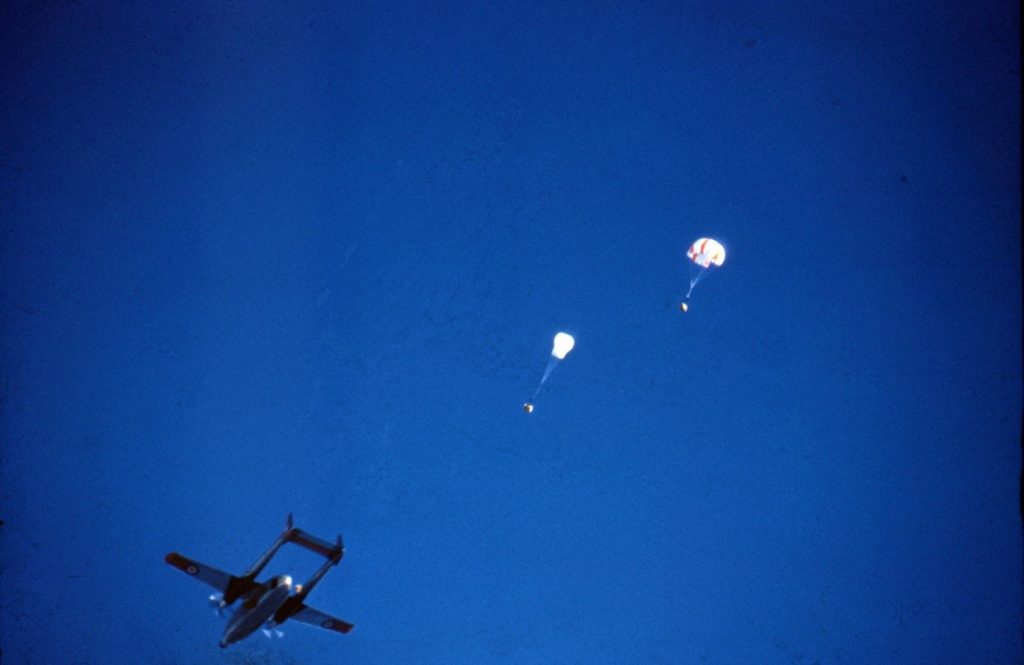 Kimmirut in the 1950s had no telephone service and no scheduled flights. After the supply boat had visited in the summer, residents looked forward to the Christmas mail drop, when an airplane flew over the community and dropped mail by parachute. (Image courtesy of Mike Gardener)

The following is an excerpt from Rev. Mike Gardener’s memoir, Called to the Arctic, in which he describes his first Christmas in the Arctic, in Kimmirut in 1955. After spending more than 50 years serving the Anglican Church in Nunavut, Gardener is now retired and living in Ottawa with his wife Margaret at the Embassy West senior residence.

My First Christmas in the Arctic

Christmas came around — a great time to meet up with families from far-away camps. They came into trade at the one Hudson Bay Co. store as well as to celebrate Christmas.

There was no community hall in Kimmirut, except an old rundown dance hall, which was a relic from when the Americans were there in the ‘40s during the war. The USAF had had a little out-station there as a branch of the DEW Line.

As the church was the only place to meet at Christmas time, people would come to the church for the 11 o’clock service. When the service was over, there would be a big batch of what we would call “bean stew,” brought to the church.

This stew was really a great conglomeration of everything people had donated to help make a stew. The police would go around and get their donation of food items from the people living in Kimmirut. These had to fill about a 10-gallon vat. The RCMP and the HBC worked together, as the HBC manager there, Gordon Rennie, his clerk, and the two police members would make the stew. Gordon was quite a character from Newfoundland and had worked with the HBC since he was 17. They all arranged to have the stew brought to the church around 12:15, together with camp stoves, to brew up tea.

Whole families came dressed up in their parkas, bringing their enamel, rather chipped, mugs and maybe a spoon and a plate. There were no paper plates in those days. This great big vat of bean stew would then be doled out to the people. You’d think they’d never get through that 10 gallons of bean stew. There would be 200 or more people to feed sitting on benches in the church, all crammed up together. It was quite a tight fit but it worked and people were very happy, laughing and joking away. 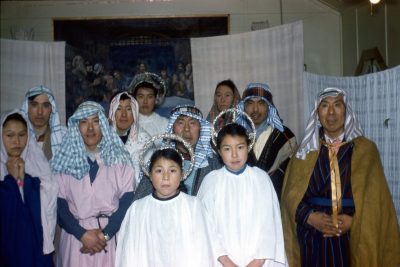 A special time to celebrate! Nearly all had come in from their isolated camps and camped out in Kimmirut for this real festive occasion. The cold did not seem to bother them, as they had to sleep in tents in December. After I had been in Kimmirut for a year there was also a nativity play that I had organized. This is remembered to this day!

Then, after that, people went to the various places where they were staying — later on they would all troop down to the sea ice. There we played outdoor games, maybe races or some sort of wrestling games or various contests of skill and strength, where everyone laughed and had fun and enjoyed it. Then another service in the evening.

After we had been there for a second Christmas, we had more organized activities and games. After Christmas people would go back to their various isolated camps.

They had come in before Christmas with their dog teams — the dogs in the community of Kimmirut were all howling to greet the dogs coming in from the camps. Over Christmas there were hundreds of dogs all tethered up and howling together, which made quite a grand symphony as they saluted each other. It seemed that there was always a clear moonlight night around that time of year. It was a very beautiful picture, with the light from the moon and stars reflecting off the pure white snow.

There were in addition the sensational flickering coloured northern lights. It was cold but we didn’t mind that then! Altogether everything made it a very special northern picture for Christmas.

I made some great friends there in Kimmirut and people who I’ll never forget, most of whom I’m afraid are not living as I write this book.

What was I going to do about Margaret? By this time, Margaret had been sent to Pangnirtung, after having waited in Churchill for the hospital and supply boat, the C.D. Howe. It was a six-week journey from Churchill to Pangnirtung, where she was going to be the cook.

She was put there so we wouldn’t have a “sinful relationship” in Kimmirut! Another reason was the Bishop’s past experiences with those missionaries who had gone as married couples from the south: when the wife didn’t like the North, they both had to quit. That had meant that the husband would go as well and return to the South.

The Bishop lost his man because he had to follow his wife who didn’t want to be in the North. So the Bishop had the idea that it would be best to let missionaries go North unmarried, and live in two different communities, apart from each other. Then if the woman did not like the North, the man would not be forced to go back South with her. At least that was his theory!

I wondered, “How am I going to contact Margaret if she’s in Pangnirtung and I’m in Kimmirut, 300 miles apart?” The only way was by single sideband radio at the Hudson Bay Company. No such thing as a phone then and no scheduled flights either. Also there was no mail contact, other than by a Christmas mail drop and on the supply boat in summer. That was also a great joy to me when Christmas was about to come. You would see the plane come over the community and drop the mail by parachute.

I have to side-track to tell one story about this mail drop. The policeman’s wife there in Kimmirut had ordered a dinner service set from Eaton’s. When the parachute drop came, everything went fine, except for one parachute that failed to open — and as you might have guessed, her precious dinner set was in the basket attached to that parachute! Everything was shattered.

The whole community got very excited when the mail drop was coming. Catalogue orders and all the personal mail was coming — we would be in touch with friends and family again!

The plane also dropped three or four Christmas trees, which landed upright in the snow and made them look as if they had been growing there all the time. It was great to get letters and for me to know that all was well with Margaret. You can imagine how lonely and concerned I felt at times. How was I going to contact her, keep in touch with her and things like that?

Likewise, would she get my letters to her, which became almost a book, in her Christmas mail drop? She did!

Called to the Arctic: the Memoirs of the Rev. Mike Gardener is available at Amazon.