Science centre exhibit explores past, present of the Arctic 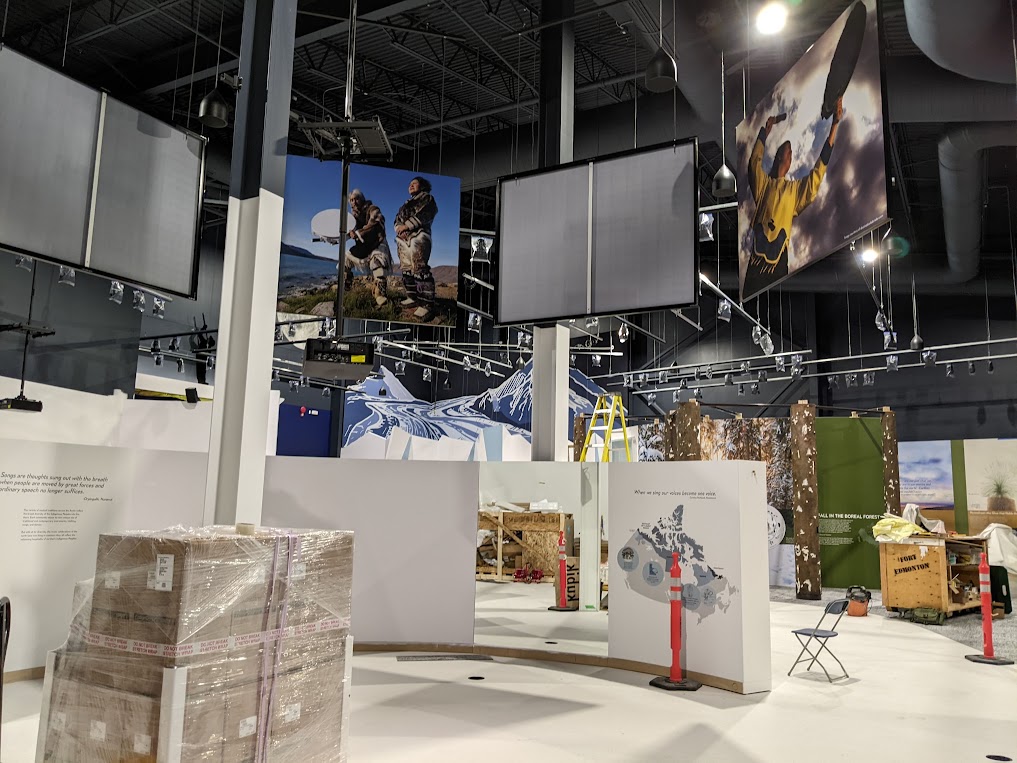 Behind the scenes at the Arctic Journey exhibition, which is set to open at the Telus World of Science in Edmonton, Alta., on Sept. 17. (Photo courtesy of the TELUS World of Science)

The story of the North will be told in the West through a new exhibit that explores the past and present of the Arctic.

The Arctic Journey exhibition opens Sept. 17 at the Telus World of Science in Edmonton, Alta.

Using audiovisual effects, as well as objects that reflect Indigenous Arctic communities including the Inuit, Innu, Dene and Gwich’in, it aims to present the history and culture of the region. 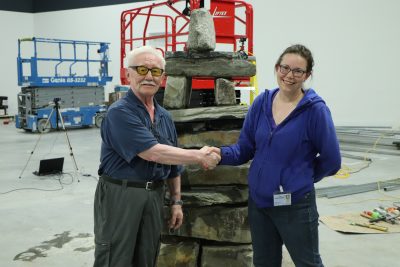 The purpose is to “help create respect for Indigenous ways of knowing,” said Jennifer Bawden, senior manager of exhibits at the Telus World of Science.

She said that’s why everyone involved in creating the exhibit worked with a Northern advisers circle and project consultants, many of whom are Indigenous themselves.

“We’re a science centre … but science and Indigenous knowledge work together to give a really full picture of the North,” Bawden said.

“[The Arctic] is this space that a lot of us don’t get to go to, but we should know about it — we should listen and hear and appreciate the Arctic.”

Along with the history of Indigenous communities in the Arctic, the exhibit will share knowledge about Arctic geography and wildlife through the four seasons.

Visitors will experience what it’s like to go fishing in the Mackenzie River, and can imagine an Arctic winter through a film where they can hop on an Inuit dogsled and ride across sea ice behind a dog team.

“We have a big curved screen and the film [about Arctic winters] is shot from the perspective that you are the one that’s driving the dog sled and [the seats] vibrate so you can feel yourself bouncing over the sea ice,” Bawden said.

“It’s a really cool experience for this desire to help you feel that sense of connection [to the Arctic] from here in Edmonton.”

As part of the exhibit, the science centre worked with elders such as Piita Irniq to help share cultural elements and traditions that are sacred to them as well. 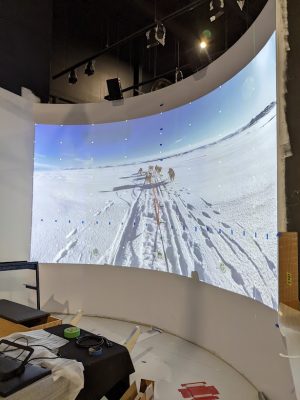 Arctic Journey will share knowledge about Arctic geography and wildlife through the four seasons. Those visiting will get to simulate an Arctic winter through a film where they can hop on an Inuit dogsled, for example, and ride across sea ice behind a dog team. (Photo courtesy of the Telus World of Science)

Irniq, who was born in what is now Naujaat in Nunavut, built a window-shaped directional inuksuk for Arctic Journeys. Known as niungvaliruluk, it is a type of man-made stone landmark used by the Inuit to point to a place of significance.

Irniq, who spent a week in May building the stone structure on site, described an inuksuk as a “symbol of survival.”

“Inuit would have never survived as people (otherwise) because inuksuit were always built in areas of good fishing, caribou hunting and seal hunting around the coastal regions of the Arctic,” he said.

“They were messengers to future hunters, future travellers on the land.”

Through the inuksuk and other Inuit history that’s presented, Irniq said he hopes visitors to Arctic Journey will learn about inuuqatigiittiarniq. An ancient Inuit word, he said it means “living in love, compassion, caring for one another, respect, helping each other, peace and harmony.”

“A lot of non-Indigenous people will get an opportunity to be educated, to be informed, and to learn a lot about Inuit history and harvesting animals,” Irniq said.

Correction: This article has been updated from an earlier version to correct the spelling of inuuqatigiittiarniq.