A potential “lifesaver” for kilt makers 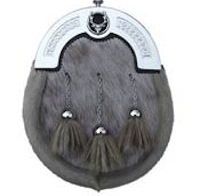 Kilt makers who need sealskin for their sporrans — the traditional, fur-covered pouches worn for centuries by tartan-clad Highlanders, show here in a photo from kiltmakers.co.uk— may turn to Inuit hunters for their furs.

Scottish kilt makers, angry over Europe’s approval of a prohibition on the import of seal products, say they may turn to Canada’s Inuit in a bid to skirt the ban and maintain enough supplies of sealskin for their sporrans — the traditional, fur-covered pouches worn for centuries by tartan-clad Highlanders.

Describing the proposed Inuit supply chain as a potential “lifesaver” for kilt makers, Chisholm pointed to special exemptions for Inuit hunters under the European ban, which has been slammed by the Canadian government and Inuit organizations.

“There’s a possibility that we may be able to still use the sealskins if they have been hunted as part of traditional culture,” Chisholm told The Daily Telegraph. “Nothing beats sealskin. It has a quality of its own. It has a beautiful lustre against the tartans of the kilts.”

Chisholm recently told Postmedia News that kilt makers faced the end of an era once existing supplies of sealskin run out for makers of sporrans.

Synthetic fur substitutes or replacement animal skins from muskrat, horse and rabbit “don’t have the same appearance as the seal skin,” he said at the time.

The ban, which had been scheduled to take effect Europe-wide on Aug. 20, is currently in limbo pending a European court ruling on legal challenges filed by various opponents, including Canadian and Greenlandic Inuit.

Canada’s national Inuit organization, Ottawa-based Inuit Tapiriit Kanatami, is among the plaintiffs in a lawsuit seeking to overturn the ban, including an intended “exemption” for Inuit hunters that would still prohibit larger “commercial” imports of seal products to Europe.

“In our view, the seal ban is both illegal and immoral,” ITK president Mary Simon stated last month.

“I can only hope that the EU Court will determine that the ban and its so-called Inuit exemption are illegal.”

Chisholm, who runs a family kilt-supply business that began in the 1950s, said his shop still has about 150 sealskin sporrans in stock and that several suppliers have enough seal fur stockpiled to last a number of months.

“That can be used up” under the seal-ban regulations, he said. “But these (stockpiles) will gradually be run down.”

Ed Ferguson, whose North Bay, Ont.-based Fur Harvesters Auction Inc., is a leading Canadian supplier of seal pelts, told Postmedia News Sept.20 that Canadian Inuit who supply pelts to him remain wary of the legal implications of exporting sealskin to Scotland or to any European market.

“Any new market would be really welcome,” Ferguson said. But he added that despite recent expressions of interest from kilt makers in obtaining sealskin supplies from Inuit, hunters in Nunavut are concerned about how European regulators would classify the terms “traditional” and “commercial” under terms of the ban.

Meanwhile, however, animal-rights activists in Britain are pressing kilt makers to abandon all animal-based materials for manufacturing sporrans, urging them to acquire synthetic, “vegan” alternatives.

Muskrat pelts from Canada are among the sealskin substitutes now being used for the kilt accessory, and the aquatic rodent is on a list of “victims” that animal advocates want saved from makers of sporrans.

An Edinburgh-based group called Ethical Voice for Animals is planning a march in the Scottish capital on Oct. 2 to push for an end to the use of all animal fur in making sporrans.

The group is promoting the demonstration under the slogan: “Sporrans: For Scotland’s Sake . . . Make it Fake!”

“The ban on seal products in the EU spells the end of seal-fur sporrans,” the group states, “but other animals — including mink, fox, chinchilla, rabbit, badger, bobcat, beaver (and) muskrat — continue to be killed for their skins.”