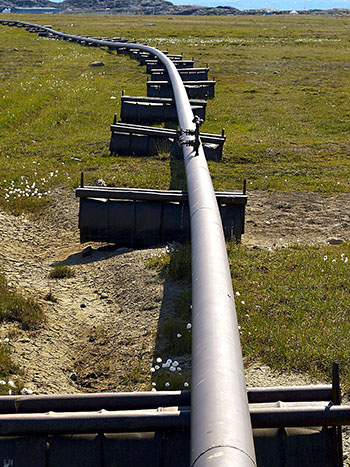 People in Resolute say they aren’t persuaded about the need to replace their utilidor system – which is similar to Iqaluit’s system, shown here- with trucked water and sewage delivery. (PHOTO BY CHRIS WINDEYER)

After 35 years with no worries about running out of water during storms or waits for sewage tanks to be emptied, people in Resolute Bay aren’t eager to lose their utilidor water and sewage service.

As in Iqaluit and Rankin Inlet, insulated above-ground and underground pipes bring in fresh water to the community’s 60 homes, businesses and public buildings.

Resolute’s water flows from nearby Char Lake, thanks to a system set down by the Canadian military in the 1970s.

But, starting in 2011, the Government of Nunavut wants Resolute to switch over to a trucked water system, because GN-hired consultants say it will cost $29.5 million to bring the hamlet’s utilidor up to par and build a sewage lagoon.

Currently there is no sewage lagoon attached to the utilidor system, so piped waste dumps directly into the sea.

Recently there have been some leaks in the utilidor pipes, leading to ice build-up during the winter.

A team of consultants and bureaucrats from the GN’s department of community and government services recently told the hamlet that its utilidor network must be scrapped or risk a “catastrophe” if the aging system ever breaks down during the winter.

Learning that the GN wanted to pull the plug on the utilidor system was “quite a shock,” said Duncan Walker, Resolute’s SAO, who still hasn’t see the study leading to the decision.

Walker isn’t sure that implementing the trucked system will cost less than repairing the current utilidor system.

The GN told him that changing over to a trucked system would cost about $10 million.

This includes the purchase of two water trucks, two sewage trucks, the construction of new garages as well as renovations to houses, which will need water reservoirs, sewage tanks and the space to house the new equipment.

“We would like to see the study to see the cost of the changeover,” he said.

If the utilidor is in as bad shape as the GN maintains, it’s because the territorial government didn’t want to pay for the system’s regular maintenance, he said.

In 2006, the GN finally set aside more than $1.2 million budgeted for repairs on Resolute’s utilidor.

At a recent community meeting with the GN, Resolute residents said they weren’t pleased by the plan to bring in trucked water service.

“We’re all spoiled by it,” Walker admitted.

Residents said they were worried about the health of water that sits in tanks for days and possible water shortages when there can be no water delivery and waste pick-up due to bad weather.

Having a functional utilidor system has also been as a plus for Resolute, Walker said.

Resolute is slated to house a Canadian military training centre.

The hamlet, population 200, is also in the running to become the site of the new Arctic research station, which could create 50 new jobs in the town.