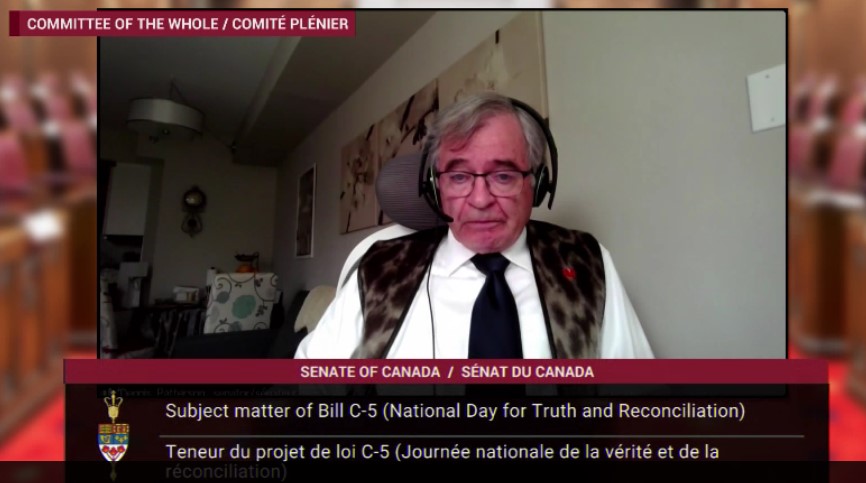 Nunavut Senator Dennis Patterson, speaking during a Senate debate Thursday, compared Canada’s new National Day for Truth and Reconciliation to Remembrance Day because they both emerged from Canadians’ desire to reflect on problems that have plagued society. (Screenshot courtesy of Senate ParlVU)

Canada’s new National Day for Truth and Reconciliation should be compared to Remembrance Day because they were both born during periods of raised “collective consciousness” of Canadians, says Nunavut Senator Dennis Patterson.

“This national day that is being set aside to honour the Indigenous lives lost at residential schools cannot be one celebrated by ‘some’ Canadians. Like on Remembrance Day, we must ensure that all Canadians take the time to pause and reflect, as this bill envisions,” Patterson said Thursday in a speech in the Senate before a vote that created the new holiday.

After the Senate vote, the bill was given Royal Assent Thursday night, making it a law.

Patterson pointed out that Remembrance Day began as an occasion to celebrate the 1918 armistice agreement that ended the First World War.

“Remembrance Day was established at a time when the collective consciousness was acutely attuned to the atrocities of war,” he said.

Last week’s discovery of a mass-burial site at a former residential school in Kamloops, B.C., has focused attention across the country on the abuses that took place at residential schools, which operated until as recently as 1996.

“I believe it took the tragic discovery in Kamloops to really awaken many Canadians to the realities of our country’s dark legacy,” Patterson said.

But like Remembrance Day, the National Day for Truth and Reconciliation will only apply to federal government workers at a cost of what Patterson estimated to be nearly $390 million a year. It will be up to each territorial and provincial government to decide if it would be a public holiday for other workers.

Orange Shirt Day is an annual unofficial commemoration of survivors and victims of residential schools. It has grown in popularity since 2013 after former student Phyllis Webstad publicly told her story about arriving at a residential school, wearing an orange shirt given to her by her grandmother, only to have it taken away from her.

Guilbeault said the new holiday should be observed for the first time this September.

“We must act quickly so that this date becomes part of our reality this year,” Guilbeault said.

Conservative Senator Don Plett accused the Liberal government of “virtue signalling” by enacting a new holiday instead of acting on other calls to action made by the Truth and Reconciliation Commission.

It’s easier for the government to give bureaucrats a day off, Plett said “than to work on the more pressing but difficult issues that are facing Indigenous communities every day of the week.”

Plett said the day should be a memorial day, “not a day to stay home, put our feet up and watch TV.”

Guilbeault said the new holiday will be a “solemn day” to reflect and remember, calling education a “pillar of reconciliation.”