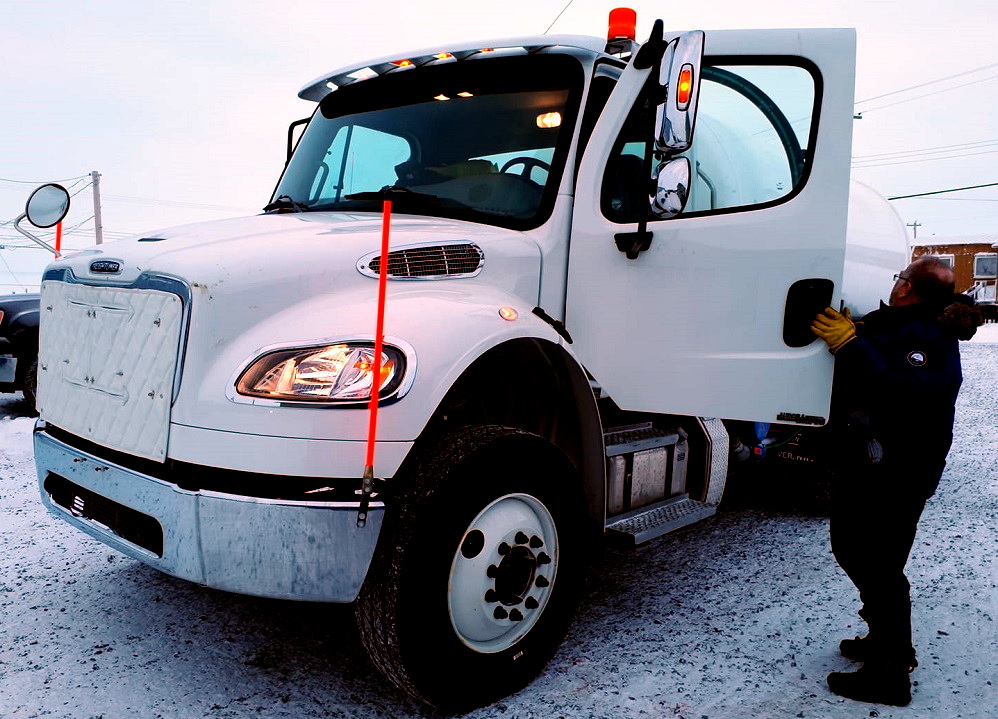 One of Baker Lake’s two new sewage trucks arrived in the Kivalliq community earlier this week. With four trucks on the road, the hamlet said it’s equipped to service the community until a new truck is delivered via sealift later this year. (Photo courtesy of the Hamlet of Baker Lake)

With two new sewage trucks on the road, the Hamlet of Baker Lake says it’s once again able to provide full service to the community of 2,000.

On Jan. 29, an early morning fire burned through the hamlet’s six-bay garage, which housed the hamlet’s fleet of sewage trucks—six of its seven trucks were parked there that Tuesday morning—as well as two front-end loaders, a dump truck and a garbage truck.

The hamlet has since had the use of a sewage truck from Agnico Eagle’s neighbouring Meadowbank mine on a rotating basis, while another two new trucks were flown in by Hercules aircraft from the Northwest Territories earlier this week.

With four trucks now in service, the hamlet says it will continue on a modified schedule for several months, in which trucks will stay on the road for longer hours until Baker Lake can order in another sewage truck to be delivered by sealift later this year.

Baker Lake’s municipal council meets next on Feb. 21, at which point councillors will discuss that purchase, as well as the replacement of the destroyed garage and the other heavy machinery that was lost in the fire.

“We would like to thank the people of Baker Lake for working together after the fire that took so many of our municipal service vehicles,” said the community’s deputy mayor, Karen Yip, in a Feb. 7 notice.

Nunavut Fire Marshall’s office continues to investigate the cause of the fire. But the hamlet said, based on the information it has received, the fire was accidental and not arson.

The hamlet has not determined what, among its losses, will be covered by insurance.