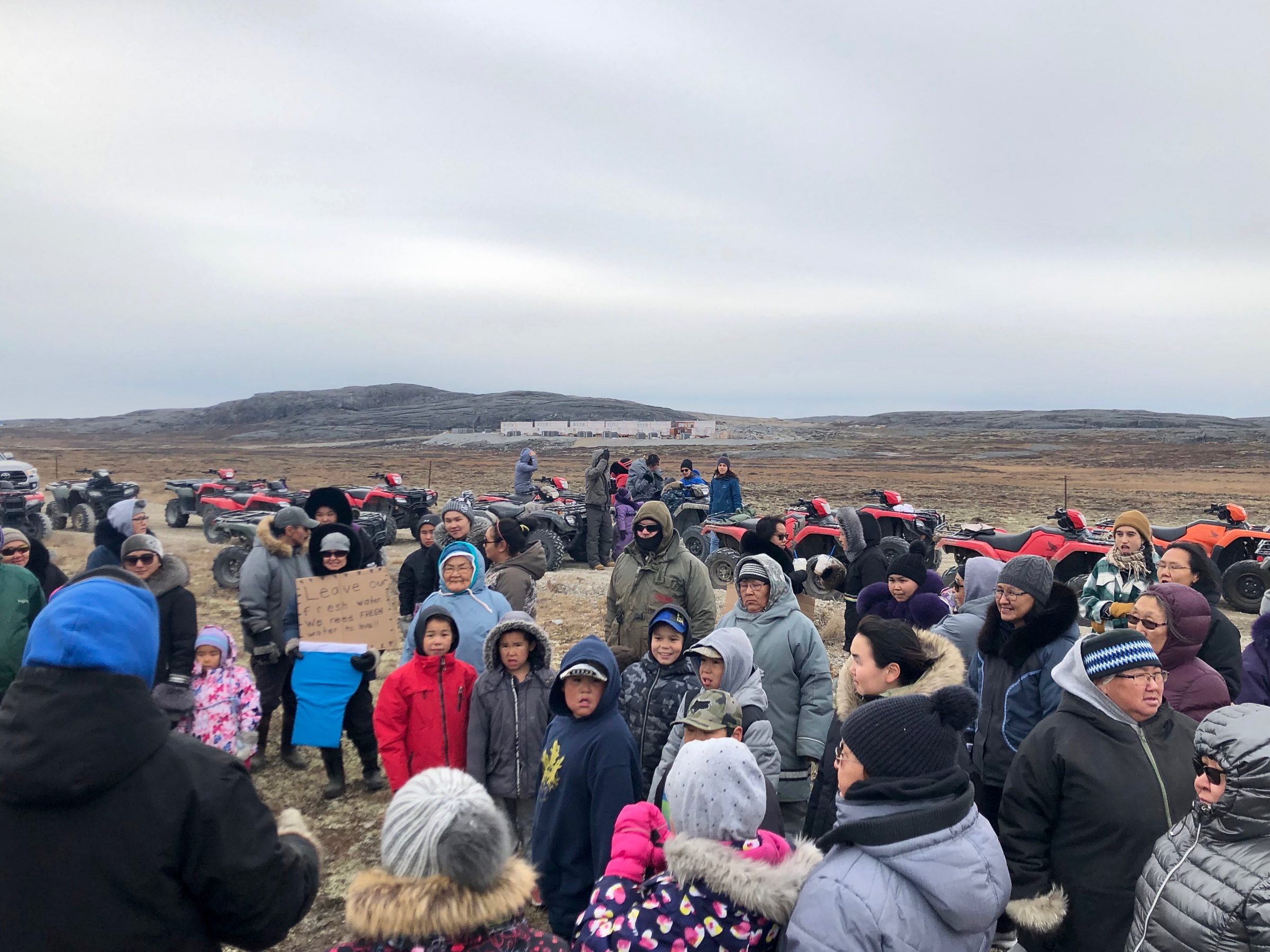 Protesters gather at the site of the Innavik Hydro Project outside Inukjuak, Nunavik, on Oct. 20. (Photo by Deseray Cumberbatch)

Shortly after Thanksgiving, 86 community members gathered in Inukjuak to share their concerns about the hydroelectric dam project underway at the edge of town.

The Innavik Hydro Project is a partnership between Pituvik Landholding Corp. and Innergex, a southern renewable energies engineering firm. Though iterations of the project have been on the books since 2008, the final 7.5-megawatt run-of-the-river dam passed environmental assessment in August.

Site preparation for the project began this fall, with construction set to start in spring 2020.

At the two-hour meeting organized by concerned community members on Oct. 15, the consensus was that Inukjuamiut were not properly informed or consulted about the dam, said Charlie Nowkawalk.

The Kativik Environmental Quality Commission held public hearings on the Innavik project in Inukjuak in March. Its final report and decision were released in July, authorizing the project with 10 conditions.

In its report, the commission notes that the March hearings saw 40 people show up over the course of two meetings on March 11. A call-in session was broadcast on the radio on March 12. The conditions the commission laid out were largely in response to concerns heard from community members.

Those behind Innavik have since gone on the radio to discuss the details of the project, but Nowkawalk said the questions of the people opposed to the project go unanswered.

Nowkawalk, along with Deseray Cumberbatch and Billy Palliser, was nominated by those at the meeting to lead the resistance against the hydroelectric project.

Since that meeting, the group also held a protest at the dam site on Oct. 20 and continues to gather the concerns of the community.

Eric Atagotaaluk, president of Pituvik, said the landholding corporation is working on a plan to address the concerns of community members. With a new board just elected last month, they’re still figuring out what exactly that response will be.

But he said more community sessions are being planned in the near future.

The impact the dam will have on the Inukjuak River and the ecosystem it supports has people worried. “We rely on the river a great deal and rely on the sea ice for our survival, for food,” said Palliser.

Nowkawalk said that Innavik isn’t planning to clear vegetation around the flooded area. That raises concerns that decomposing vegetation could release mercury into the water.

Atagotaaluk said, in an emailed response to Nunatsiaq News, that no such clearing was planned as there are no trees upstream of the facility and experts warned against clearing the existing vegetation in the flooded area.

But Cumberbatch said that mercury has already been found in the area’s wildlife. “Animals like snow owls, lemmings and muskrat have mercury here,” said Cumberbatch. “So, it’s in our tundra.”

Fish monitoring has already begun to establish baseline levels of mercury in the river.

Atagotaaluk said that several elements of the Innavik project indicate that there is not a significant risk of increased mercury levels in fish. That’s largely because the design of the dam, being a “run-of-river” project, does not have a large reservoir of standing water.

Approximately 65 hectares, or just over half a square kilometre, will be flooded for the dam, adding to the existing course of the river.

The areas that are flooded are mainly bedrock, rather than soil, Atagotaaluk said, which he said lowers the risk of mercury contamination.

The monitoring program that began pre-construction is continuing, looking for any potential changes in mercury concentrations in fish. “Communication will be maintained with the community if fish consumption guidelines are to be updated,” said Atagotaaluk.

A spillway is being built for fish migration next to the dam, as well as new spawning beds to replace those lost in the dam’s development. But residents opposed to the project are still concerned about how it could alter the fish population.

There is also the issue of the 2010 referendum that allowed the dam project to move forward. Proponents set their own target of a 75 per cent response rate on the question of whether or not to build the dam. Only 71.6 per cent of eligible voters cast a ballot.

At the time, Atagotaaluk said they set the 75 per cent target for themselves, wanting to see a high turnout. But he said above 70 per cent was close enough to get a fair sampling of opinions. Of those who voted, 83 per cent were in favour of dam construction.

Nonetheless, some in the 1,700-person community remain hesitant.

“We want to have a fair and respectful discussion and a find a solution,” Nowkawalk said.

The group also noted that there are other ways to decrease carbon emissions that don’t require damming the river. Wind turbines are one example that have been used in Nunavik. Quaqtaq is considering a turbine installation and two are installed at Raglan Mine.

“My main argument is that I want to preserve the fresh water as it is because it is our main basic need, it’s naturally rich and it’s priceless,” said Cumberbatch.

“A lot of people know the earth has so much water but it’s not getting any cleaner, so the fresh water is something that I would like to preserve and keep as natural as possible.”