Spectators optimistic Simon will give country the ‘right direction’

Dozens gather outside Senate for glimpse of history-making Governor General 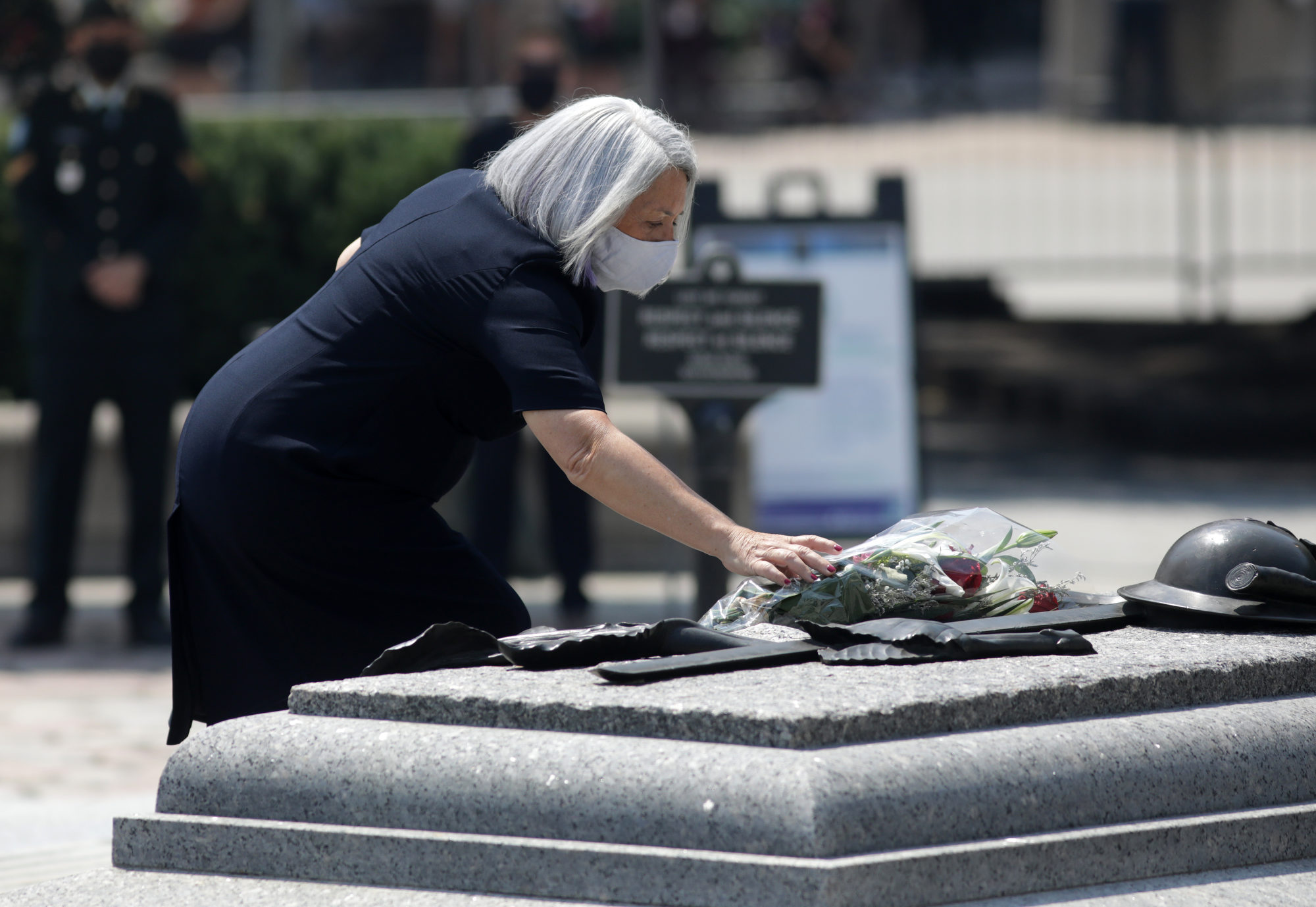 Governor General Mary Simon lays a bouquet of flowers on the Tomb of the Unknown Solder at the War Memorial in downtown Ottawa on Monday. (Photo by Mike Carroccetto, special to Nunatsiaq News)

The relatively muted ceremony — compared to previous installations — drew dozens of spectators, with many expressing optimism that appointing an Inuk woman to the position signals a positive step forward for the country.

“I think this is the most exciting day in our history of governor generals,” said Joan Johnston. “Mary Simon’s incredible skills are so needed right now in this country. I hope it means we’re moving in the right direction in our history.”

Spectators stood in front of the Chateau Laurier hotel along Rideau Street, hoping to catch a glimpse of the official procession. Simon and her husband Whit Fraser arrived by car, quietly and slightly ahead of schedule, before stepping onto the red carpet where they were greeted by Prime Minister Justin Trudeau and his wife Sophie Grégoire Trudeau.

Before entering the Senate building, the entourage observed the lighting of the qulliq by elder Sally Webster and enjoyed a traditional drumming performance by the Ottawa River Singers.

Musician Keith Flamand took part in the performance and said he believes Simon’s appointment is a meaningful step towards reconciliation.

“Having an Indigenous woman as Governor General is history and I’m happy to be part of that,” he said. 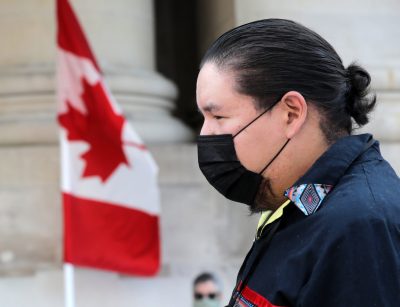 Likewise, Joanna Crilly expressed confidence that Simon is well-equipped to fill the role as the Queen’s representative in Canada.

“Finally, [we have] someone who has an Indigenous background and who’s so eminently qualified. She’s a true leader in her community and hopefully will be a true leader for all of us,” she said.

Once inside the Senate chamber, Simon’s first speech as Governor General was delivered in English, French and Inuktitut, the first time a Governor General has addressed the country in three languages. In her speech, Simon took care to address national calls for healing in the wake of thousands of unmarked graves being identified at the sites of former residential schools across Canada.

“I have always viewed Canada as a metaphor for family. As members of our large and diverse Canadian family, we have to replace the hurt with hope and find the grace and humility to stand together and move towards a more just and equitable future,” she said.

Katie Dean is hopeful that having Simon in a position of influence will help enact meaningful change for Indigenous people.

“Maybe getting more Indigenous representatives in our Parliament will actually enable them to make some clear concise change. I feel like when you’re trying to make any kind of change in a movement, it takes years, and you cannot give up. I feel like she’s like the epitome of that — she never gave up,” she said.

Soon after signing the documents that officially made her Governor General, Simon and her procession were led by marching soldiers towards the National War Memorial where a larger crowd of bystanders had gathered. As the Governor General laid a bouquet of flowers at the Tomb of the Unknown Soldier and the 21-gun salute rang loudly through the air, pro-Palestinian demonstrators could be heard chanting and seen waving flags on nearby Elgin Street. Otherwise, the energy of the crowd remain subdued. 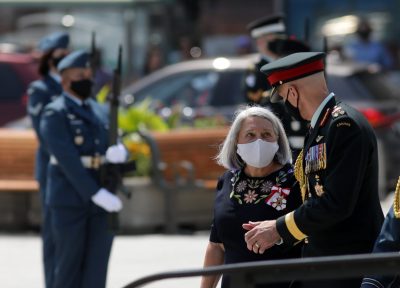 Despite the significance of Simon being the first Inuk woman to become Governor General, there was no noticeable organized Indigenous presence in the crowds.

Born in Kangiqsualujjuaq, Nunavik, 73-year-old Simon has gained international recognition for her work on Arctic and Indigenous issues and is known as an advocate for Inuit rights and culture. Along with other Indigenous leaders, she was a key player in the negotiations that led to the 1982 patriation of the Canadian Constitution, which formally entrenched Indigenous and treaty rights in the supreme law of Canada. Among many other notable distinctions, Simon is an Officer of the Order of Canada and an Officer of the Ordre national du Québec.

Lois Cherniak was moved by Simon’s appointment, and felt it was important to bring her seven-year-old grandson Bryce Copeland to see the historic ceremony.

“I think her appointment brings out all our good history and our bad history too and makes us more aware that what wasn’t taught in school should have been a long time ago,” she said. “I’m telling Bryce that this is history in the making right now. I hope he remembers this when he grows up.”