Outcome could influence projects planned for Pangnirtung and Rankin Inlet 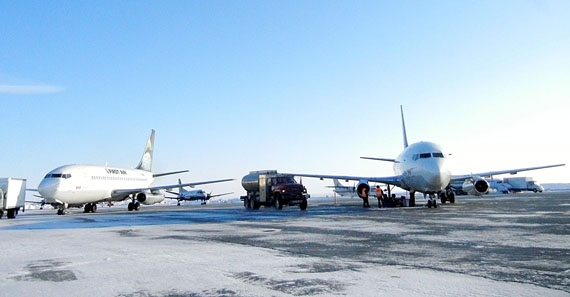 Rankin Inlet’s airport is one of the focuses of a study that will look at how quickly permafrost is thawing. (File photo)

A research project will look at how quickly permafrost is thawing at airports in 16 Nunavut communities.

The project, largely funded by the federal government and led by the Government of Nunavut, will collect ground temperatures up to 15 metres deep.

Researchers will compare the results with previously collected data from a dozen communities across the territory to document long-term trends, said Andrea McFaul, a spokesperson from the Government of Nunavut’s Department of Economic Development and Transportation.

Pangnirtung and Rankin Inlet will be focuses of the project because new airport infrastructure is being planned for both communities, McFaul said.

There are existing sites with cables that measure temperature and equipment that records the information, called dataloggers, she said. Those dataloggers will be replaced and the old ones will be analyzed.

The data will influence the design of airport infrastructure, such as runways, and may help identify communities that are experiencing changes quicker than previously thought, McFaul said.

The project’s focus is mainly on air transportation, but McFaul said other community-based infrastructure projects may be a part of the study.

Thawing permafrost can cause the foundations of buildings to sink and make roads and runways heave and buckle.

“A better understanding in this area will help enhance levels of service and safety, support better management of operating and maintenance budgets, and enable effective decisions about how to design and build new infrastructure that effectively serves the territory,” said Sau Sau Liu, spokesperson from Transport Canada, in an email to Nunatsiaq News.

Transport Canada will fund up to $349,000 of the research project, while the Government of Nunavut will provide $116,335, according to a March 3 news release.

The project is part of a larger initiative that was created by Transport Canada to help communities across the North adapt transportation systems to climate change.

The initiative, called the Northern Transportation Adaptation Initiative, funds different research and development projects across the territories and northern Quebec and Labrador.