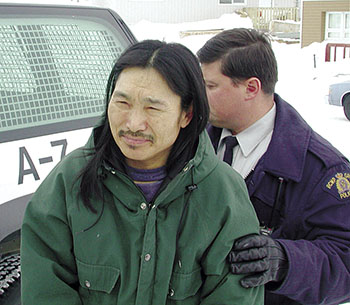 Convicted cop-killer Salamonie Jaw at an early court appearance in Iqaluit, shortly after he was charged with the 2001 murder of Cst. Jurgen Seewald. (FILE PHOTO)

Salomonie Jaw will continue to serve a life sentence for the 2001 murder of RCMP Cst. Jurgen Seewald after the Supreme Court of Canada rejected his appeal Friday.

In a 7-2 ruling, the court upheld the original trial verdict. The majority dismissed the argument by Marvin Bloos, Jaw’s lawyer, that Justice John Vertes made an error in law in his instructions to the trial jury.

Vertes told jurors to consider Jaw’s behaviour after the lethal shotgun blast that killed Seewald. Jaw threatened to commit suicide and walked past the dying officer.

“There is no suggestion that the verdict was not reasonably supported by the evidence or that the jury was swayed by this misstatement in a way that could have resulted in an unfair trial,” wrote Justice Louis LeBel.

Justices Ian Binnie and Morris Fish dissented, arguing that Vertes instructions encouraged jurors to make conclusions on Jaw’s intent when he pulled the trigger based on his actions after the shooting.

Writing the dissenting opinion, Fish argued that Vertes’ instructions could have lead the jury to conclusions “prohibited by law” and that Jaw should have a new trial.

“The judge’s instruction was plainly erroneous in law but, even if it were merely ‘confusing,’ any uncertainty as to its meaning and effect would surely have to be resolved in the accused’s favour and not in the Crown’s favour,” Fish wrote.

The verdict means Jaw will continue to serve a life sentence, with no chance of parole for another 21 years.