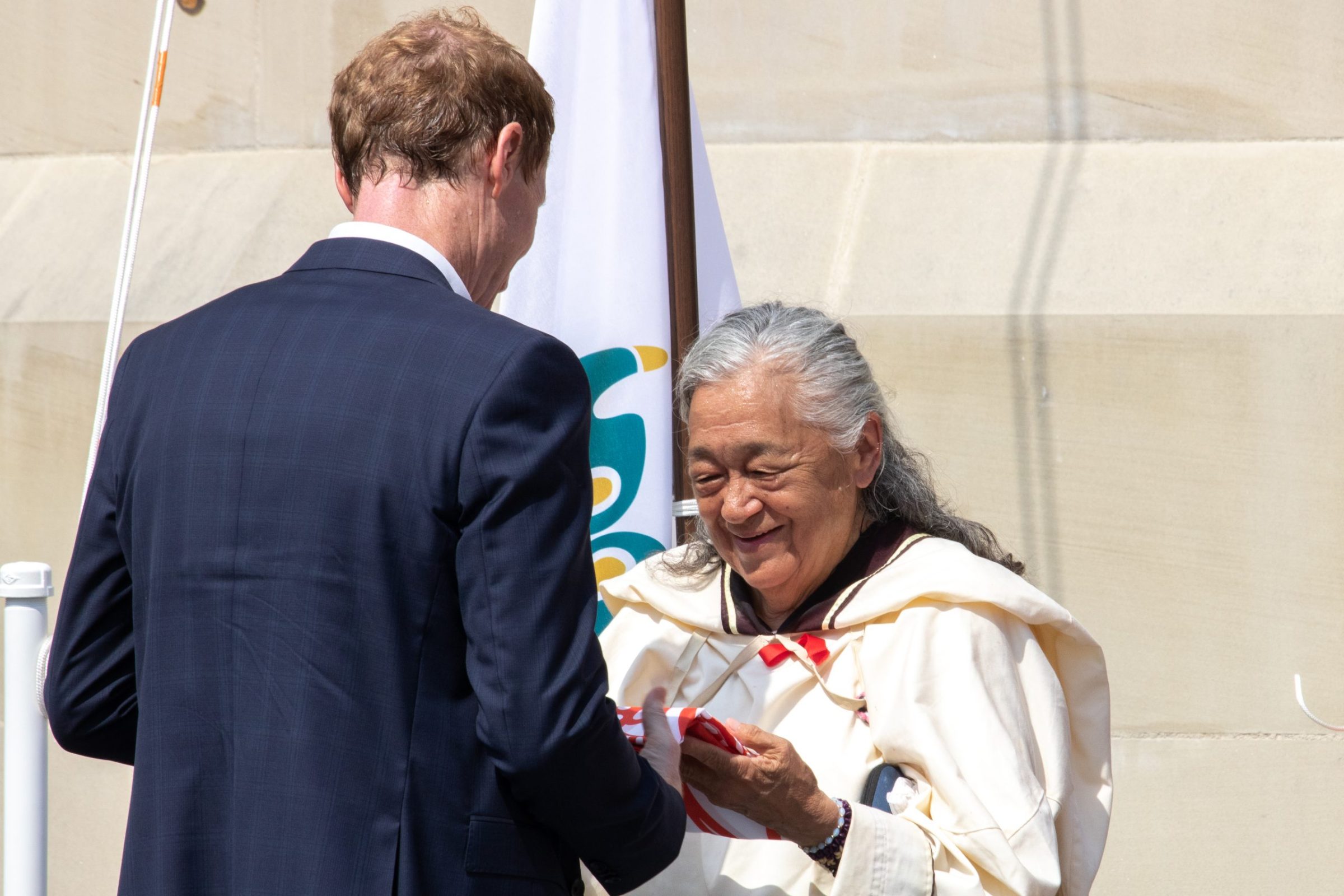 On Monday, the Survivors’ Flag was raised in a ceremony attended by dozens of survivors and their families, as well as Prime Minister Justin Trudeau and several MPs and cabinet ministers.

First unveiled by the National Centre for Truth and Reconciliation in 2021, the flag honours the people and communities impacted by residential schools.

It will be a fixture on Parliament Hill for the next two years.

At the ceremony, several of the survivors who contributed to the flag design spoke including Levinia Brown, the former Nunavut MLA for Rankin Inlet South—Whale Cove, herself a survivor of the residential school system.

Wearing her amauti parka despite the humid Ottawa weather and temperatures pushing 30 C, Brown shared what she hopes visitors to Parliament Hill take away from seeing the flag.

“I thank everyone who makes the effort to listen to what the survivors say,” she said. “My hope is that people will choose love and kindness to break the limitations and hurt imposed on those who cannot speak for themselves.

“My hope is also that everyone sees the Survivors’ Flag as a symbol of choosing love and kindness.”

An estimated 150,000 Indigenous children were taken from their communities and families and sent to residential and day schools in Canada from the late-1800s through the 1990s.

Many children suffered abuse there, or never returned home.

Several of the speakers acknowledged the flag’s location on the Hill, which is near the West Block, the temporary home of the House of Commons while construction takes place. Visitors can see it from all parts of the lawn, and MPs will see it as they head to the House of Commons.

Trudeau acknowledged the significance of the location during his remarks and thanked survivors for sharing their stories.

“Our cabinet room is overlooking this flag, so we will be able to — as we deliberate on the important path forward of this country — be reminded that every child matters,” he said.

“This flag is going to be a very important thing on this parliamentary precinct.”

Piita Irniq, a residential school survivor who presented Pope Francis a drum during the pontiff’s visit to Iqaluit last month, was one of several Inuit in attendance at the ceremony in Ottawa on Monday.

Saying he feels “relieved” a month after the papal visit, Irniq said he was happy to see the flag raised on Parliament Hill.

“It is very important to remember all those young people who were buried,” Irniq said. “Canadians have a responsibility to remember what happened.”

The ceremony included singing and drumming performances, as well as a prayer by elder Claudette Commanda.

In a press conference that followed the ceremony, federal Crown-Indigenous Relations Minister Marc Miller responded to a question about why the flag will only be on Parliament Hill for two years.

“I think the idea was how do we commemorate, in a more permanent fashion, this ongoing search for truth,” Miller said.

“In my mind, the flag should fly for as long as it takes, but this was the idea behind it, was to have it for a temporary period and we landed on two years.”

Stephanie Scott, executive director of the National Centre for Truth and Reconciliation, said she would love to see the fly for longer.

However, she said, it will likely be included as part of a residential school memorial that will eventually be opened in Ottawa.

Scott said all Canadians are welcome to acquire a Survivors’ Flag of their own, but they should do it with a commitment to learn and work toward the path of reconciliation.

“It is absolutely crucial that we work together, and in memory, every day look at that flag and say that there’s respect, honour, and we’re going to work together moving forward,” Scott said.