Yes, We Have No Bananas — Revisited 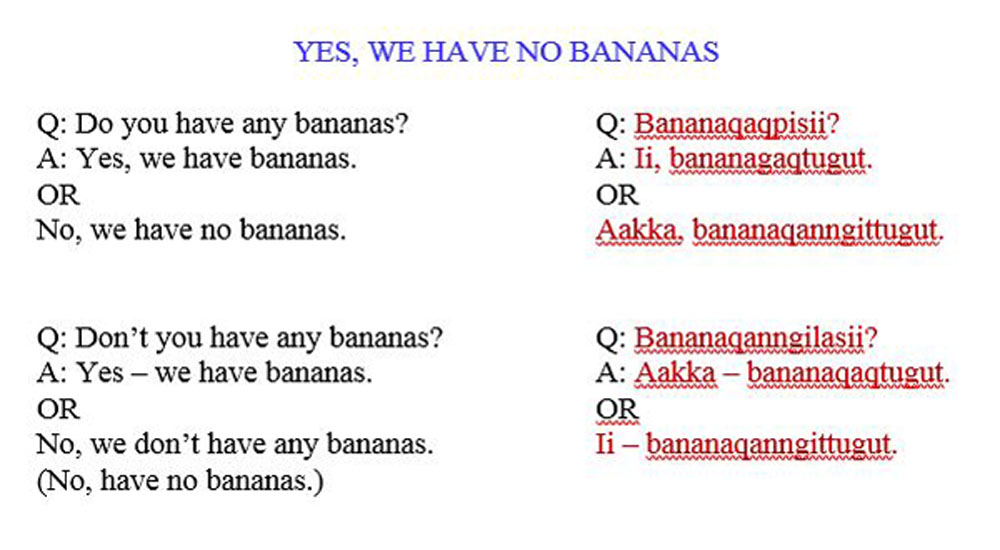 In Inuktitut, the answer to a negative question is the opposite of what it would be in English.

A few weeks ago, I attended a symposium at Mystic Seaport, Connecticut as part of their Death in the Ice exhibition about the lost expedition of Sir John Franklin.

I spoke on Inuktitut interpreting on the Franklin search expeditions. In addition to talking about the interpreters themselves—and there were a number, both Inuit and non-Inuit—I also talked about some of the structural differences between Inuktitut and English that might have led to difficulties in understanding.

One of those difficulties would have been understanding the answer to a negative question.

This is one of the trickiest things for a student of Inuktitut to wrap his or her head around. It bedevils Qallunaat students as well as young Inuit who may be relearning their mother tongue.

Imagine a British searcher, through his interpreter, questioning an Inuk in the mid-1800s about whether he had seen a ship in the ice.

Imagine that, to verify whatever information he had already learned, he asked something like, “Didn’t you see it?”

If the Inuk had seen the ship, he would reply using the word for “No” whereas the questioner might have expected the answer “Yes.”

This could lead to all sorts of misunderstanding, and to a belief that the Inuk was wrong, or lying, or confused, or giving inconsistent information.

To illustrate the point, I used an article that I had published in Taissumani a few years ago. It illustrates the difficulty in a humorous way. Here it is:

“Yes We Have No Bananas” was the title of a popular song in the 1920s. Sung by Eddie Cantor in the 1922 Broadway revue “Make It Snappy,” the song became a hit the following year.

There is no consensus as to the song’s origin, but it is meant to be sung with the accent of a southern European immigrant to New York—the grocer in the song is a Greek.

This song is a wonderful aid in teaching one of the finer points of Inuktitut language. One of the earliest difficulties that new students encounter in learning Inuktitut is how to answer a negative question.

Let’s look at how questions are asked and answered in Inuktitut. And, for the sake of having a noun to ask about, let’s use the banana.

There is no translation of banana into Inuktitut. It’s simply banana, a loan word from English. A purist might point out that Inuktitut words don’t start with “b” and that the middle “a” would be lengthened, and so the word should really be “panaana.”

But for purposes of this discussion I’m going to ignore that and simply use “banana.”

So, a customer might ask our Greek grocer this question:

“Do you have any bananas?”

This question is phrased in the positive. And if the grocer has bananas, the answer is simple:

If the grocer doesn’t have any bananas, the answer is also simple:

In Inuktitut, this is straightforward, just as in English (and I will use the plural “you” since the answer uses “we” rather than “I”):

But the matter gets tricky when the question is asked in the negative.

Imagine that the customer comes into the shop, looks around for bananas, but doesn’t see any. He turns to the humble grocer, and asks, in English:

“Don’t you have any bananas?”

Now in English, if the grocer actually has bananas (the customer just hasn’t been able to find them), the grocer might answer:

But if he, in fact, does not have any bananas in stock, he would answer in English: 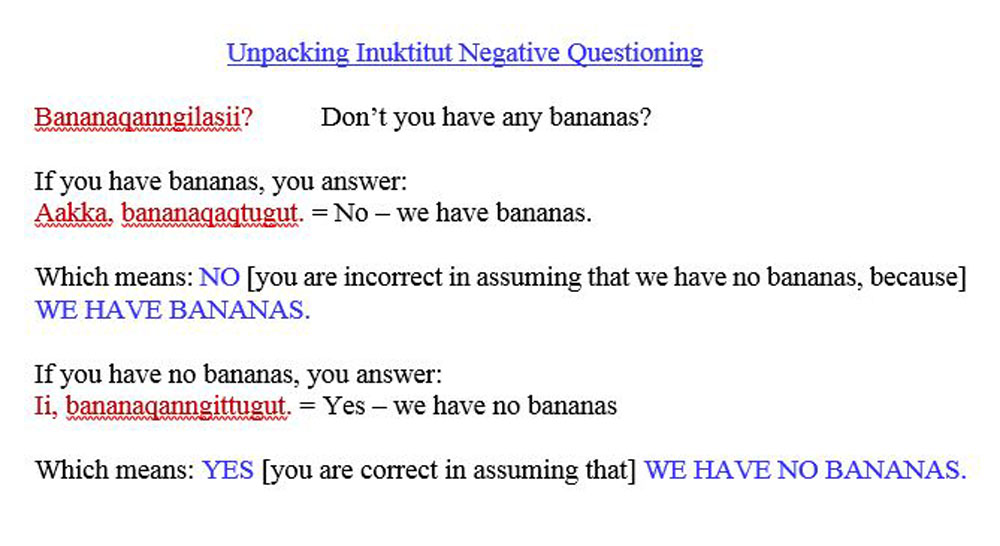 Here’s how negative questions are answered in Inuktitut.

But here is the difficulty in Inuktitut. The answers to these negatively-phrased questions are just the opposite of what they are in English.

The question: “Bananaqanngilasii?” (“Don’t you have any bananas?”)

The answer, if the grocer does have bananas in stock: “Aakka, bananaqaqtugut.” (“No, we have bananas.”)

The answer, if the grocer in fact, does not have any bananas in stock: “Ii, bananaqanngitugut.” (“Yes, we don’t have any bananas,” or alternatively, in the words of the song, “Yes, we have no bananas.”)

The Inuktitut answer and the answer given by our Greek grocer, in fact make perfect sense, and employ a very different logic than the standard English answer.

Let’s analyze them in translation.

Again, the question: “Don’t you have any bananas?” (The customer is assuming that the grocer has no bananas.)

In Inuktitut, the logic is exactly the same. This quaint song from the 1920s can be an unusual and effective way of teaching students of Inuktitut one of the finer points of the language, one which they will encounter early on in their efforts.