The first non-Inuk on the Moon 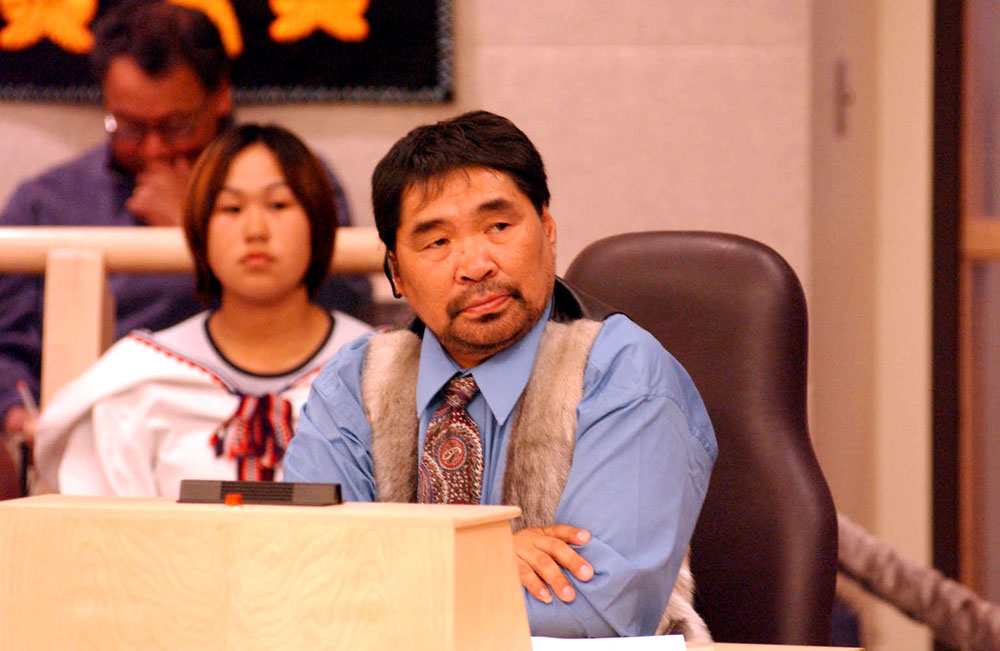 David Iqaqrialu, then the MLA for Uqqummiut, in May 2002. That was when he reminded his colleagues of that prior to Christianity, Inuit frequently visited the moon: “Inuit had reached the moon quite some time ago during the shamanistic ages, prior to the Americans reaching it with their machines and finding out it wasn’t what they thought it was,” Iqaqrialu said. (File photo)

I am happy to announce that I survived the onslaught of news in July spurred by the 50th anniversary of America’s moon-landing.

I’ve decided to celebrate that event in my own way, by dusting off and updating a column I wrote in 2012, when Neil Armstrong died.

In that year, the media was busy with news of Armstrong’s passing on Aug. 25, 2012. The announcement of his death eclipsed news of the other Armstrong in the news at the time, Lance, who was stripped of numerous medals for riding a bike at high speeds while on drugs.

Neil Armstrong achieved higher speeds, although not on a bike, and was heralded as the first man on the moon.

People in Nunavut knew, of course, that that was not true, and that the accolades extended to him were entirely unwarranted.

No, I am not a conspiracy theorist who believes that Armstrong’s moon landing was faked at some mysterious location in the Nevada desert. Armstrong reached the moon.

But the honour claimed for him was undeserved, because he was not first. All right-thinking Nunavummiut know this, because they know that Inuit regularly visited the moon for centuries.

David Iqaqrialu of Clyde River, then the MLA for Uqqummiut, said as much in a heated exchange in the Nunavut legislature on May 6, 2002. We know it was heated because he prefaced his remarks by telling the Speaker, “I am starting to get hot under the collar.”

He then went on to say, as reported in Hansard, “it is not really related to the question that I posed, but this is background material. Inuit had reached the moon quite some time ago during the shamanistic ages, prior to the Americans reaching it with their machines and finding out it wasn’t what they thought it was.”

In fact, Inuit pre-Christian beliefs held that shamans often travelled through the air to visit the spirit of the moon man, who was always willing to give men good hunting. Many Inuit continue to believe that shamans had this ability in the past.

But to return to Neil Armstrong and the buzz about the moon landing (That, by the way, is a media buzz and not a reference to Buzz Aldrin, a mere foot-note in history as the second American to step onto the moon.)

I remember Armstrong’s historic achievement well. I was on holidays in the south, having left Broughton Island the month before.

On that historic night, July 20, 1969, I was in Toronto, among the crowds watching the moon landing on the giant screen set up in Nathan Phillips Square. It was exciting to be there.

When I began teaching in Pangnirtung that fall, I was still impressed with what I had seen that summer evening. So one day, in teaching a science lesson, I told my Grade 5 class about the moon landing.

There was no television in Pangnirtung in those days, and my students had no prior knowledge of the event I described to them. I tried to convey my excitement about the “giant step for mankind” that Neil Armstrong had made by being the first man on the moon.

My students sat stony-faced. Obviously they didn’t believe what I was telling them.

Finally, I could contain my frustration no longer. I asked, “Don’t you realize how important this is?”

A bright-eyed student at the back of the room responded, “Billy Kakee has been to the moon.” (I can’t remember if the first name was actually Billy, but, if not, it was a similar name.)

“What?” I responded incredulously.

“Billy Kakee goes there all the time,” replied my student, while many of his classmates nodded vigorously in affirmation. “He can go there and back in one night,” he added. “Lots of other Inuit have been there too,” other students remarked.

There was no dissuading my students. They conceded that Neil Armstrong had probably been there—for let it be noted that my students were critical thinkers, and not conspiracy theorists. But Inuit had been there first.

There is no record of what the first Inuk said when he left his kamik-print on the moon. To my knowledge, there was no discussion of a claim to the moon in any of the Nunavut land claims negotiations—a serious oversight.

These events had, perhaps, faded from memory, until David Iqaqrialu reminded us of them in the legislature in 2002.