An Inuktitut vocabulary for the Franklin search 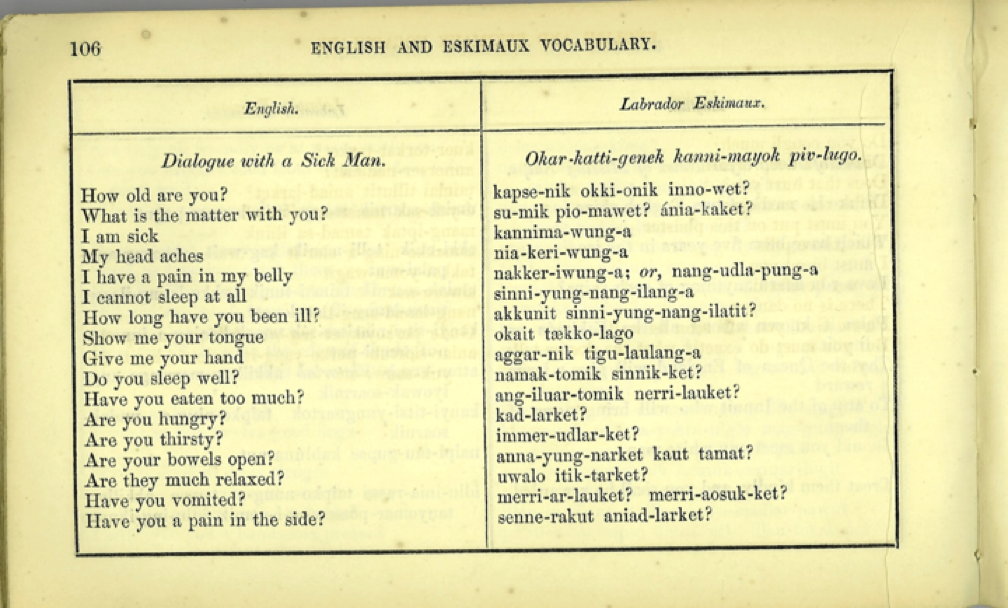 A page from an Inuit language “vocabulary” that was intended for the use of British naval officers involved in the search for Sir John Franklin. (Harper collection)

On May 30, 1850, the aging Arctic explorer, Sir John Ross, wrote a note to Capt. Charles Codrington Forsyth of the Royal Navy, who was about to depart for the Arctic on the Prince Albert on an expedition sponsored by Lady Franklin, in search of her missing husband, Sir John Franklin.

In his note, Ross said, “you are of course familiar with the Esquimaux vocabulary lately published which you will find of good assistance in your communications with any natives you may fall in with.”

In 1847 the British Admiralty began a search for the missing Franklin expedition. Many ships were involved and the searches continued for many years.

This little volume, 6 ½” x 4 ¼”, was bound in black leather, contained 160 pages, and was designed to fit in a hip pocket. It was compiled by John Washington, a captain in the Royal Navy, who was later hydrographer to the Navy and at one time secretary to the Royal Geographical Society.

The vocabulary, as the preface explained, was “drawn up in three parallel columns, consisting of the dialects as spoken by the Natives in Kotzebue Sound [Alaska], in Melville Peninsula, and on the coast of Labrador.”

Washington intended that every officer carry the volume and use it in their enquiries as to the fate of Franklin.

The actual vocabulary is followed by five “Specimens of Dialogues.” When one considers that the Inuit encountered by these expeditions had had little or no previous contact with white men, the dialogues come across as inept, humorous, and at times hilarious.

The officers were expected to explain to the Inuit they encountered that there was a reward for news of the missing ships.

Perhaps the most outlandish section was “Dialogue with a Sick Man.” It contained questions about headaches, bowel movements, vomiting and coughing. The most frightening statement may well be, “I must bleed you.” [takkai-yoma-wagit].

Sir John Ross took a copy of this volume to Greenland in 1850 and gave it to two Danes, an administrator and a missionary, who translated it into “the Eskimo dialect in use in Greenland, and in use also, it is believed, by the natives as far as the head of Baffin’s Bay.”

The result of their work was then published by the admiralty in 1852, entitled “Greenland-Eskimo Vocabulary, For the Use of the Arctic Expeditions.”

The two volumes were intended to be used together, as the preface says: “The present Vocabulary is supplemental to, and corresponds page for page with, the Labrador-Eskimo Vocabulary printed by the Admiralty, in January, 1850.… The reader is requested to refer to the introduction to the former Vocabulary, where also will be found a brief sketch of the Eskimo grammar.”

The admiralty apparently intended the work to be further revised, for they “earnestly requested that every one who has the opportunity will do his best to correct the Vocabulary, and that in doing so he will adopt the same system of orthography, and carefully adhere to it.”

And that summer, in fact, it was revised. John Washington began work on it with Qalaherhuaq, a “Polar Eskimo” from northwestern Greenland known popularly as Kalli, who had gone to England in 1851 on the return leg of a Franklin search expedition.

The revision was completed by Kalli, working with a minister and a professor of Sanskrit! The preface noted that “every word has now been revised from the lips of a native.” In 1853, that revision was published again, still in the small rectangular format of the original.

One can only wonder what use was actually made of this slim volume on any of the expeditions. References to it are sparse.

Captain Bernier found a copy in a cache left by Capt. Henry Kellett of the Resolute, on Dealy Island, where he wintered in 1852-3. Sir John Richardson refers to it under “Vocabularies” in his 1851 “Arctic Searching Expeditions,” but doesn’t say anything about using it.

Peter Sutherland, who participated in two Franklin searches, wrote in 1854 that, with the assistance of the “excellent vocabulary,” “we made ourselves tolerably well understood to them, but their replies were too hastily made, and far too voluminous to be comprehended.”

No information has survived as to how many copies of each edition were printed. Any edition is rare and valued in a polar library today.