The time has come, the walrus said 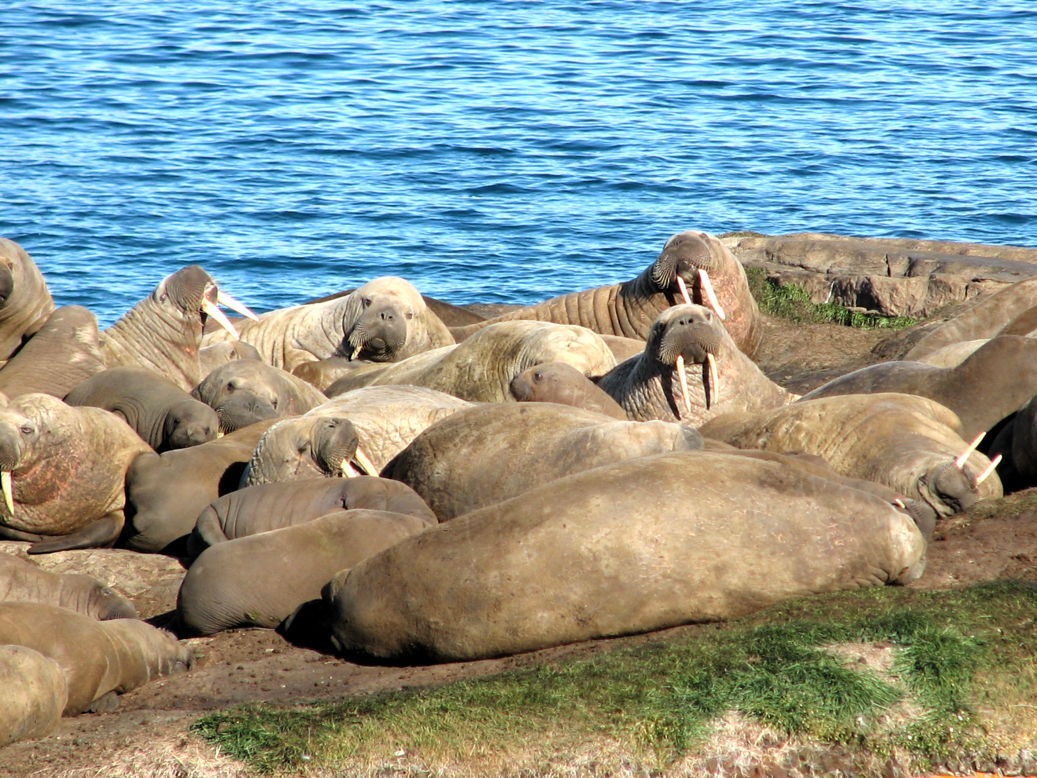 In their search for ivory, the medieval Norse who lived in Greenland may have over-exploited Greenland’s walrus herds, depleting the resource. (File photo)

The Norse, sometimes called Vikings, travelled west from Iceland to populate the lower west coast of Greenland a millenium ago, before Inuit of the Thule culture had moved southward along that same coast.

They lived—and for a time thrived—in its fiords for almost 500 years, and then disappeared. Scientists and laymen alike have speculated for centuries as to what exactly happened to them.

There are a number of theories. The climate changed and grew colder—and it is proven that it did—with the onset of the Little Ice Age. Or Inuit, who eventually encountered the Norse, warred with them and wiped them out—and it is likely that there were skirmishes in various locations over the years.

There were attacks by European pirates who killed some and carried others off into slavery. Or a depleted population packed up and moved west to North America; those who stayed behind in Greenland may have intermarried with the incoming Inuit.

An examination of the various theories indicates that no one theory satisfactorily accounts for the population loss, but that there is probably some truth in many of them. In other words, there was no one cause, but rather many causes.

Now there is a new theory that seems plausible as part of the solution to the mystery.

The medieval Norse farmed in the fiords, but they were also hunters who, over time, ventured far up the west coast of Greenland, eventually as far as the Thule district and across to Ellesmere Island.

They may even have hunted in the Pond Inlet area, and pushed into Hudson Strait. What were they after on these voyages?

The answer is walrus. For the Norse were also traders. They needed iron, timber, and other goods from Europe, and their currency was primarily walrus tusks.

The Norse were probably attracted to Greenland in the first place partly because of the presence of the Atlantic walrus. They had wiped out the species in Iceland, and needed new sources of supply. Greenland was such a source.

Confusingly, the Eastern Settlement was not on Greenland’s east coast, but rather in the fiords of far south-western Greenland. It got its name because it was technically east of the other settlement.

It appears that small numbers of walrus were hunted from near the Western Settlement. But the main hunting area was around Disko Bay and even farther north in the High Arctic, including Canada.

The Norse didn’t live that far north, but travelled to those hunting areas in the summers. In the High Arctic and Canada, they not only hunted, but likely traded with Inuit of the Thule culture and possibly also with the remnant Dorset Eskimo population (the Tuniit).

In summer, walrus are found in relatively shallow feeding areas, and they return every year to the same area. They are very vulnerable to attack by hunters when they “haul out” on land or pack ice.

Tusks were received in the trading centres of Dublin, Trondheim (Norway), and Schleswig (Germany), and later Bergen (Norway), and distributed from there to centres in Europe as far away as Kyiv (present-day Ukraine), to be carved as art objects. The Norse in Greenland received their much-needed imports in return.

Sophisticated DNA analysis of tusks found in European locations indicate that, as Norse occupation in Greenland continued, most of the tusks in Europe were from a population of walrus common in north Greenland.

Over time, too, the walrus taken were increasingly smaller females, indicating that the more desirable larger male walrus were becoming depleted in the easily accessible locations — Norse hunters were travelling farther afield to harvest their resource.

In the High Arctic, Norse artifacts have been found around the large High Arctic polynya between north-western Greenland and Ellesmere Island; this indicates trade with Inuit for walrus tusks that the Norse subsequently traded on to Greenland.

A recent study suggests, “It is plausible that the medieval Norse Greenlanders ultimately travelled to the northernmost limits of human habitation on Earth to secure sufficient animals to meet European demand. Inuit and Norse hunters may both have supplied the workshops of very distant artisans.”

But the Norse were not the only population wanting to trade ivory to Europe. Elephant ivory became more available for carving there by the thirteenth century. Logically, one would think that this would result in a decrease in demand for walrus ivory.

But the opposite occurred. Why? Because the value of walrus ivory—which was seen as less prestigious than elephant ivory—declined. Greenland still needed to trade walrus ivory for the trade goods it needed, and so it had to send more, not less, ivory to Europe in payment.

The result was that Norse hunters over-exploited the walrus populations, and then had to travel farther to find their prey. With a changing climate the northern voyages may have been unsustainable, the prey harder and harder to take.

This undermined the viability of the Western Settlement. No exports of Greenlandic tusks to Europe are known to have been made after 1327. The Western Settlement was abandoned in that same century. The Eastern Settlement, which had been an intermediary in the walrus trade, struggled on into the fifteenth century. Other factors probably also contributed to its demise.

The trade in tusks had flourished for over a century but ultimately dwindled. The walrus turned out to be a “boom and bust” resource, exploited intensely for a time, and then found to be no longer sustainable—like a modern-day mineral resource, or an oil deposit, or the bison that once roamed the North American prairie. The trade ended because of a change in demand, as is often the case with globalization, and resource depletion.

The end of the trade was fortunate for the walrus—its population rebounded—but disastrous for the Norse. It was one of the many factors which ultimately led to the end of the Norse colonies in Greenland. Concurrently, Inuit moved down the west coast to repopulate the country.