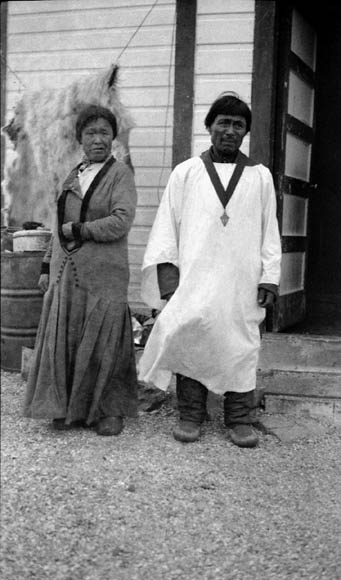 Qillaapik [Kidlapik], a catechist who helped to found the Anglican mission at Baker Lake, and later ministered at Southampton Island. (Photo from the Harper collection)

Fighting the Reds in Nunavut

When I was a boy growing up in a farming community in Ontario, my uncle had an abiding fear of communists. I don’t think he’d ever met one. But whenever the weather was too warm or too cold, or the spring too late in arriving, or too early, he could be heard blaming it all on the communists—though he pronounced it a little strangely, more like “commonists.”

There was no doubt about who he meant, however, because he would explain that “they’re experimenting with the weather over there in Moscow to try to ruin our crops here in North America.”

He was a staunch conservative (with both a small and a capital “c”) and, like many people in our decidedly conservative community, he liked to tell me that the federal party known as the CCF— the precursor to today’s New Democratic Party or NDP—was a communist front. Its full name was the Co-operative Commonwealth Federation, but local people insisted it really meant Canadian Communist Farmers. It did, after all, have its first electoral victory in left-leaning Saskatchewan!

These were the invisible communists of my youth, and their nickname was “the Reds” because of the colour of the Soviet flag.

In Nunavut, there was another kind of “Red.” Not communists, but—oh, no—Anglicans!

In 1910, Bishop Charlebois asked Father Arsène Turquetil to open a mission in Inuit country. Two years later Turquetil established the Oblate mission at Chesterfield Inlet. That location was chosen because it offered the best chance of bringing the word to Inuit both to the north and south, and also to those Inuit living inland. Chesterfield Inlet would be Turquetil’s home for many years.

At that time, there was no Anglican mission on the western shores of Hudson Bay north of Churchill. But that didn’t mean that the Catholics had the field all to themselves. In fact, it seemed like Anglican influence was everywhere. The Oblates knew that Anglican Bibles—though not missionaries—had already reached the Inuit of the northern Keewatin coast some years earlier, brought by whalers, and by the Inuit whom whalers sometimes relocated seasonally from Baffin Island to work for them.

The Inuit learned to read the syllabic orthography quickly and taught each other well in advance of the presence of missionaries. Thus, they were able to read the Anglican material when they acquired it, though understanding was sometimes a different matter. There were also phonograph records of the Rev. Edmund Peck, the venerable old founder of the Blacklead Island mission in Baffin Island, speaking in Inuktitut. Both books and records were distributed widely, but it was the prayer books that especially infuriated the Catholic priests. They called them the red books and the Anglicans themselves “the Reds.” (The books were actually a maroon colour, but the Catholics called them red—perhaps it made them “see red.”)

Father Armand Clabaut, who arrived in Naujaat in 1933, wrote:

“All the Eskimos here, except our Christians and a few others, have got hold of books, Bibles, and Anglican calendars. The propaganda the ministers make with their books is frightful; it comes from Pond Inlet, from King William Land, from Chesterfield. Take away their books, when they are open to talking with us. A few weeks, a few months later they manage to make a new collection available.”

The Hudson’s Bay Company opened many of their Arctic posts before missionaries arrived, causing some people to suggest that the initials HBC really means “Here Before Christ.” True to form, HBC had opened a post at Chesterfield a year before Turquetil arrived. As a result, supplies for the mission would be relatively easy to get. But the HBC presence was not a blessing for the Catholics because the traders were Protestant, and Ralph Parsons, who oversaw the activities of the company in the North, was staunchly so. To make matters worse, they sold Peck’s records in their posts, and many Inuit acquired gramophones.

Like all missionaries, Turquetil busied himself with Biblical translation work and, like the Anglicans, he used Moravian texts as models to help him in this task. He mimeographed a booklet of hymns in syllabics in February 1915, and in 1917 he left aboard the Nascopie for Montreal for a year, where he would have the first catechism books printed. 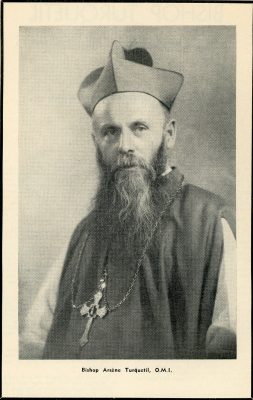 Father Turquetil, who founded the Oblate mission at Chesterfield. (Photo from the Harper collection)

When the Oblates produced their first material in Inuktitut syllabics, the script bore a decidedly different look than that of the Anglican Bibles and prayer books. That is because Turquetil used the syllabic lettering that he had been familiar with at a previous mission in Brochet, Manitoba, that was used in reading materials for the Chipewyan Indigenous people. It had a much more square and boxy appearance than the Anglican symbols and was quite distinctive. There was no confusing Anglican and Catholic syllabics.

Anglicans and Catholics both opened missions in the same year in three communities: Salliq (Southampton Island) in 1926, Baker Lake in 1927 and Pond Inlet in 1929. In Southampton Island, Luke Qillaapik [Kidlapik] arrived with the white Anglican missionary, while in Baker Lake, Joseph Pudlo did so. Both these men were experienced catechists from Baffin Island, Qillaapik from Blacklead Island in Cumberland Sound, and Pudlo from Lake Harbour (now Kimmirut).

Rev. Smyth, who opened Baker Lake with Pudlo, had an intense rivalry with Father Rio. Although they arrived in the same year, Pudlo got the jump on the Catholic priest by immediately writing down the names of all the families he met, and then targeting them for cursory instruction and baptism. The Catholics felt that the Anglicans baptized first and taught later, whereas they, the Catholics, insisted that candidates must be properly taught over a period of time and made ready to join the church.

Indeed, the Roman Catholic priests often wrote about the threat from “pagans,” but the pagans they were referring to were not Inuit shamans but, rather, Anglican ministers and catechists, whom they referred to as tammaqsaijit, meaning “those who teach errors,” or, loosely, “ministers of error.”

There was no spirit of ecumenicism in the Arctic at the time. In addition to the tammaqsaijit epithet, the Roman Catholics continued to call the Anglicans the “Reds” after the colour of their prayer book. The Reds were the enemy. If a follower of the Anglicans wished to convert to Catholicism, he was required to turn over his prayer book to the priest, who then had to keep it or burn it. One of the purposes of the first synod of the Hudson Bay Vicariate, held at Chesterfield Inlet in 1937, was “to close the ranks so that a more united front could be made against the Anglicans.” It was then that the decision was taken to confiscate the Anglican prayer books.

Some of the enmity is seen in a passage Father Henry wrote in 1948: “Five of our catechumens have lapsed and returned to the Reds…. All these defections are the result of Protestant pressure.”

Anglican bishop Donald Marsh was so vociferous in his objection to Catholicism in the 1950s and 1960s that he refused to even shake hands with a Catholic priest. In Pond Inlet, where the clergy of both faiths also arrived in the same year, it is said that the Anglican ministers and the Catholic priests did not speak to each other for two years. Inuit were certainly perplexed by this behaviour from people who professed to believe in the same God.

Today a more collegial atmosphere prevails. With the failure of the Soviet Union, the threat of the “Reds” has subsided on the world stage. Similarly, Anglicans are no longer referred to as “the Reds” in Nunavut.