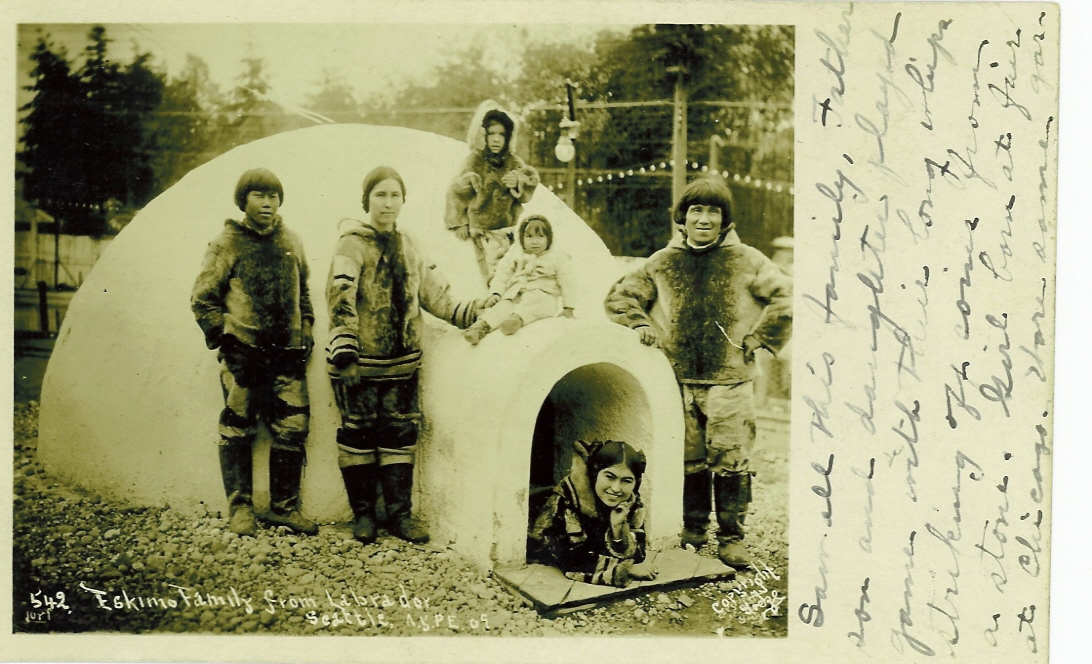 Zacharias Zad is standing on the far left next to Esther Enutseak in this postcard of the Labrador Inuit group at the Seattle World’s Fair in 1909. (Harper collection)

In late 1918, the Spanish flu epidemic swept the world. In the devastation that it wrought, two Labrador communities were hit hard: Okak and Hebron lost over 300 people between them.

Among those who died was a man who had led a life more adventurous than most of his fellow Inuit. Of all the Inuit in the small community, he was the most well-travelled and most photographed.

Thirty-four years earlier, much farther south in the small community of Zoar, a son was born to an Inuit couple, Seth and Sarah. They named him Zacharias when he greeted the world on March 26, 1884. In keeping with the custom of the Moravian church, when he grew up, Zacharias took a variant of his father’s Christian name, Set, as his surname. The outside world would know him as Zacharias Zad.

While still a teenager, Zacharias left Labrador with his mother and stepfather, and a few other Inuit, to join the “Eskimo Village” at the Pan-American Exposition in Buffalo, New York. About 30 Inuit were already there, having arrived after a lengthy European tour. 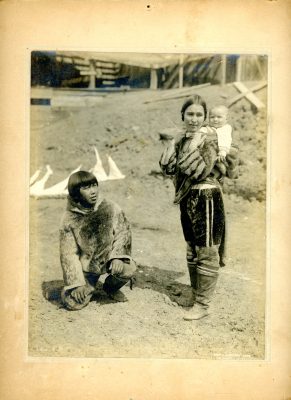 Zacharias Zad was photographed with Esther Enutseak and her son Norman at the St. Louis World’s Fair in 1904. (Harper collection)

Zacharias Zad became a professional exhibit. When the Buffalo fair was over, he worked in fairs, carnivals and ethnographic exhibitions throughout the United States, always travelling with Esther Eneutseak, who was also from Zoar, as well as her daughter, who was the much more celebrated Nancy Columbia, and other Inuit. The group even appeared at the famous Coney Island amusement park.

By about 1909, ethnic exhibitions began to decline in popularity. But at the same time the film business was evolving. Films at the time were silent, single reel, and only about 10 minutes in length. Still, they were popular—in 1910, between 15 and 20 films were released per week—and a number of companies vied for prominence in making them. One of those enterprises was the Selig Polyscope Company, based in Chicago. In 1910 Tom Mix, who would go on to earn fame and fortune as a movie cowboy, was working for Selig, and he recruited the Labrador Inuit to go to Jacksonville, Florida, to make “Jungle” and “Indian” films. Bizarrely, Mix declined to hire any of the local Seminole people, reasoning that they didn’t look like “picture Indians”—the stereotype of an “Indian” in the American mind at the time was a more western Plains Indian. The Inuit apparently looked more like “picture Indians” and so they were given “Indian” roles to play. 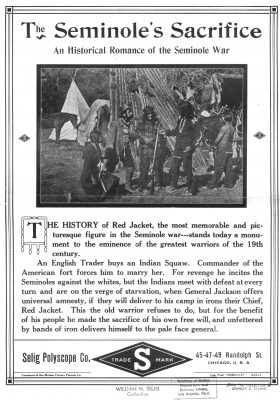 The release flyer for “The Seminole’s Sacrifice.” Zacharias Zad played a Seminole in the movie, which was filmed in Jacksonville, Florida, and released in 1911. (Harper collection)

Their roles were not starring roles. Nonetheless, Zacharias Zad appeared as a Seminole extra in at least two of the Florida movies. He is instantly recognizable through his distinctive “bowl” haircut.

“The Seminole’s Sacrifice” was the first to be released, in February of 1911. Zacharias even appears in the release flyer and in production stills. His next film was “The Witch of the Everglades,” released in April of the same year. Most early silent films have not survived. Remarkably, both of Zad’s have.

From Florida, the Inuit travelled to Michigan where they filmed two “Eskimo” movies in 1911. Nancy Columbia herself wrote the script for “The Way of the Eskimo,” making her the world’s first Inuit screenwriter. Zacharias appeared in that film, and in another film made at the same time, “Lost in the Arctic.” These were dramatic productions. In those days, there were no disclaimers telling the audience that no animals were harmed in the making of a film. In fact, Bruno, a real polar bear brought from a Chicago zoo for the filming, was deliberately killed when Simon Aputik, another of the Labrador Inuit, speared it through the heart.

Unfortunately, neither “Eskimo” film has survived. But documentary evidence exists in the form of stills, release flyers and photographs kept by Nancy Columbia’s daughter and given to this writer. The continuity script for “The Way of the Eskimo,” developed from Nancy’s treatment, has also survived. Both movies were widely distributed and extensively reviewed in publications as far away as Australia and New Zealand.

In “The Way of the Eskimo,” Zacharias Zad plays the role of an Inuk named “Zak.” He is the lover of “Ananak, an Eskimo Maiden,” played by Nancy. After almost losing her to a white trapper, whose life Zak has saved, Zak is reunited with her. Presumably—because this is a movie—they live happily ever after. In “Lost in the Arctic,” Zacharias plays an unnamed “Bear Hunter.” The films were released in July and September of 1911.

Later in the fall of that year, John Smith, the Inuit group’s promoter and husband of Esther, took all the Inuit to Germany for an exhibition, and Zacharias’s film career was at an end.

When Esther and her immediate family returned from Europe to the United States in 1912, Smith abandoned Zacharias and Simon Aputik in Belgium. They found employment in a manufacturing plant where cardboard boxes were made. The following year, homesick and destitute, they petitioned the British government for assistance—Labrador was still part of Britain then—and were repatriated to Labrador.

An enlarged image of Zacharias Zad from the release flyer for the movie “The Seminole’s Sacrifice.” (Harper collection)

In Labrador, Zad moved north. When he was 32 years of age, he found a bride, Ernestine Eins, 12 years his junior. They married in Hebron on April 30, 1916. He usually appears in the church records of the time as Zacharias Set, although on his marriage registration both surnames appear. On Dec. 18 of the following year, in Tikkerarsuk near the Hebron mission, the couple had a son, whom they named Henoch (a variant of Enok).

One wonders what the Inuit of northern Labrador knew of Zacharias’s adventures. Did he pass the winter evenings telling them tales of his filmmaking experiences in the United States? What did he tell them about life as a carnival attraction, with people always watching him and paying to see him snap an Inuit dog whip? Did he tell them anything at all? Or did he keep these memories to himself? One will never know. 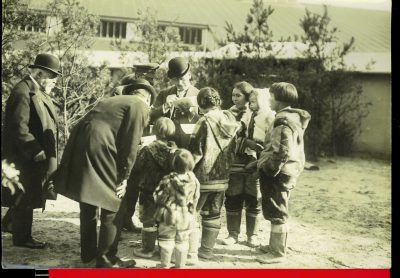 Zacharias Zad is on the far right of the Inuit group that appeared in an exhibition in Germany in 1911. (Harper collection)

In 1918 the little family was living in or near Hebron when the flu arrived, killing most of the community. Both Zacharias and his son died in November, the boy not quite a year old. Zacharias’s widow, Ernestine, survived. Life could be cruel to a widow on the harsh Labrador coast, and so she remarried only two months later, to Josua Jack, on Jan. 28, 1919, in Hebron.

Zacharias Zad is forgotten in Labrador. His image survives in two silent films and countless still photographs, a stocky young man, strong of build, serious in expression. His was a life unlike that of any other victim of the Spanish flu in Labrador.

A version of this article appeared in 2018 in the Labrador magazine Them Days.