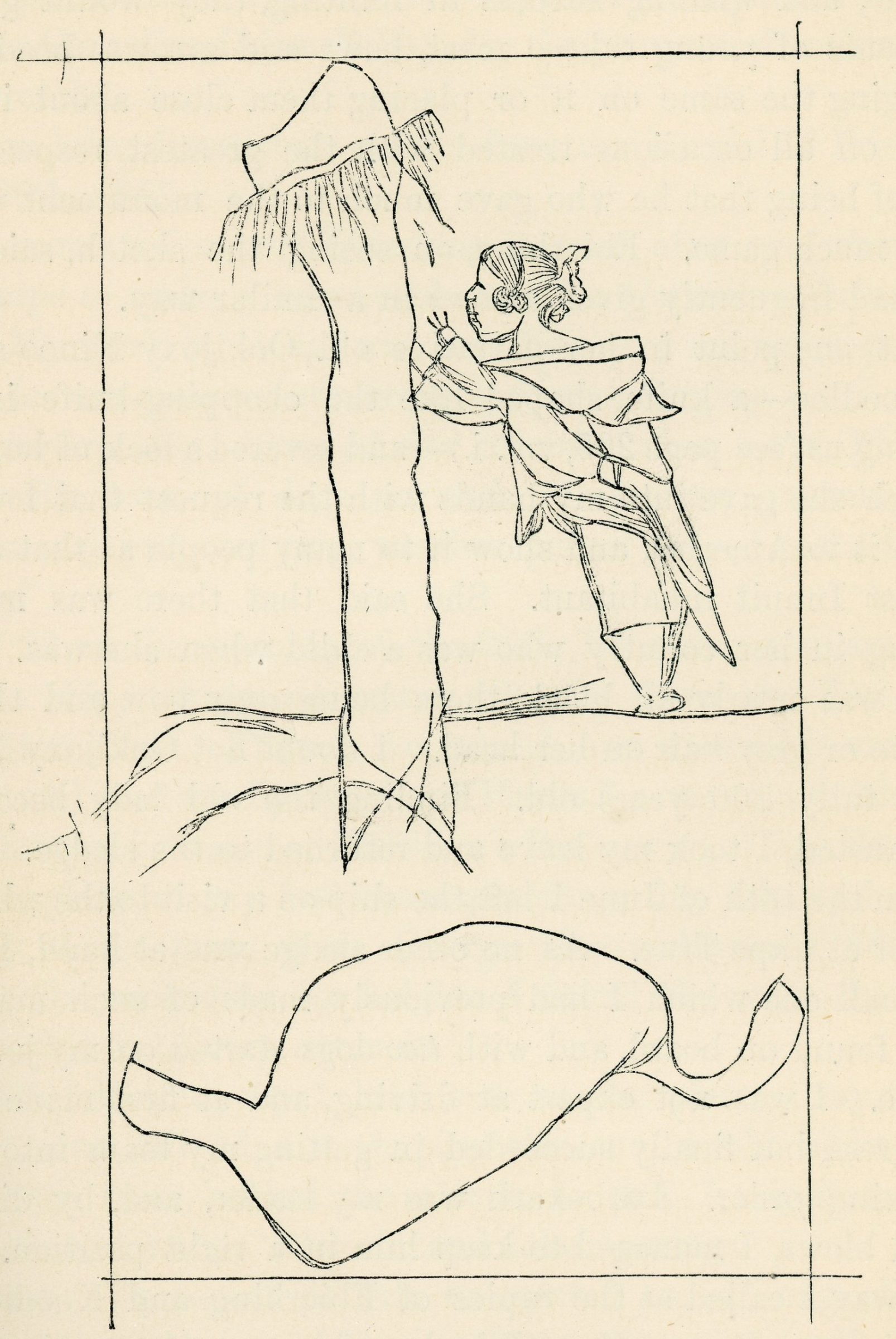 A sketch by Uqijjuaqsi Nanuq, showing herself performing “devotions” at an ancient monument erected by Qallunaat (white men) on the shores of Frobisher Bay. The lines around the top of the monument are strings to which the Inuit hung offerings to secure good luck in hunting. (Charles Francis Hall. Life with the Esquimaux, Volume II. London: Sampson, Low, Son, and Marston, 1864, page 285.)

In the last column, I wrote about five sailors from Martin Frobisher’s ship, Gabriel, who went ashore at Frobisher Bay on Aug. 20, 1576, and were never seen again by Qallunaat.

The British assumed that they had been captured, held against their will and probably murdered. But over two centuries later, Inuit oral history told a different tale.

What happened to these five white men four centuries ago?

In 1577, Frobisher returned to the mouth of the bay that bears his name in southeastern Baffin Island, this time with three ships. He was, once again, searching for the Northwest Passage, but he also hoped to mine gold. He was, of course, most curious about the fate of his five men, and held out hope that they were still alive.

On this expedition, relations with the Inuit were no better than the previous year. There were battles, and a number of Inuit were killed. In one skirmish, Frobisher himself was famously shot in the buttock with an arrow.

Just as on the previous expedition, Frobisher took one of the “countrie people,” a man, as a captive. He showed him pictures of the Inuk man taken captive to England the previous year. The man was astonished. Thinking the depiction was a living, though miniaturized, human being, he spoke to it and was disappointed when he received no response. The Inuk “with great noise and cries, ceased not wondering, thinking that we could make men live or die at our pleasure.”

With his captive in tow, Frobisher landed on Countess of Warwick Island (now called Kodlunarn Island, meaning White Man’s Island), determined to learn the fate of his men. His miners, meanwhile, began excavating there.

At one point, the captive arranged five sticks in a circle with a small bone in the middle. The Englishmen at first thought this was “some charm or witchcraft,” but they finally concluded that it was meant as a sign to his fellow Inuit that he, represented by the bone, had been taken prisoner as retribution for the five men the Inuit had presumably seized the previous year.

Captain Yorke of the vessel Michael found Qallunaat clothing—“sundry articles of the apparel”—and mismatched shoes in a tent on the southwestern shore of the sound. Thinking that the five men might still be alive, he left a note; in the parlance of the time, he “left his mind behind him in writing, with pen, ink, and paper also, whereby our poor captive countrymen … might know their friends’ minds … and likewise return their answer.” 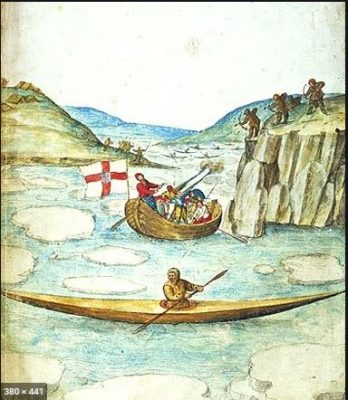 The battle at Bloody Point on the southwestern shores of Frobisher Bay, 1577, from a drawing by John White.

By signs, one group of Inuit communicated that three of the men were still alive, and that Frobisher should send a letter to them—some of them had seen Frobisher and his men writing in journals and logs aboard ship and had concluded that this was some means of communication. Frobisher wrote a letter and sent writing supplies with the Inuit, so that the captive men might reply. But no answer was ever received. In his letter, Frobisher assured his missing men “that if they deliver you not, I will not leave a man alive in their country.”

Frobisher’s efforts to find his missing men—indeed, even to learn if they were dead or alive—were in vain. Relations with the Inuit deteriorated. A vicious battle took place at a locale afterwards called Bloody Point, where a number of Inuit were killed and a woman and her child taken prisoner. When Frobisher left for England, it was with three captives, a man whose name has been recorded as Calichoe or Callichogh; a woman called Egnoge or Ignorth, which was simply a sailor’s attempt to say “Arnaq” (woman); and a child, Nutioc, probably “Nutaraq” (child). 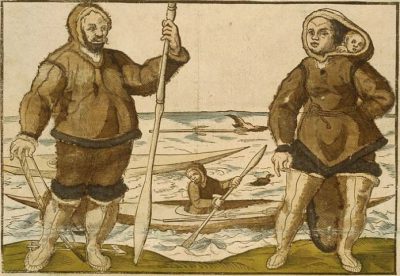 In 1860, Charles Francis Hall, a printer and journalist from Cincinnati, arrived in Cyrus Field Bay aboard a whaling ship. From that unlikely starting point, he hoped to reach King William Island to search for survivors of the lost Franklin expedition.

Instead, he uncovered the story of Frobisher’s three expeditions to the area, preserved for almost 300 years in the memories of Inuit.

In 1861, Hall met the oldest woman in the area, Uqijjuaqsi Nanuq. (He spelled her name Ookijoxy Ninoo.) From her he learned that “five white men were captured by Innuit people at the time of the appearance of the ships a great many years ago; that these men wintered on shore (whether one, two, three, or more winters, could not say); that they lived among the Innuits; that they afterward built an oomien (large boat), and put a mast into her, and had sails; that early in the season … they endeavoured to depart; that, in the effort, some froze their hands; but that finally they succeeded in getting into open water, and away they went, which was the last seen or heard of them.”

Through an interpreter, Tookoolito, the old woman later added details, some slightly contradictory, to her account.

The white men apparently got along well with the Inuit, and especially with one man, whose name was “Eloudjuarng.” He was, Hall wrote, “a great man or chief among the Inuit. Tookoolito described him as being ‘All same as king.’” When the white men were about to set out for home, Eloudjuarng composed a song wishing them a quick and safe passage, “and he caused his people … to sing it.” But the white men failed in their attempt to flee the country, and, in this version of the story, “finally froze to death.”

On Kodlunarn Island, Hall discovered a “ship’s trench.” The Inuit told him that this was where the “small ship” was constructed. They said that the Qallunaat took the boat to nearby Tikkoon Point where they installed a mast at the bluff called Nepouetiesupbing—a place “to set up a mast.” Finding the ship’s trench seemed to verify the story told by Uqijjuaqsi about the events of so long ago.

That would seem to solve the mystery of what happened to the five missing men. But does it?

Indeed, the story has some rather large holes in it.

Why would the five missing men have spent the winter of 1576—77 on Kodlunarn Island—an island that Frobisher had not “discovered” in 1576?

If they had, why did Frobisher not find any trace of them there when he did explore the island in 1577?

Why did Frobisher not report a “ship’s trench” on the island in 1577?

What materials would the five missing men have used to build a boat there? The voyage of 1576 had left no spare materials anywhere in the vicinity.

For answers to these questions, we must look at the events of the following year.

Frobisher made a third voyage to the same area in 1578. Uqijjuaqsi told Hall that he came with “am-a-su-ad-lo oo-moo-arch-chu-a”—“a great many ships.” Indeed, he had arrived with a fleet of 15 vessels. Before the conclusion of that season’s activities, he constructed a stone house on Kodlunarn Island and stashed lumber, iron and other goods there, anticipating that he would return yet again the following year.

Arctic archaeologist William Fitzhugh has noted that the ships departed the area that year in chaos during a fierce storm. A number of the ships’ boats and men were lost. A pinnace, or ship’s boat, sent from the Gabriel to catch up with the Moone probably did not reach the latter ship. It may have survived the storm and returned to the house on Kodlunarn Island. There its crew, which would have numbered considerably more than five, may have excavated what became known as the “ship’s trench,” or modified one of Frobisher’s “mines” into such a trench.

They may have had the time and the skills to use the materials left on the island to build themselves a boat, install a mast and attempt to sail home. Living peacefully among the Inuit, they may not even have started construction during the first year, until they realized that no more ships were coming to Frobisher Bay.

But what of Uqijjuaqsi’s tale? It was a remarkable story, well preserved for nine generations, by Hall’s reckoning. Her two tellings of it are not without inconsistencies. But oral histories, especially recollections of events that happened a very long time ago, often suffer from conflation, defined by archaeologist Susan Rowley as “the collation of two events, sometimes separated in time, into one.” This is probably what happened with the oral histories recounted by Uqijjuaqsi. In this scenario, the refugees from the Gabriel’s pinnace lost in 1578 were eventually replaced in memory by the five originally missing men. That’s why Frobisher found no trace of those first men on Kodlunarn Island in 1577.

Robert McGhee, an Arctic archaeologist and historian, felt that the Inuit may well have wanted to steal the ship’s boat in 1576, wood being a very valuable commodity, but that they would have no other reason to hold the men hostage. Moreover, he suggests that the Englishmen may have acted voluntarily. He speculated: “An invitation to come ashore and further their acquaintance, as well as to walk freely on the dry tundra and drink clean water from a stream, may have been too enticing to resist.” According to this scenario, they may have deserted. Their long-term fate, McGhee wrote, “would have been entirely dependent on the nature of the camp leader.”

There is a strange footnote to this story. In 1862 Hall learned of an unusual monument said to have been erected by the Qallunaat from Frobisher’s ships in Newton’s Fiord and revered by Inuit. Uqijjuaqsi is once again the source of the story: “The monument itself is not on very high land. The Innuits for a very long time, and down even to the present day, have been in the habit of going there; and wishing success in hunting, they would give it presents of young tuktoo [caribou] meat, bows and arrows, beads, &c. hanging the same on it or placing them close about it. It was on all occasions treated with great respect, the belief being that he who gave much to the monument would kill much game.” The old lady concluded: “This stone marker of Kod-lu-nars great help to Innuits—Always makes tuktoo plenty there. Every Inuit knows all about this.” In the old lady’s sketch of herself “performing her devotions” to the monument, it does not appear to be a traditional cairn. Was this strange monument erected by the ship’s crew, or later by the five missing men or the pinnace crew?