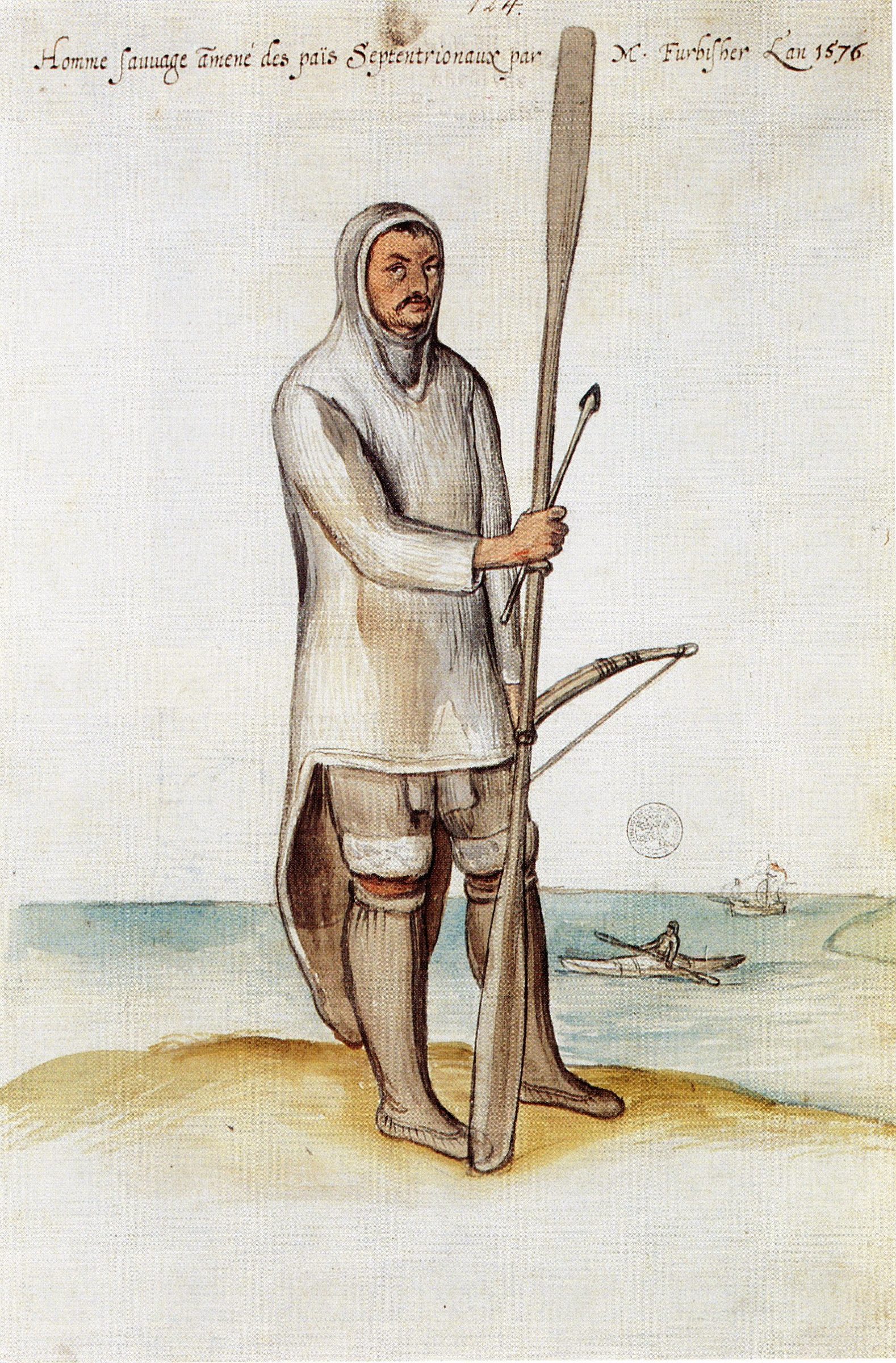 A watercolour of Frobisher’s Inuk captive by Lucas de Heere (1534-1584), who was from Ghent, Belgium, but worked in London. The exact date of the painting is unknown. It is also not known whether he painted the man from life, or from the work (now lost) of another Flemish painter, Cornelis Ketel, who is known to have painted the man. (Source unknown)

The white man had never seen a kayak before. From an island in a large bay on the southeastern shores of Baffin Island, he surveyed the body of water that stretched out in front of him. This must surely be a passage to the west, he thought, a northwest passage.

Then he spotted objects in the water at a distance. An account written at the time explained, “And being ashore, upon the toppe of a hill, he perceived a number of small things fleeting in the Sea a farre off, whyche he supposed to be Porposes or Ceales, or some kinde of strange fishe: but coming nearer, he discovered them to be men, in small boates made of leather.”

The year was 1576. The man was Martin Frobisher, a seaman and adventurer from England sent out by the Muscovy Company to find a passage through or around the North American continent to the riches of Asia.

When the men in small boats–Inuit–were seen, Frobisher and his captain, Christopher Hall, returned quickly to their ship, the Gabriel. They had no way of knowing whether the strangers would be friend or foe. Nor did they know what race of people they were. The word “Eskimo” doesn’t appear in contemporary accounts of Frobisher’s voyages; it didn’t come into use until the 1600s. 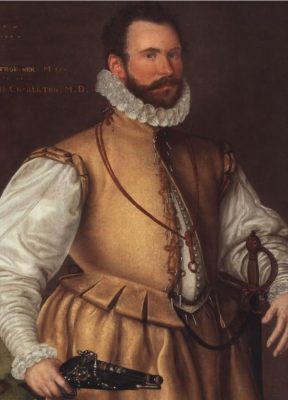 Portrait of Martin Frobisher. It is held in the Bodleian Library, University of Oxford. (File photo)

To add to Frobisher’s unease, the English thought the Inuit were cannibals; George Best, who travelled on Frobisher’s second Arctic voyage, wrote “our flesh is so sweet meate for them, that they will hardly part from so good morsels.”

Christopher Hall was the first to make actual contact with the Inuit. He went ashore in the Gabriel’s boat, a white flag waving to show his peaceful intent. Through signs, he invited an Inuk to accompany him back to the ship, and left a member of his crew ashore as a hostage, to show his good faith.

At that point, in fact, each side had a hostage. The Englishmen fed the Inuk aboard ship–he found the food distasteful–and gave him wine; when the man returned to shore he told his fellows that he had been well-treated. The English hostage returned to the ship. This first contact had been peaceful.

A large group of Inuit then approached the ship and boarded. They traded sealskin garments and raw meat and fish for English bells, looking glasses and other baubles.

They showed no fear of the Qallunaat. In fact, the Englishmen, who knew that no other voyages to this northern land had been documented, nonetheless felt that the Inuit had seen white men before and were accustomed to trade.

Dionysius Settle wrote, “It seemeth they have bene used to this trade, or traffique, with some other people adjoining, or not farre distant from their Countrey.” Who might these unknown traders have been? The record is silent.

Frobisher himself went ashore to the Inuit settlement. One man returned to the ship with him, apparently having agreed–or so the Englishmen thought–to guide the ship through the “strait” to the west.

But there was likely a misunderstanding of the arrangement on both sides. In this first encounter, no party on either side had any idea of the language spoken by the other. Again, it is to Christopher Hall that we must turn for reports of the encounters, as Frobisher himself could not write; Hall noted of the Inuit, “They spake, but we understood them not.”

Five of Frobisher’s men took the Inuk ashore in the ship’s boats to get his kayak. But instead of putting him on land in sight of the ship, they rowed around a headland where three of the Qallunaat went ashore with him. The boat, with two men in it, reappeared and Frobisher made signs that they should return to the ship.

But the boat disappeared again behind the headland, presumably to pick up the other men. The five men were never seen by Englishmen again.

Frobisher was distraught. He could ill afford to lose five men–leaving him with only thirteen–and the ship’s boat. Nor was he pleased about the loss of the guide he thought he had hired.

He waited at anchor for the night, then proceeded farther up the bay in the hope of finding other local people who had no knowledge of what had transpired, so that he could seize some of them and hold them hostage for his missing men. But he encountered no more Inuit, and returned a few days later to the site of his men’s disappearance.

Then a number of men in kayaks appeared. Frobisher prepared for a skirmish. But, instead, the man who had been the first to board the ship some days earlier approached the vessel in a cautious but friendly manner, no doubt hoping to trade.

Frobisher lured him close to the ship with a bell, which he dropped into the sea when the man reached for it. Then Frobisher lured him closer, by ringing a larger bell over the side of the ship. As the Inuk reached for the bell, Frobisher seized the man’s hand, then grasped his wrist with his other hand, and lifted the man and his kayak out of the water and onto the deck of the ship in one smooth motion. A chronicler of Frobisher’s voyage wrote that the unfortunate man “whereupon when he found himself in captivity… he bit his tongue in twain within his mouth.”

Frobisher held the man for two days, still hoping to exchange him for his five missing men and his much-needed boat. But the Inuit who came near the ship in their kayaks did not offer up the five men. Reconciling himself to his losses, and unable to repair his strained relationship with the Inuit, Frobisher gave up his mission. On Aug. 25, with the unfortunate Inuk still on board, he set sail for England.

The hostage was now a captive and could at least be used to prove to Queen Elizabeth I that Frobisher had reached a far-off land.

They reached London on Oct. 9, where the Inuk, whose name was never recorded, became the talk of the town. George Best described him as “this strange infidel, whose like was never seen, read, nor heard of before, and whose language was neither known nor understood of any.”

Michael Lok, Frobisher’s principal financial backer, said he was “a wonder unto the whole city,” and describe his countenance as “sullen or churlish and sharp withal.”

Misunderstandings resulting from language differences remained a problem. In England, the Inuit captive told John Dee, the court astronomer and adviser to Queen Elizabeth I, that his land was called Pyckenay. As the later explorer Vilhjalmur Stefansson pointed out, “When asked where something is, Eskimos may well reply, pikani, which, while it literally means ‘up there,’ is understood to mean ‘up on the high land.’ This the English might well mistake for the name of a district.”

Similarly, the Inuk told Dee that he had been willing to guide Frobisher to “Mania”; Dee took this to mean the mythical Straits of Anian, a part of the equally mythical Northwest Passage. Stefansson points out that when the man was being questioned, there was likely a map before him “and that the Eskimo, putting his finger on a district farther west than Frobisher Bay, used the expression mani [maani], meaning ‘here.’”

Unfortunately, the captive did not survive long. He died in London and was buried in the Church of St. Olave, a church that still stands near the Tower of London. The church records, however, do not record his burial and so he remains nameless, the first recorded casualty in a clash of cultures in the Canadian Arctic.