Joseph Bernier — The Rest of the Story 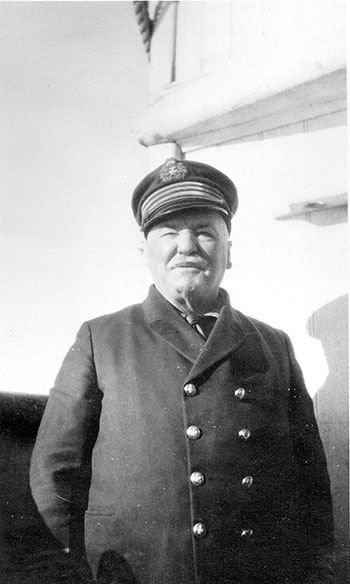 Joseph Bernier as an old man.

In 1910 Joseph Bernier was ordered north again, to patrol the waters of the Arctic archipelago, issue whaling licences to foreign whalers, and act as justice of the peace and protector of wildlife in the region.

Ice prevented his ship, the Arctic, from getting through McClure Strait. Disappointed in failing to complete the Northwest Passage, he returned eastward and wintered at Arctic Bay. (The bay, however, was named for another Arctic, a whaler captained by William Adams from Scotland, almost four decades earlier.)

Bernier’s return south in the fall of 1911 coincided with a change in government in Ottawa. The new government had a different approach to northern development – some might say no approach at all — and would no longer send ceremonial, flag-waving expeditions to the Arctic.

For the next decade, the far north was neglected by officialdom, virtually forgotten by all except private traders, until the initiation of the Eastern Arctic Patrol in 1922.

Coincidentally, this fit well with Bernier’s plans, for he had decided that his future and perhaps his fortune lay in becoming a private trader in the High Arctic.

In 1910, he had purchased land and buildings at Pond Inlet and Bylot Island from Scottish whaling interests. The government also granted him a nearby tract of land 960 acres in area. Modestly, he named it Berniera.

The crew of six French Canadians, two Englishmen and one New Zealander wintered on shore in wooden shacks and later in snow houses with the Inuit. The expedition returned south the following year with cargo valued at $25,000. In 1914 Bernier returned to winter again in northern Baffin Island with a new ship, the Guide. Four years later, he sold his holdings to a rival trading company, the Arctic Gold Exploration Syndicate. Bernier retired.

In 1922 the Department of the Interior brought the old man, then 70 years of age, out of retirement to captain his old vessel, the Arctic, once more, this time on an expedition sent north to establish Royal Canadian Mounted Police posts.

The expedition itself, commanded by John Davidson Craig, was the first of an annual series of voyages known as the Eastern Arctic Patrol. The next year, Bernier commanded his old ship again on a voyage to Pond Inlet for the trial of three Inuit accused in the murder of the trader, Robert Janes. He captained the Arctic again for the next two summers.

Joseph Bernier was a remarkable man. At an age when most men enjoy retirement, he had once again taken on the challenge of turning a reluctant nation’s eyes northward.

Not content with a mere intellectual challenge, he had led by example, personally accepting the isolation and hardship of the polar regions. Physically, he was a powerhouse, accustomed to giving orders and having them obeyed. A ship-mate on a later expedition left a verbal portrait of the captain in his old age:

“Bernier was below medium height but massive, with a bull neck and muscular arms and shoulders. Though overweight, he was nimble and sturdy… His head was bald on top, fringed by white hair, and he had a matching walrus moustache. His mouth was large and contained an array of gold bridgework. His nose was bulbous, his chin was heavy and his face was broad and florid. His eyes were keen.”

In the fall of 1925, after a short assignment with the Department of Railways and Canals, Joseph Bernier retired for the last time. He died in Lévis, Quebec on Dec. 26, 1934.

Bernier broke new ground in attempting to turn northward the imagination and vision of the Canadian public and its political leaders, and he did so with flair and skill. He reminded any and all audiences that he was a French-Canadian loyal to Canada and the King.

His success in carrying out the demanding orders given him each year by the Department of Marine and Fisheries was due to his extraordinary ability to organize, and his methodical approach to planning. His two earliest dreams of the Arctic, to reach the North Pole and to traverse the Northwest Passage, were never to be realized, yet fueling both those dreams was the desire to establish and to extend Canada’s sovereignty over the far north, and in this he succeeded.

Bernier’s real accomplishment was not in discovering new lands, but in securing Canada’s claim to lands that other expeditions, mostly British, had already discovered and cursorily explored. He charted in more detail, described with more accuracy, and explored with more tenacity, areas that had been found by others. In doing so he proclaimed Canada’s sovereignty in the Arctic.

The Inuit knew him – and remember him to this day – as “Kapitaikallak” – the stocky captain.