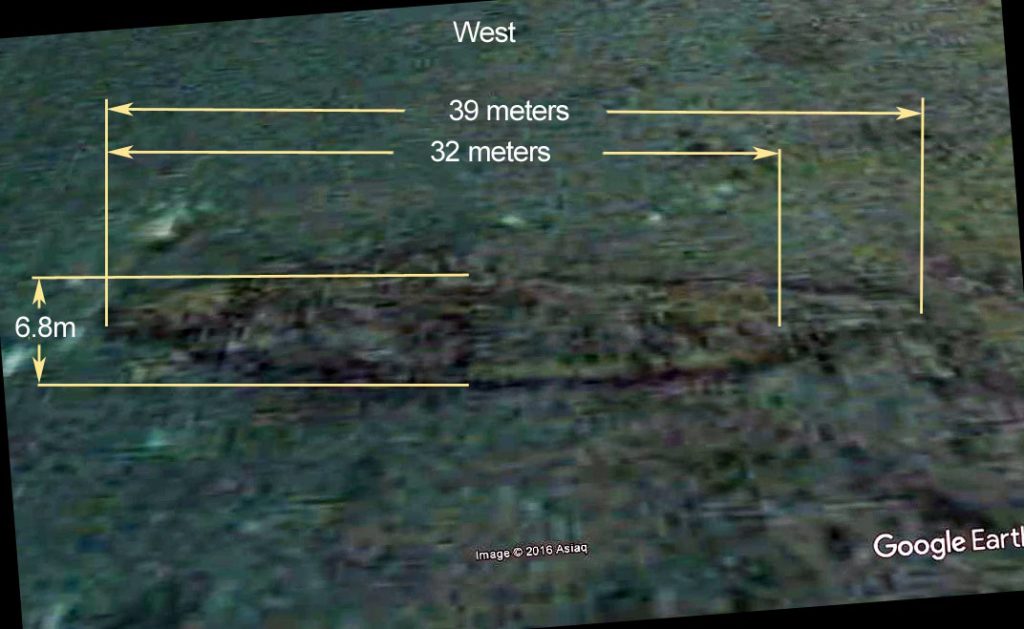 The whale ship Wildfire as seen on Google Earth, where it was purportedly “discovered.” The people of Qeqertarsuaq, Greenland, however, have always known it was there. (Harper collection)

A Scottish newspaper announced, “Remarkably, the ship was only located after images of the wreck were captured on Google Earth.”

The ship, when first spotted from the eyes in the skies, was thought to be the remains of a Norse longship. That would have been bigger news, but it turned out not to be the case. Rather, it was a Dundee whaler, sunk in Qeqertarsuaq Harbour off Greenland’s Disko Island.

A Scottish maritime expert gushed, “What a historic gem has come from the blue.”

A researcher located the ship using Google Earth in 2016. Once the possibility of a Norse longship was discounted, research showed that it was a lost ship, the Wildfire.

The Canadian maritime archaeologist and historian James Delgado knew of the ship. He had explored another sunken vessel, McClintock’s Fox in 2003; it lay less than a kilometre from the Wildfire.

The “discovery” may have brought knowledge of this ship to the attention of the wider world, but was this really news?

It was not a mystery to the people of Qeqertarsuaq. They had always known what it was, where it was and even its name. That’s because the ship rested in water only three to four metres deep.

For many years part of the vessel remained above water. It is clearly visible in photographs taken about 25 years after its sinking. Even today, the outline of the ship beneath the surface can be seen from the shore, only 50 metres away.

The Wildfire was built in Quebec in 1853. It was “287 tons register”—a phrase used to describe a ship’s cargo-carrying capacity. In 1868, she was owned by the Tay Whale Fishing Company, a prominent Dundee business that also owned the Victor and Intrepid. 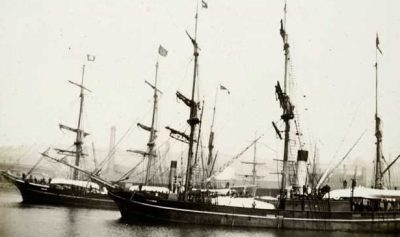 The ship left that port on March 10 under Capt. Henderson. After fishing unsuccessfully—whalers usually referred to what they did as “fishing,” even though the whale is not a fish—off the south Greenland coast, Capt. Henderson steered it farther north, accompanying most of the other ships in the Dundee fleet.

More bad luck ensued. The ship’s screw propeller was damaged by a heavy piece of ice, and the captain turned south and put in to Holsteinsborg—present-day Sisimiut—about 300 miles distant. He ran the ship ashore and, during three successive low tides, a new propeller was installed.

Back at sea again, instead of heading north along the Greenland coast, Capt. Henderson steered his vessel southwest across Davis Strait to Cumberland Sound.

But he found the entrance to the sound was blocked by ice. While attempting to get to what he described as “the usual fishing station”—probably Naujaartalik, known to the whalers as Niantilik—a piece of ice struck the bow and damaged the ship.

“The blow was so severe that the iron and wooden fortification at the bow was driven inwards as far as the forecastle,” reported The Dundee Courier.

Water rushed into the hold. The pumps were activated, but the vessel was filling rapidly.

Capt. Henderson made a dangerous decision, but with Niantilik inaccessible, it may have been his only course of action. He headed back into Davis Strait, hoping to make Lievely, as the community at Qeqertarsuaq on Disko Island was then known to whalers and explorers.

The distance was about 500 miles, and the men manned the pumps the entire way. When the ship reached Greenland, the captain ran it aground near the settlement, and the crew, numbering about 50, quickly abandoned ship. 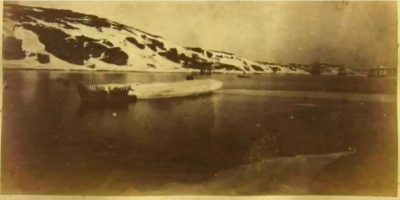 The Wildfire about 25 years after it sank. (Harper collection)

The Danish authorities accommodated them comfortably, but they had to wait six weeks before they were able to leave for Europe. The Danish vessel Constance took 35 men to Shetland, from where they made their way to Dundee. The remaining men, including the captain, caught a later ship for home.

The ship remained off Qeqertarsuaq, known to the local population, until its recent “discovery.” One man’s discovery is another man’s traditional knowledge.