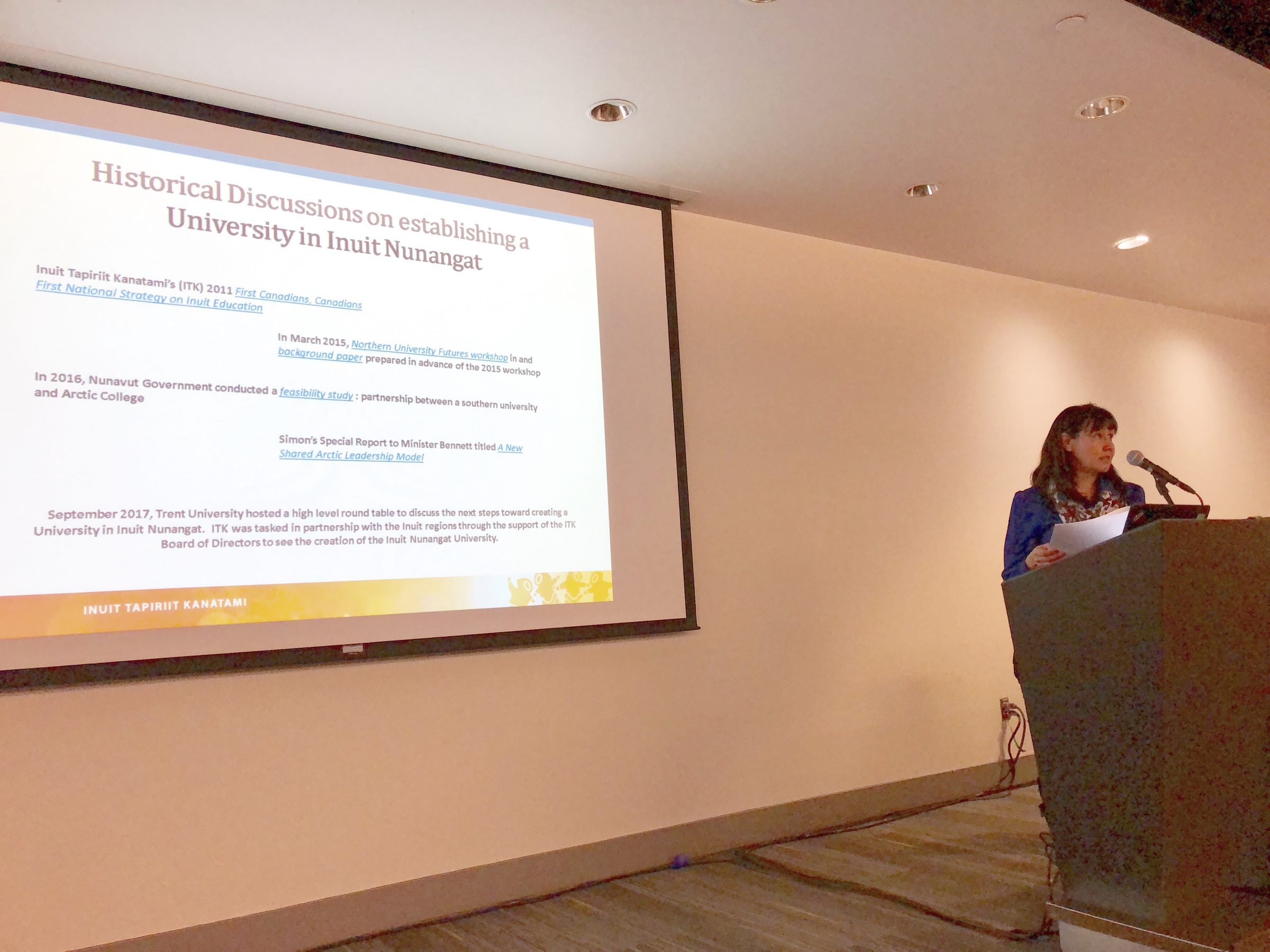 Heather Olchaski of Inuit Tapiriit Kanatami presents a slide showing discussions about an Inuit Nunangat University, on Dec. 12 at the ArcticNet conference in Ottawa. (PHOTO BY JANE GEORGE)

OTTAWA—Within five years, Inuit Tapiriit Kanatami wants to see an Inuit Nunangat university open its doors in one of the four Inuit regions of Canada.

That’s according to a timeline shared on Wednesday, Dec. 12, by ITK’s Heather Olchaski at the ArcticNet conference in Ottawa at a session on accessibility of education in the North.

The idea of a such a university is not new, but, from Olchaski’s update, it’s taken on a new momentum since Sept. 2017 when Trent University hosted a round table on future plans for the university.

Those gathered tasked ITK, in partnership with the Inuit regions, to work on the creation of the Inuit Nunangat university.

Members of the task force, a subcommittee of ITK’s national committee on Inuit education, are now advancing with a feasibility and business case, Olchaski said.

According to Olchaski’s presentation, before the university opens its doors, work would need to be done on its governance model, which could see a main university and satellites. There would also be planning for academics, faculty and administration.

An Inuit Nunangat university foundation would also be created.

In answer to a question from the audience, Olchaski said that, despite low educational attainment levels now in Inuit Nunangat, the presence of the university would encourage Inuit students to continue their studies.

ITK’s national Inuit Research Strategy, released earlier this year, states that “an Inuit Nunangat university should be established to enhance Inuit-led research capacity as well as for facilitating research governance and monitoring processes within Inuit Nunangat.”

While ArcticNet said 1,200 participants registered for its four-day conference in Ottawa, Inuit are still a small minority, as presenters and as observers.

The input of Inuit knowledge also still remains untapped in some research.

In one session, Larry Audlaluk of Grise Fiord was unimpressed by a presentation on predation and snow geese. It concluded that more predation was linked to greater numbers of foxes, prompting Audlaluk to say that he could have told the researcher right away that “the fox controls that.”

ITK said an Inuit Nunangat university would help fix this kind of situation, by building capacity among Inuit researchers and providing “education, training, and accreditation across disciplines, as well as serving to advance Inuit research capabilities and priorities.”

Since the 1990s, the federal government has allocated hundreds of millions of dollars for research taking place in Inuit Nunangat.

In 2015, those at an Iqaluit workshop on the plan for a university came up with a suggested name: Inuit Nunanganni University Kanatami, which forms the acronym: INUK.

The workshop participants suggested that Inuit language and culture lie within the core of the institution’s academic and research work.