The Arctic Ocean is becoming more like the Atlantic and Pacific, studies say

“In many respects, the Arctic Ocean now looks like a new ocean.” 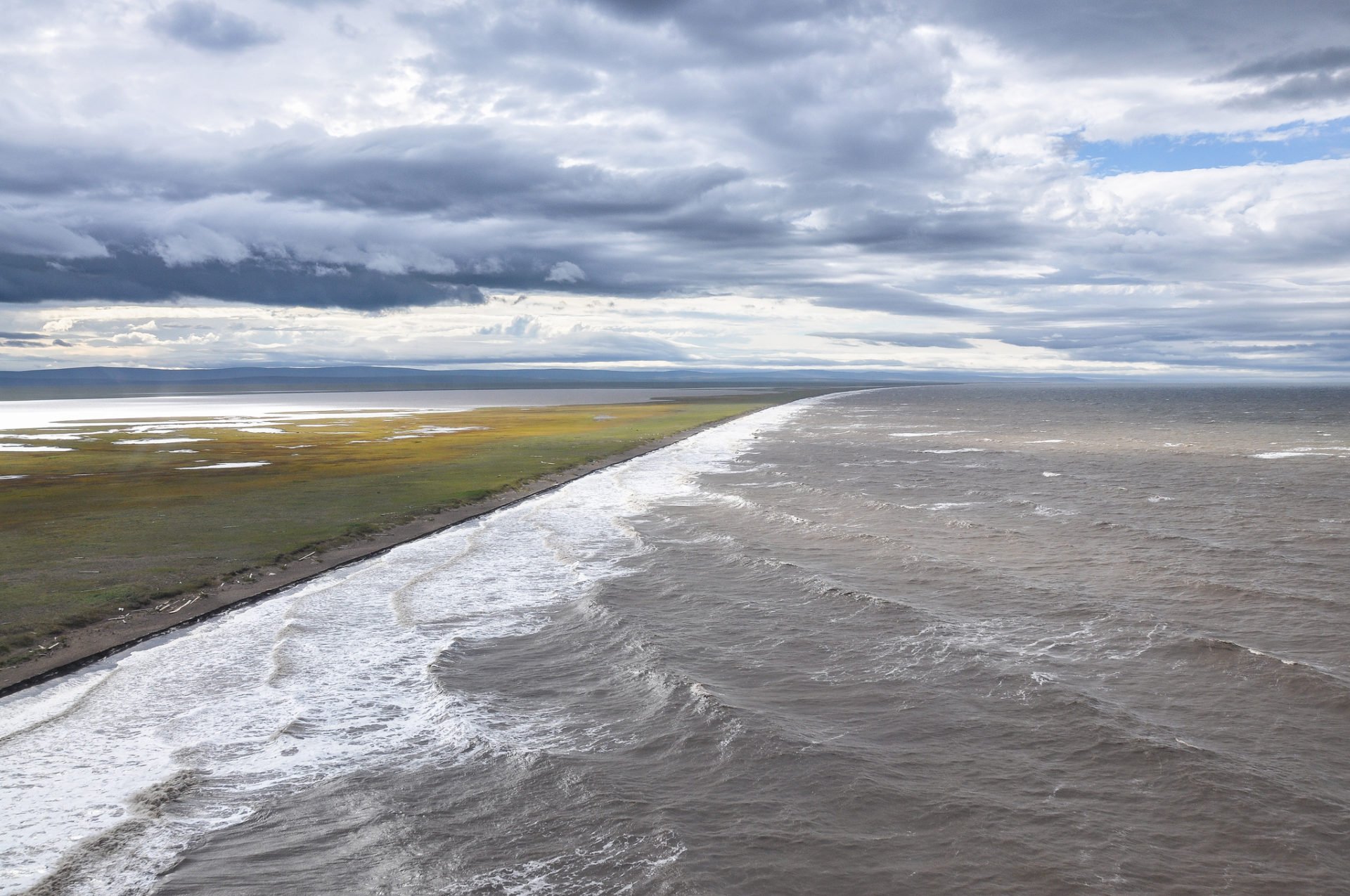 Waves break along the Chukchi Sea coast on Alaska’s North Slope in an Aug. 2012 file photo. The Arctic Ocean stands to see higher waves as it becomes more like the Atlantic and Pacific oceans. (BOEM)

A new Arctic Ocean is emerging with more algae blooms, bigger waves and more similarities to the Atlantic and Pacific oceans, according to a series of recently released studies.

Blame — or credit — should go at least in part to the loss of sea ice and in the seas peripheral to the Arctic Ocean and the increase in heat that those peripheral seas are sending north, the separate studies say.

“In many respects, the Arctic Ocean now looks like a new ocean,” Igor Polyakov, an oceanographer with the University of Alaska Fairbanks and a lead author of one of the studies, said in a statement released by the university.

Polyakov’s study, published in the journal Frontiers in Marine Science, analyzes 37 years of data that track the “borealization” of the Arctic Ocean. But borealization means different things on the European side than on the American-Asian said, said the study, a collaborative effort between scientists at UAF, the Finnish Meteorological Institute and other institutions from the United States, Canada, Norway, Sweden and Russia.

The study identified temperature, chemical and biological changes in the Arctic Ocean that are being driven by the connected subarctic waters.

On the European side of the Arctic, where warmer Atlantic waters are flowing in from the Barents and Kara seas, there is more mixing of saltwater with freshwater, the study found. The mixing is enhancing biological productivity. In contrast, the American-Asian side of the Arctic, which is influenced by the Bering and Chukchi seas, is getting more freshwater from ice melt and river outflow, the study found. That freshwater lies atop heavier saltwater, reducing the mixing and potentially reducing future productivity, the study said.

The Atlantification of the European Arctic and the Pacification of the American-Asian Arctic are expected to continue into the future, Polyakov said. “Within several decades we will see probably increasing regional contrasts in the Arctic, as the current climate models suggest,” he said by email. 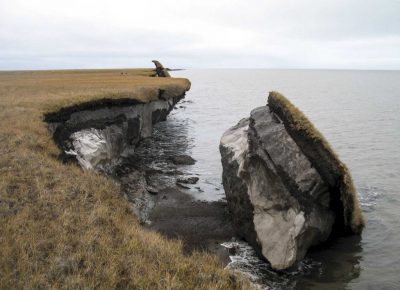 A collapsed block of ice-rich permafrost along Drew Point, Alaska, at the edge of the Beaufort Sea. Increased wave action combined with permafrost thaw is likely to severely erode some Arctic coastlines. (USGS)

Another study, conducted by scientists at Stanford University and published in the journal Science, tracks found that primary production (the creation of energy, mostly through photosynthesis, that forms the base of food chains), increased by 57 percent between 1998 and 2018 in the Arctic Ocean.

Now, the Arctic Ocean’s phytoplankton boom is no longer simply a product of more sunlight penetrating through the thinned ice or open waters, the study found. While loss of ice was the big driver of phytoplankton biomass increase during the first decade of the study period, a new factor became dominant in the second decade of the period; inflow of nutrients from the adjoining seas and oceans.

“We knew the Arctic had increased production in the last few years, but it seemed possible the system was just recycling the same store of nutrients,” Kate Lewis, the lead author, said in a statement released by Stanford. “Our study shows that’s not the case. Phytoplankton are absorbing more carbon year after year as new nutrients come into this ocean. That was unexpected, and it has big ecological impacts.”

Whether the ecological impacts of that increased productivity is a good or bad depends on the species, said co-author Kevin Arrigo, the head of Stanford’s Ocean Biogeochemistry Lab.

“There’s going to be winners and losers,” Arrigo said in the university’s statement. “A more productive arctic means more food for lots of animals. But many animals that have adapted to live in a polar environment are finding life more difficult as the sea ice retreats.”

One possible benefit would be increased absorption of atmospheric carbon, but the Arctic is too small to offset much of the world’s greenhouse-gas load and “it’s not something we’re going to be able to rely on to help us out of our climate problem,” Arrigo said in the statement.

Another change coming to the Arctic Ocean is a dramatic increase in wave action, according to a study by scientists from Environment and Climate Change Canada.

If current rates of carbon emissions continue, the biggest Arctic Ocean waves in areas close to shore can be expected to double or triple in height by the end of the century compared to conditions measured in the 1979-to-2005 period, according to the study, published in the journal JGR Oceans.

This would set up Arctic coastal residents for some potentially dire consequences. A particularly hotspot is likely to be the Beaufort Sea coast, already eroding dramatically because of greater wave action in increasingly open waters combined with the thaw of permafrost that previously helped hold shore bluffs intact. Storm events that used to have a 1-in-20 probability in the 1979-2005 period will become likely to occur every two to five years after 2080, according to the study.

“It increases the risk of flooding and erosion. It increases drastically almost everywhere,” lead author Mercè Casas-Prat said in a statement released by the American Geophysical Union. “This can have a direct impact to the communities that live close to the shoreline.”

Offshore, the biggest waves can up to 6 meters higher than levels seen from 1979 to 2005, the study said. The increasing influences of the Atlantic Ocean on the Arctic Ocean will be driving a lot of new wave action, and ocean waves will extend even to areas near the North Pole if current emissions levels are sustained, the study said.