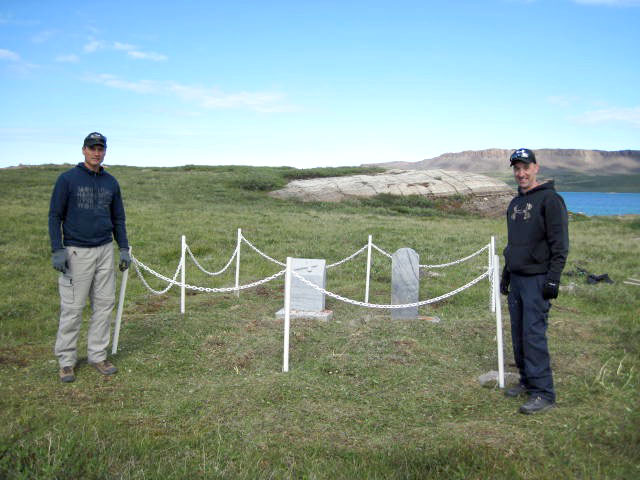 In this photo from 2016, members of the Kugluktuk RCMP detachment visit the graves of Cpl. William Andrew Doak and trader Otto Binder, both of whom were murdered in 1922 at Tree River. (Photo courtesy of the RCMP)

While travelling in the eastern reaches of Inuinnait territory, Danish explorer Knud Rasmussen heard a story about the enforcement of Canadian justice on two Inuit who had committed murders.

In 1921, word reached Const. W.A. Doak at the newly established Tree River RCMP detachment that five Inuit had been murdered on Kent Peninsula.

Doak set out to investigate. He discovered that a number of the reported killings had occurred because of domestic disputes.

One man, Tatamigana, had killed two other men, then together with his nephew, Alikomiak, a young man about 16 or 18 years of age, killed a third man, Pugnana.

Doak arrested both men and took them back to Tree River. 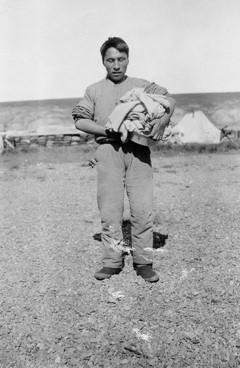 The officer took a personal interest in young Alikomiak and made him a kind of servant. Alikomiak cleaned the house, looked after Doak’s clothing and did other menial work.

On April 1, Doak rose from bed and called for his young servant to bring him his sealskin boots. Alikomiak threw them to him, but Doak threw them back at him, telling him the soles were not supple enough and needed to be chewed. This was woman’s work, as Alikomiak well knew.

He also spilled the slop bucket, and was chastised and thrown out of the house. Alikomiak brooded throughout the day. That night, he went to a storehouse and came out with a rifle and four bullets. He entered the house and, with no warning, shot Doak in the upper leg. He then sat down and calmly watched as the officer bled to death.

A trader, Otto Binder, who lived nearby, was in the habit of making a morning call on Doak. The next morning when Binder was halfway to the police post, Alikomiak broke out a window pane and fired one shot through the trader’s heart. Binder died instantly.

Alikomiak then went to Binder’s house and told the trader’s Inuit common-law wife what he had done, and announced he was going to the camp nearby to kill all the other white men.

One of the Inuit secretly sent his son ahead to warn the whites, and another officer, Sgt. Woolams, arrested Alikomiak, who had just finished boasting that killing a white man was as easy as killing a ptarmigan.

That summer, Alikomiak and Tatamigana were both taken to Herschel Island aboard a Hudson’s Bay Company ship to be tried for murder. 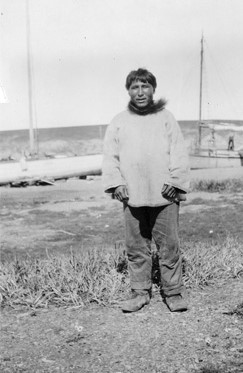 Tatamigana, photographed at Herschel Island in 1923, the year before he was hanged. (Photo by Stuart Taylor Wood, courtesy of Libraries and Cultural Resources Digital Collections, University of Calgary (CU1228012))

However, the policymakers in Ottawa had made a strategic decision.

Sinnisiak and Uluksuk, two Inuit who had earlier been tried for the killing of two priests, had been treated leniently, to no avail; the leniency shown to them had not deterred further murders. This time, there would be no leniency: Tatamigana and Alikomiak would be found guilty and hanged.

The RCMP wrote to the Department of the Interior in 1922, recommending a trial be held in the Arctic where Inuit could see firsthand the workings of white man’s justice.

T.L. Cory, solicitor for the Northwest Territories Branch, concurred when he wrote, “The advantage in having the accused murderers tried in their own country among their own people, will be to bring home to the natives the result of their comrades’ actions … as kindness has failed in the past I strongly recommend that the law should take its course and those Eskimos found guilty of murder should be hanged in a place where natives will see and recognize the outcome of taking another life.”

Amazingly, only a few months later Cory was appointed to defend the very men he had thought should be hanged.

Judge Lucien Dubuc, of Edmonton, a stipendiary magistrate of the Northwest Territories, was assigned to carry out the trial at Herschel Island. The jurors were all white.

Tatamigana was convicted of the murder of Ikpukwak, but the six-man jury recommended mercy.

Both Tatamigana and Alikomiak were next convicted of killing Pugnana and sentenced to death. Finally, Alikomiak was tried for the murder of Const. Doak. The trial was held July 18, 1923, and took only one day. The verdict was, guilty.

But the trial, regardless of the guilt of Alikomiak, was a sham. The lumber to build the gallows had accompanied the judge’s party when it left Edmonton. A hangman travelled incognito with the court party.

Most damning, though, is the existence of a telegram from the deputy minister of justice to Judge Dubuc before the judge’s departure from Edmonton for Herschel Island.

It reads, “Eskimo trials you should consult police authorities as to the date and place of execution, understand they favour Herschel Island.”

So, the authorities had decided before the trial that a verdict of guilty would be the result, and that the inevitable sentence of death would result in a hanging.

Judge Dubuc waited some weeks before actually passing sentence. By the time he did, the gallows had already been constructed in the Herschel Island bone house, an old building for drying whale bone, left over from whaling days.

After the sentence was handed down, Alikomiak, grinning and uncomprehending, left the prisoner’s dock and handed the judge a cigarette as he passed the bench.

In my next column, I will write about a storm of protest against the upcoming executions, and Knud Rasmussen’s opinion of the whole affair.