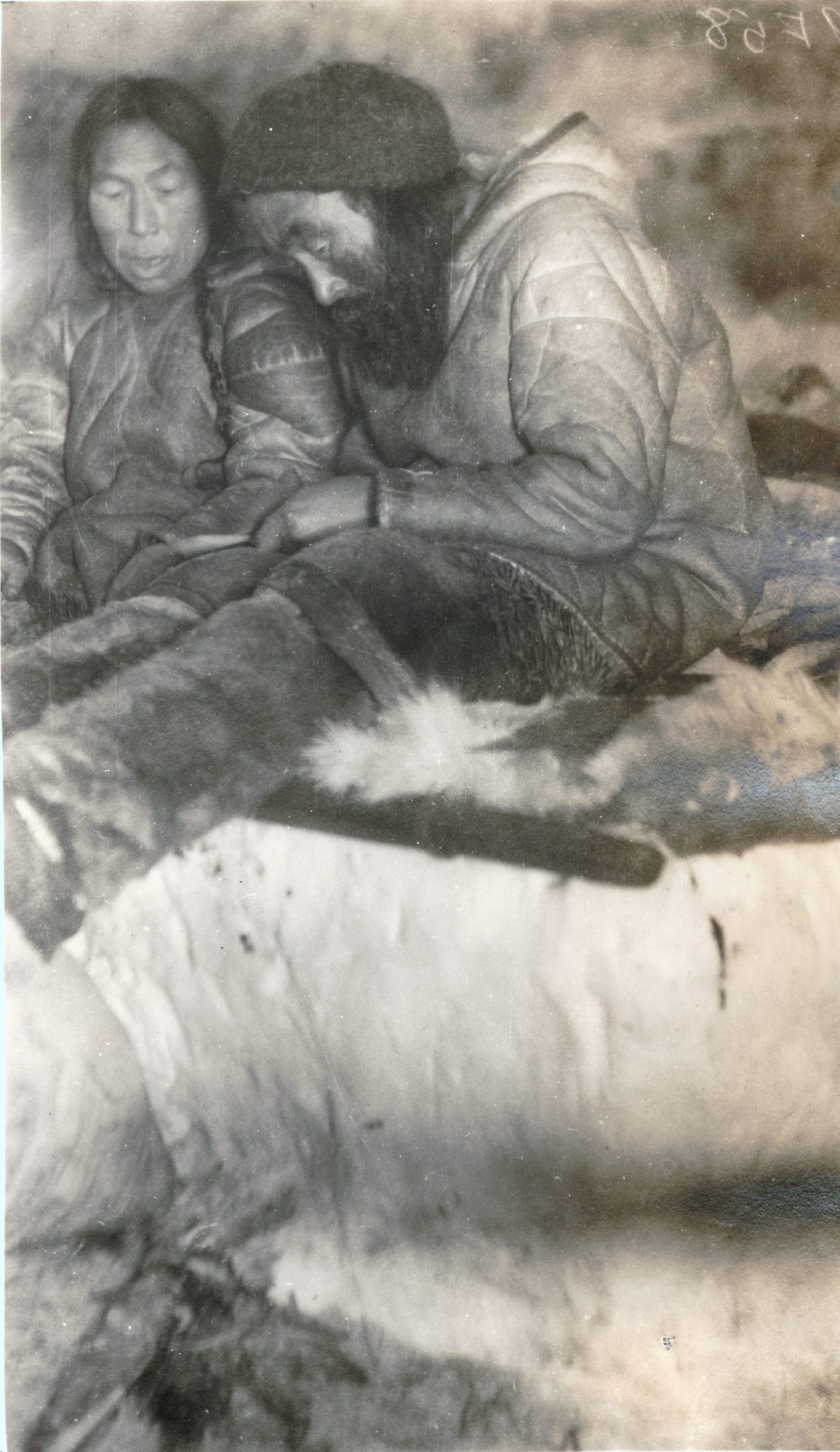 The shaman Aua and his wife Orulo, both storytellers, entertained Knud Rasmussen in their snow house during the Fifth Thule Expedition. (Photo by Therkel Mathiassen. Arktisk Institut, #147071)

The shaman Aua and his wife, Orulo

Knud Rasmussen returned to Danish Island from his all-too-short trip to the inland Inuit south of Baker Lake in mid-September 1922.

He had learned much about Inuit spirituality and shamanism on that trip. His documentation of their beliefs was groundbreaking, as were Kaj Birket-Smith’s writings on their material culture.

But they were, nonetheless, a minority group; now, back on the coast, he needed to immerse himself once again in the beliefs of Inuit who dwelt on the shores of a marine environment, and whose actions and activities were guided by a need to be wary of and placate the forces that controlled the sea mammals.

Rasmussen knew he needed to spend more time with a powerful shaman named Aua, brother to Ivaluardjuk, from whom he could learn much about the old ways of the coast dwellers. Rasmussen had first heard of Aua the previous December when he met his brother, Ivaluardjuk, at Repulse Bay.

Rasmussen described a dramatic meeting with Aua on the land. It was late January and the sun had only just returned to the southern horizon of Foxe Basin.

Perversely, this is the time of year when Arctic temperatures are at their most severe. Rasmussen and Qaavigarsuaq were hunting walrus at the flow edge. Rasmussen tells the tale: “It was bright starlight towards the close of the journey.… Suddenly out of the darkness ahead shot a long sledge with the wildest team I have ever seen. Fifteen white dogs racing down at full speed, with six men on the sledge.… A little man with a large beard, completely covered with ice, leapt out and came towards me, holding out his hand white man’s fashion. Then halting, he pointed inland to some snow huts.”

This was Aua, and he and Rasmussen were to become fast friends.

For the next two weeks, the Greenlanders accompanied Aua and the other Iglulingmiut — for that was their cultural affiliation — on hunting expeditions during the day. In the evenings, Rasmussen listened, and questioned sparingly, collecting material on the spiritual life of these particular Inuit.

Rasmussen took a practical approach to the collection of folklore: “One is altogether dependent upon the character and temper of one’s sources; it is essential to have native authorities not only qualified in regard to knowledge of their subject but also gifted with the right appreciation of it themselves. They must be reliable, so that one can listen without criticizing all the time, and one should if possible be on friendly terms with them throughout.”

Aua and his wife Orulo met these requirements perfectly, drawing, in their storytelling, on their symbiotic lifetimes of diverse experience.

“What one did not know the other did,” wrote Rasmussen.

But, thought Rasmussen, he wasn’t hearing everything. Aua was, after all, a shaman. “A faithful spirit conjuror,” he realized, “cannot disclose the secrets of his life without weakening his relationship to the supernatural.”

And so the old man, while helpful and co-operative, displayed a certain reticence. Nonetheless, Rasmussen had learned a great deal from this first extended visit.

After his return from the inland Inuit, Rasmussen knew he needed to spend more time with Aua. He planned to do this in nearly 1923, before departing on his grand sled trip to Alaska.

But in the fall of 1922, something had happened that Rasmussen worried might throw a wrench into his plans. That fall Aua had converted to Christianity, as had many of his countrymen that same year. Rasmussen worried that this might cause the old man to be hesitant — perhaps to the point of refusal — to discuss the old beliefs.

And so it was with some trepidation that Rasmussen visited Aua’s camp in January of 1923. Dispensing with formalities, he cut to the chase in expressing his hope that his conversion to a new belief system would not hamper their working relationship.

“To my great joy he answered that this would not be the case,” wrote Rasmussen.

“He explained that he indeed had sent away his helping spirits, as he had no more use for them, but that this was exactly the reason why he could now tell all the secrets, which had been too sacred for him to communicate in the past.”

He had been reticent before, he explained, precisely because to disclose the secrets of his life then would have weakened his rapport with the spirit world. Now the opposite was true.

“All his knowledge was available to me,” wrote the ethnographer.

Aua’s conversion to Christianity, therefore, actually facilitated the transmission of his knowledge to Rasmussen. When a shaman converted to Christianity, it turned out — at least in Aua’s reasoning — he was then able to freely talk about his knowledge and previous practices without fearing the loss of his power.

As the scholars Frédéric Laugrand and Jarich Oosten point out, the adoption of Christianity did not mean that Inuit had forsaken their belief in shamanism, but merely that they no longer practised it, and, in Aua’s case, that he had sent his tuurngait away. In fact, Aua told Rasmussen that he had sent his helping spirits to his sister on Baffin Island.

Rasmussen’s conversations with Aua and Orulo were extremely productive. In the next instalment, I will share some of the wisdom that Aua shared with Rasmussen.