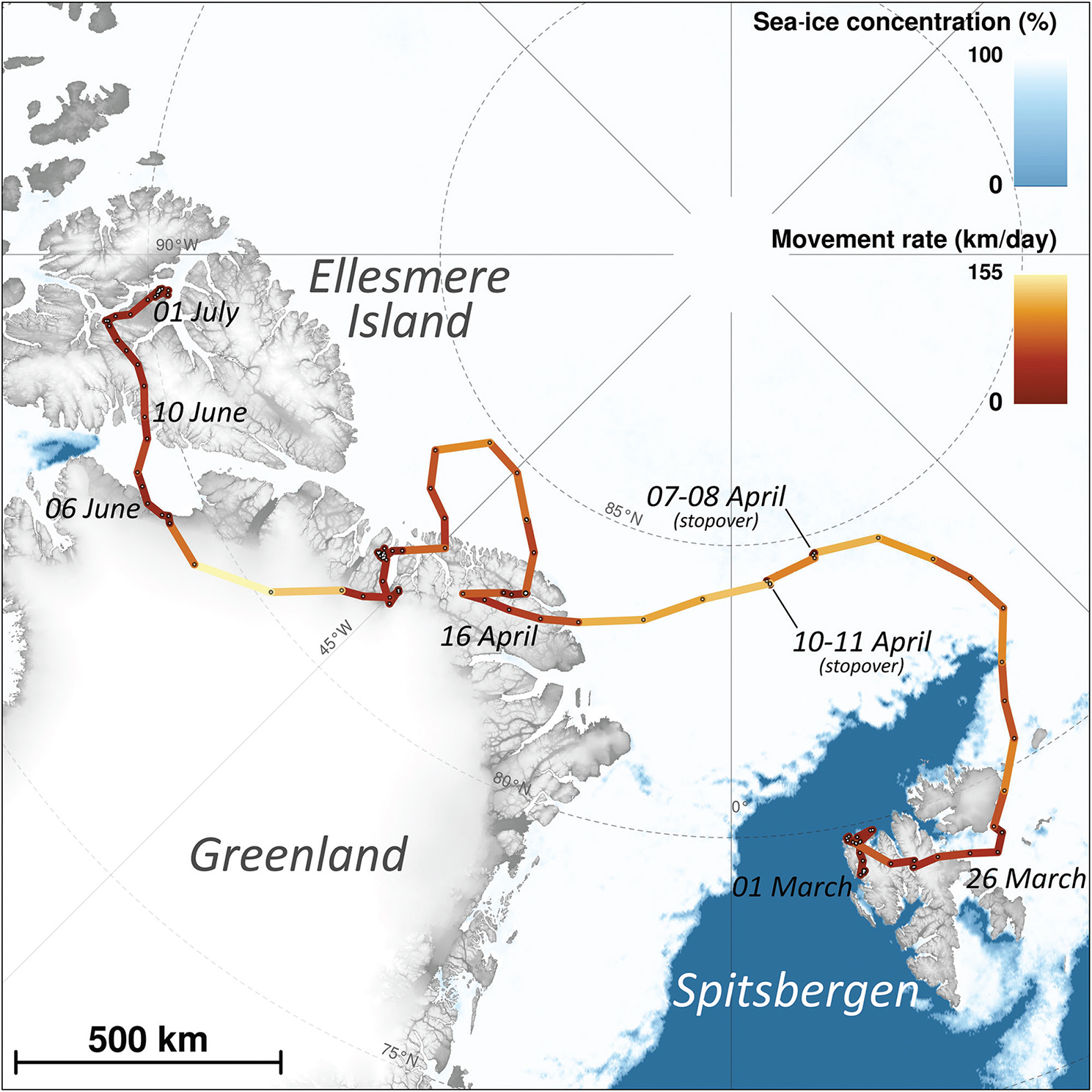 This map shows the route taken by an Arctic fox that travelled over a period of three months from Svalbard to Ellesmere Island, covering a total distance of 3,506 kilometres. (Image courtesy of Polar Research)

These paws are made for walkin’

An Arctic fox travelled 3,506 kilometres over three months across sea ice and the Greenland Ice Sheet to relocate from Svalbard to Canada’s Ellesmere Island.

That’s the finding of a new paper published in the Norwegian Polar Institute’s journal, Polar Research.

It’s written by Eva Fuglei with the Norwegian Polar Institute and Arnaud Tarroux with the Fram Centre’s Norwegian Institute for Nature Research.

“The short span of time spent covering such a distance highlights the exceptional movement capacity of this small-sized carnivore species,” the paper states.

As part of a larger study that observed the movements of a total of 54 foxes, the fleet-footed vixen was captured in a cage trap and fitted with a satellite transmitter on Spitsbergen, the largest island in Norway’s High Arctic archipelago of Svalbard.

Her final destination ended up lying 1,789 kilometres away, when the two points are connected by a straight line, but the fox took a route with many twists and turns along the way, making the distance travelled by foot much farther.

“This is, to our knowledge, the fastest movement rate ever recorded for this species,” the paper states.

The fox moved the most quickly while crossing the ice sheet in north-western Greenland, where, researchers note, foraging opportunities would be few and far between.

She also tended to move quickly on the sea ice, but slowed down for 48 hours on two occasions. This may have been because of blizzards or other bad weather, the researchers write, or it could be that the fox found food near open water, where seabirds and marine mammals gather.

Other researchers have suggested that Arctic foxes can smell marine carrion on the sea ice from as far as 40 kilometres away.

It’s not unheard of for Arctic foxes to traverse such distances. An adult female Arctic fox was previously tracked travelling 4,599 kilometres across the Canadian Arctic, but over a longer period of 5.5 months. In this case, as well, the fox used sea ice as a bridge to distant regions, the paper says.

And the research paper notes that, during his 1885 expedition to the North Pole, the Norwegian explorer Fridtjof Nansen spotted the tracks of an Arctic fox at 85 degrees latitude. “What in the world was that fox doing up here out on the wild sea?” he wrote in his journals.

The researchers say that this female fox’s journey helps answer that question. Rather than having simply wandered astray, the researchers say such Arctic foxes “are likely engaged in long distanced dispersal.”

Climate change could result in more isolated Arctic fox populations, if the sea ice that the species uses as a bridge continues to dwindle.

“If Svalbard becomes ice-free throughout the year, it will imply an isolated Arctic fox population there, entirely cut off from other Arctic foxes,” the paper states.

But “such fox populations may still be highly viable, as they are in Iceland and the Beringian islands, where isolated Arctic fox populations persist in a substantially warmer climate.”

An earlier version of this story stated that the fox travelled 4,415 kilometres over 76 days. While the fox did travel that total distance—from the site at which it was born to Ellesemere Island—it did so over a longer period, from March to July 2018.