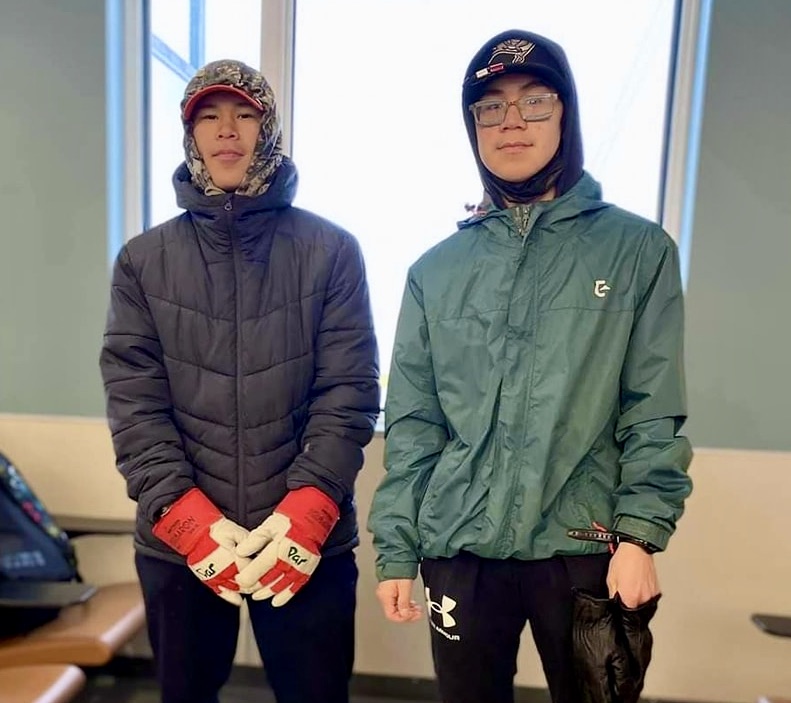 Taloyoak’s Darius Aleekee, 17, (left) and Jonathan Eetoolook, 16, are attending the Academy of Hockey Training and Development this year in Gravenhurst. Ont. They are staying with a host family and attending classes with a tutor in between sharpening their skills on the ice. (Photo courtesy of Darius Aleekee)

After a 16-hour journey from Nunavut to Edmonton to Toronto, Darius Aleekee and Jonathan Eetoolook are rested and ready to hit the ice.

The two teens from Taloyoak arrived in Gravenhurst, Ont., last month to join the Academy of Hockey Training and Development, a sports organization focused on developing the skills of youth interested in pursuing higher levels of hockey.

Over the next few months, the two will learn about what it takes to be a high-level hockey player through on-ice training and off-ice strength-building conditioning, all while living together with a host family and attending classes with a tutor.

The boys’ experience at the academy is thanks to sponsorship support from the non-profit Indigenous Kids Network of Canada and the Inuit Child First Initiative, a government-funded program to help Inuit youth access health, social and educational support.

“It’s been hard at times when you’re trying to get approved for [funding],” said Aleekee, 16, who plays defence. “They did so much work for us,” he said of the groups.

“I really appreciate them.”

Aleekee and Eetoolook, 17, are big fans of Jordin Tootoo, the first Inuk to play in the NHL, and it was through following the retired star on social media that the boys were inspired to go after their hockey dreams, they said.

Eetoolook, who plays left wing, reached out to the Academy of Hockey online and connected with Troy Kahler, the founder and director of the program. 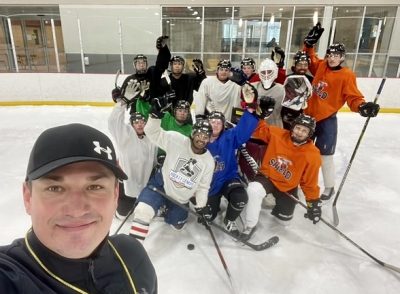 Darius Aleekee and Jonathan Eetoolook (back left) pose with other students from the Academy of Hockey Training and Development at Graeme Murray Arena in Gravenhurst on Tuesday. Troy Kahler, program director, says the two teens from Nunavut will be training and studying until the season ends in March. (Photo courtesy of Troy Kahler)

“[We] just started talking about their situation and what they were trying to do,” Kahler said.

After eventually securing funding, the pair arrived in Gravenhurst on Nov. 14. Once their insurance was approved, they finally hit the ice at Graeme Murray Arena on Monday.

“It’s good to be back on the ice,” Eetoolook said after his first practice with the academy’s coaches. He said he and Aleekee are still getting used to their new skates and equipment, but are already looking forward to more skating and shooting tests out on the ice.

Kahler said the pair will be in the program every day for the season.

“They’re having a lot of fun. They’re busy. It’s probably the [busiest] they’ve ever been … so their days are packed now,” Kahler laughed.

“They’re not used to that but it’s a good thing because they understand accountability and their organizational [skills].”

Eetoolook loves the Maple Leafs and Auston Matthews, while Aleekee prefers the Edmonton Oilers and Connor McDavid “because he’s fast,” he said, but they differ in their hockey ambitions.

While Eetoolook dreams of one day playing in the NHL, Aleekee’s long-term goal is to use hockey as an opportunity to help younger players back home.

“For me, the most exciting thing is coaching,” Aleekee, who also aspires to be a doctor, he said. He wants to improve his own skills on the ice so he can help other kids in Nunavut do the same.

“They actually do want to play hockey but they can’t afford the equipment … everything is expensive,” he said.

It’s something he and Eetoolook have experienced firsthand and anticipate will continue to be an obstacle if they want to keep playing hockey in Ontario. They want to see more opportunities for Inuit youth to pursue hockey at a high level in their own territory.

It will take a lot of hard work and dedication to build up their hockey skills to a level that would attract scouts, but both Aleekee and Eetoolook said they are ready for the challenge and feel the full support of their families and friends.

“My grandmother, she cried the day I was leaving because of how proud she was of me,” Aleekee said.