Thomas Berger remembered as ‘an ally to all Inuit,’ says QIA president 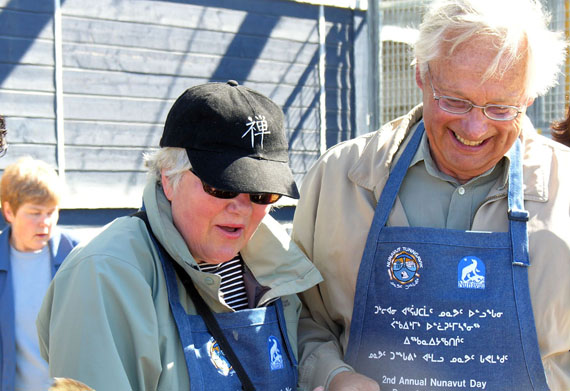 Thomas Berger (right) is pictured here with his wife at Nunavut Day celebrations in Iqaluit in 2005. (File Photo)

Berger died on Wednesday at the age of 88.

“I had the pleasure of meeting and working with Justice Berger … he was a friend and ally to all Inuit,” P.J. Akeeagok, the president of Qikiqtani Inuit Association, said in a written statement.

“His paramount work has shaped our future for the better.”

The two worked together in 2017 when Berger was on a panel to resolve a dispute between QIA and Baffinland Iron Mines Corp.

In the 1960s and ’70s, Berger was the lawyer for the Nisga’a Nation in the Supreme Court case Calder v. British Columbia, where Indigenous title to land was recognized for the first time in Canadian law.

In 1974, as the Supreme Court of British Columbia Judge, Berger broke with tradition and heard evidence from not only oil companies but over 35 communities in the Northwest Territories about the proposed Mackenzie Valley Pipeline.

“The future of the North ought not to be determined only by our own southern ideas of frontier development … it should also reflect the ideas of the people who call it their homeland,” he wrote in his report on the pipeline proposal.

Keeping caribou populations healthy was one of the concerns shared by those Berger consulted.

“They know the power of the white man,” he wrote. “They know that elsewhere the great animal herds have died off with the advance of agriculture and industry.” 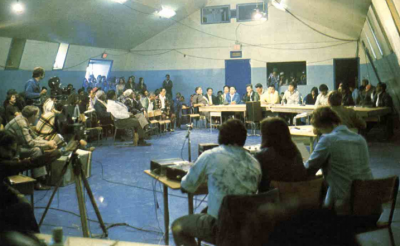 “These people fear that the white man may destroy their land and the caribou,” he wrote. “They and the caribou have made a long journey together across time and the continents … is this journey to end now?”

Ultimately, the pipeline, which was slated to pass through Indigenous communities in the Mackenzie Valley, was stopped.

Nunavut Premier Joe Savikataaq said in a statement that this set the standard for consultation with Indigenous peoples over land development and set the stage for the conclusion of land claim agreements in the Northwest Territories and Nunavut.

“It’s with sadness that we say goodbye to Justice Thomas Berger, who leaves a great legacy and impact across Canada’s North,” Savikataaq said. “[His] numerous contributions … have touched Nunavut significantly.”

In 2006, Berger recommended a bilingual English and Inuktitut education system for kindergarten through Grade 12 in the territory so graduates have the literacy skills needed to succeed in the workforce.

Savikataaq said this work was “critical in outlining the path forward for meaningful Nunavut Inuit participation in our territory and society.”

In Berger’s report on the Implementation of the Nunavut Agreement — specifically on addressing inequalities in Inuit employment within the Government of Nunavut — he wrote “where a people’s language thrives, their identity is more likely to be secure.”

Prime Minister Justin Trudeau also expressed his condolences in a statement, referring to Berger as “one of Canada’s most respected lawyers and Indigenous and environmental rights activists.”

“He truly listened, and in doing so, empowered a generation of leaders to become voices for their own communities,” Trudeau said.

Correction: This article was updated from an earlier version to correct the fact Thomas Berger was a former B.C. Supreme Court judge. The error was made in editing.