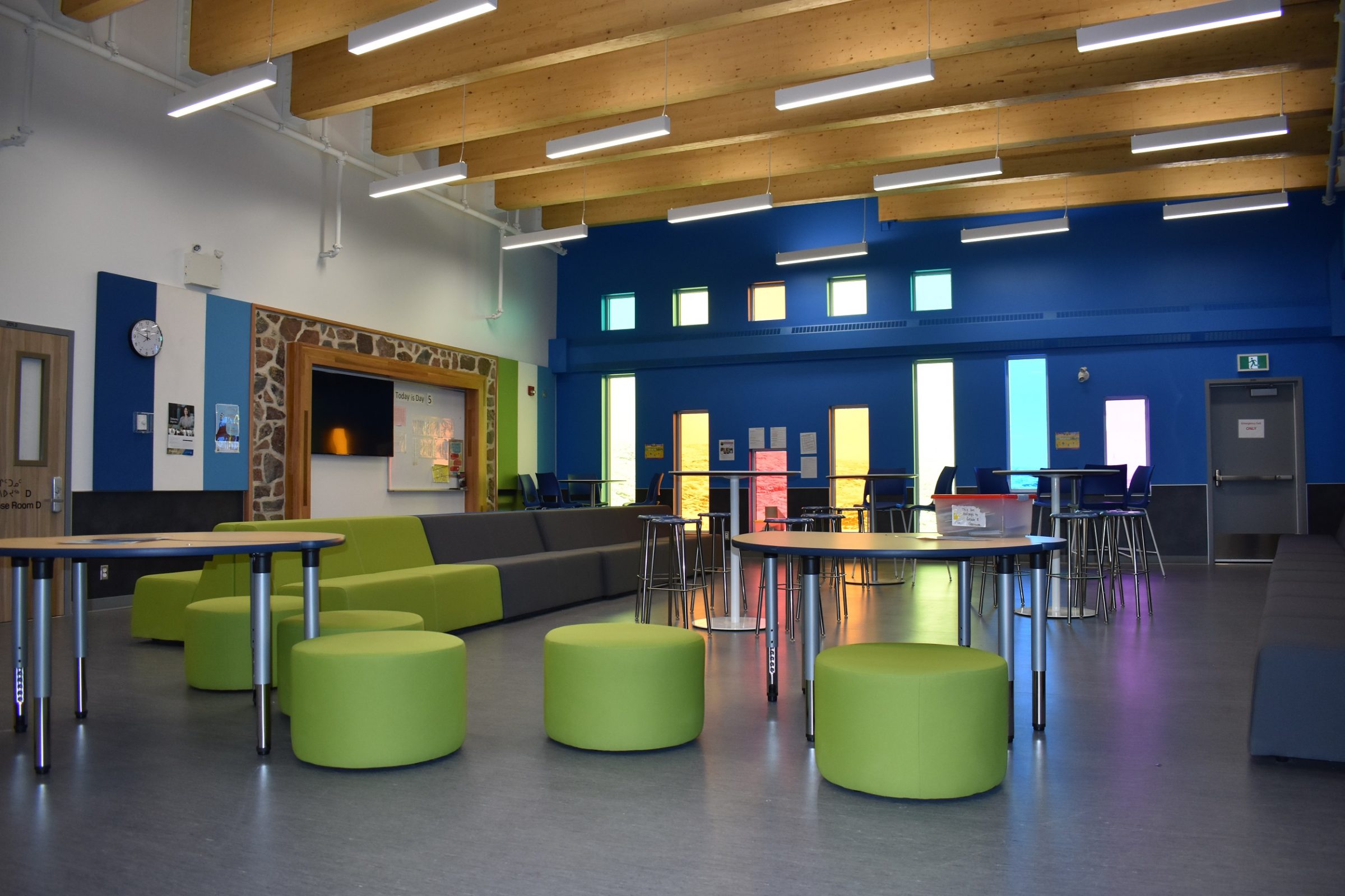 Arviligruaq Ilinniarvik school has a new, spacious lounge for students to gather in between classes. The new school opened in August 2019, two years after a fire destroyed Kugaaruk’s previous school. (Photo courtesy of Nunavut’s Department of Education) 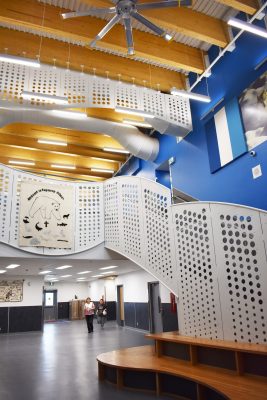 Arviligruaq Ilinniarvik’s front lobby and stairway. For its work on the school, Accutech Engineering has been awarded the Association of Consulting Engineering Companies-Canada’s 2020 Engineering a Better Canada Award and the 2020 Award of Excellence. (Photo courtesy of GN/Dept. of Education)

That evening, the veteran Kugaaruk teacher got a call: Kugaardjuq, the community’s only school, was ablaze. Ningark said he only fell asleep that night because he’d been told the fire was under control.

The community awoke the following morning to news that the school had been completely destroyed. All that was left was a stone archway that framed the building’s front entrance.

“It was very scary and sad,” said Ningark, who teaches Inuktitut and Inuit culture. “I thought, what are we going to do?”

Kugaaruk had not only lost its school, but an important community centre and cultural hub. Ningark had collected items from Kugaaruk’s late elders that were stored in the school, including hunting tools, traditional clothing, kayaks, drums and video footage.

“All these things I had collected over the last 20 years,” he said. “All gone.”

It has taken years for the community to recover from the loss. For two years, the school’s 360 students and staff worked out of portables and makeshift classrooms at the hamlet office.

The opening of the new school in August 2019 — renamed Arviligruaq Ilinniarvik — hasn’t replaced what was lost in the fire. But the spacious, modern facility has sparked pride and new interests for its staff, students and the wider community.

“We have everything that we need here,” Ningark said.

Ningark rhymes off all the new tools and equipment he has access to in his new wood shop. The new school also has a gymnasium with a stage — a facility students had no access to during the two-year period there was no school.

It also has an exercise room, a functional library and a bright, open student lounge with couches and stools. 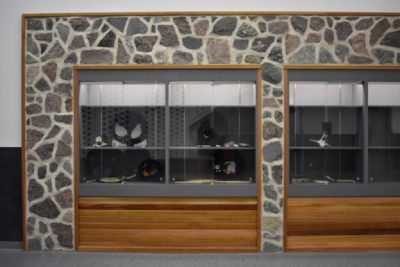 The stones that used to form an arch over the old school’s main entrance now frame the new school’s trophy case. (Photo courtesy of Nunavut’s Department of Education)

The front hall welcomes people in with high ceilings and a sweeping staircase, with metal and wood flourishes that mimic the ocean’s waves. A row of coloured windows allows in beams of coloured light.

Accutech Engineering, the firm that designed the school, repurposed the stones that used to form an arch over the school’s main entrance, by using them to frame the new school’s trophy case.

For its work on Arviligruaq Ilinniarvik, Accutech has been awarded the Association of Consulting Engineering Companies-Canada’s 2020 Engineering a Better Canada Award and the 2020 Award of Excellence.

Arviligruaq Ilinniarvik’s principal, Jason Hatt, started in his current role the same year the new school opened. He remembers walking into the new building for the first time.

“On opening day, I just remember watching the reaction of parents and students when they walked into the gym that first day. They were overcome with emotion, saying, ‘Oh my goodness, this is ours.’”

Hatt said there was an increase in student registration in the first year the new school opened.

Kugaaruk residents opted to rename the school Arviligruaq Ilinniarvik, or bowhead whale, to honour the whales’ recent return to the area.

Inuit have always hunted bowhead in the region, but commercial whaling largely wiped out the species in the early 20th century.

Bowhead whales re-appeared in the western Arctic in the 1990s; Ningark said Kugaaruk hunters harvested their first recent bowhead in 2005.