Through a magnifying glass, darkly 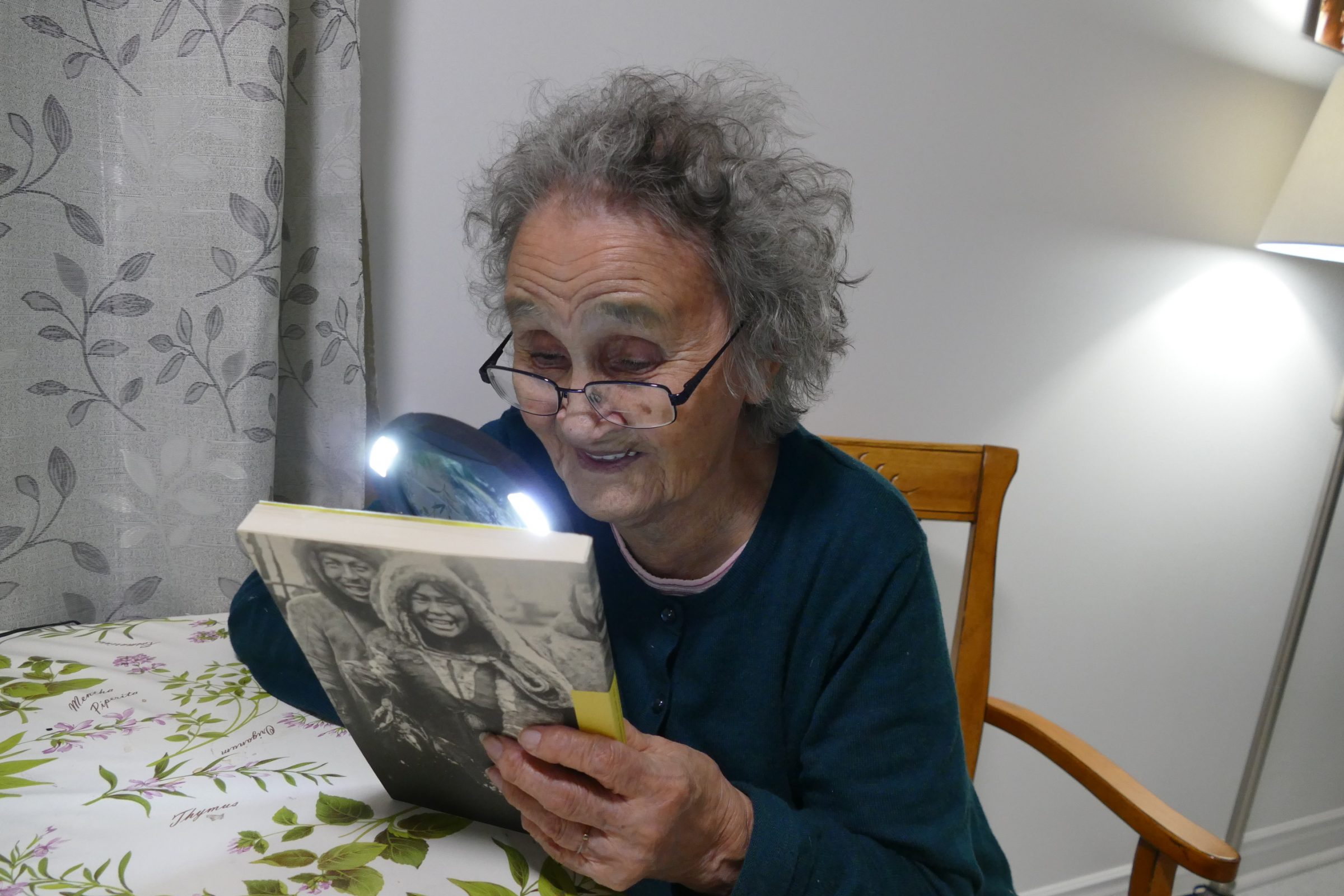 Christina Gordon of Kuujjuaq looks at a copy of a book by anthropologist Bernard Saladin d’Anglure that features her grandfather and great-grandfather on the cover. (Photo by Allen Gordon)

At 93, Christina Gordon’s eyesight is failing. But by peering through a large magnifying glass, the Kuujjuaq elder was recently able to see the faces of her grandfather and great-grandfather for the first time.

Both men have long since passed on. But their crinkled, weather-worn faces appear on the cover of a book, Traditional Social Organization among the Inuit of Kangiqsujuaq, Nunavik, written by Bernard Saladin d’Anglure, a well-known anthropologist who has worked extensively with Inuit from Nunavik and Nunavut. 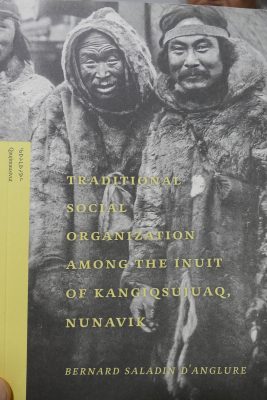 Traditional Social Organization among the Inuit of Kangiqsujuaq, Nunavik is written by Bernard Saladin d’Anglure, a well-known anthropologist who has worked extensively with Inuit from Nunavik and Nunavut. (Photo by Allen Gordon)

Christina first learned about the book, published in 2013, in December, thanks to her great niece, Ilisapi Gordon, who realized that the cover photograph featured their family.

The photograph of Christina’s grandfather, Davidie Qisaruassiaq, and her great-grandfather, Kauktungajaq, was taken more than a century ago, in 1897, on board the SS Diana, during William Wakeham’s exploration of the Nunavik coast.

“She was really surprised to finally see photos of her great-grandfather and grandfather,” said Christina’s son, Allen, who helped translate for his mother during a telephone conversation last week with Nunatsiaq News.

“When she was a young girl, they were already gone. She never saw them. She had only heard about them. But she said she was thrilled to finally see photos of family she never knew.”

When Christina’s daughter, Linda, saw the photograph, she remarked on the striking resemblance between the nose of Christina and that of her great-grandfather. Asked about this, Christina laughs and takes another look through the magnifying glass at the photograph.

“She’s getting a look at the picture, and her forehead looks exactly his his, with the folds,” said Allen. “She’s got that V notch, it’s almost identical. She’s looking at it, and she’s laughing.” 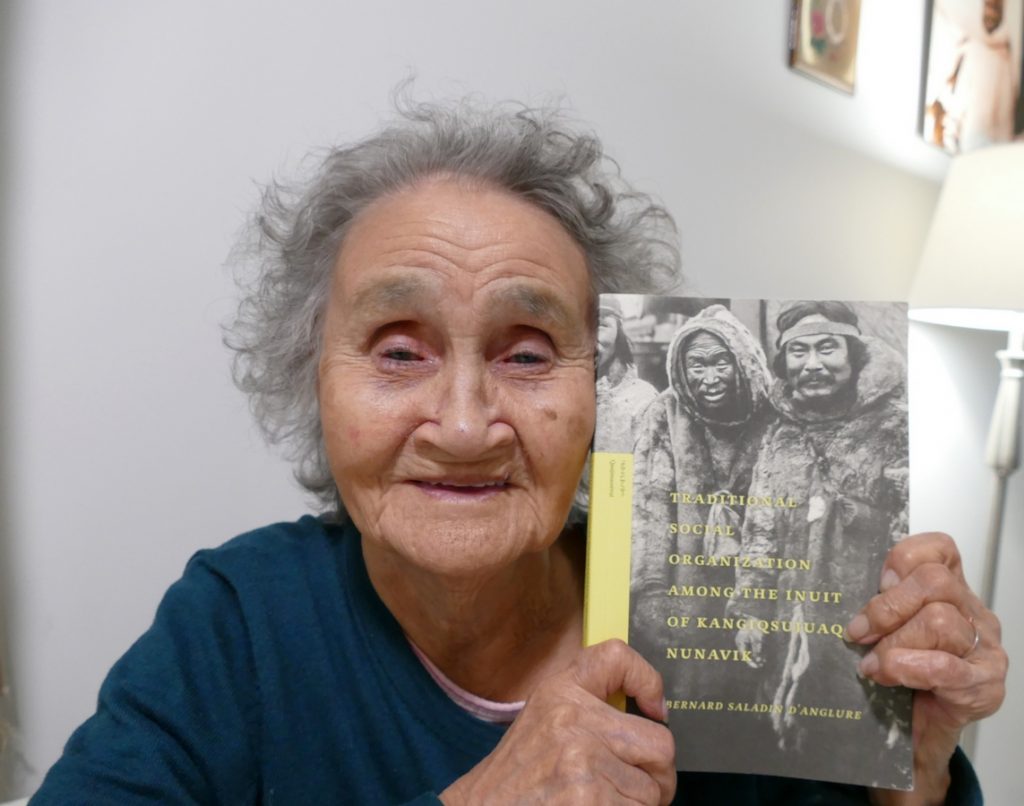 The caribou-skin clothing worn by the men are a clear indication to Christina that the photograph is from an earlier time.

“She realized this was another era, when Inuit were living in the old ways, said Allen. “They had caribou skin clothing, which was considered normal. But during my mother’s youth, it was pretty much only used during hunting trips. There had already been changes at the trading post.”

Christina has no memories of either man—both had died by the time she was a young girl. But the photograph brings back memories of being raised by her parents at the old Fort Chimo, five kilometres downstream of what’s now Kuujjuaq.

Christina’s father, Alex Gordon, worked for the Hudson’s Bay Company as a wood chopper, fishing nets repairman and handyman. Christina’s mother, meanwhile, “showed her everything about getting firewood and making back sacks to go get things,” said Allen.

Christina knows a little bit about her grandfather, Davidie Qisaruassiaq, who was a carver in the Fort Chimo trading post. Her grandmother, Pijurqi, who was Qisaruassiaq’s wife, was around during her youth.

The book’s cover credit says that Qisaruassiaq was “reputedly a shaman.” This came as a surprise to the family, said Allen.

“She had no clue. Honestly, when religion came, I think it was taboo to discuss any shamanism. The church was already established in the old trading post where my mother grew up, starting in 1903. So it might have been looked down upon.

“In the old days, there were good shamans and some considered evil. I don’t know where he fell,” he said with a laugh. “So some families don’t like talking about them.”

For Allen, the photograph provides another puzzle piece that fits into their family’s history.

He’s long been interested in stories, told by Christina’s grandmother, about how his family used to travel in umiak skin boats across the Hudson Strait, between Kuujjuaq in Nunavik and Kinngait, or Cape Dorset, on the south Baffin coast—a distance of more than 800 kilometres, as the raven flies.

“The very last trip, her grandmother was left behind in Fort Chimo, there was no room for her. They were supposed to come back for her in a year or so, but they never did,” said Allen.

“Something happened. I don’t know if there was a family illness or something. So we’ve always known that we’ve had families in Nunavut, in the Kinngait area.”

Recently, his family has done ancestry DNA tests, he said, “and that’s confirmed a lot of relatives in South Baffin.”

This only supports other evidence that Allen has come across. During a visit to Iqaluit about a decade ago, he found a book in Arctic Ventures by Peter Pitseolak, Kinngait’s famed photographer and artist, and in it, Allen quickly found references to his own family.

“I saw him talking about relatives in Fort Chimo of his, right away. And he starts talking about his great aunt, Pijurqi, which is my great-grandmother, my mom’s grandmother. So it’s all connected. Our oral history was confirmed in a book written in 1972, by Peter Pitseolak.

“The picture absolutely confirms what we’d been hearing about the Wakeham era, the connection between South Baffin, the Hudson Strait and Kuujjuaq. The photo for me really hit a chord. It just confirmed the story.”