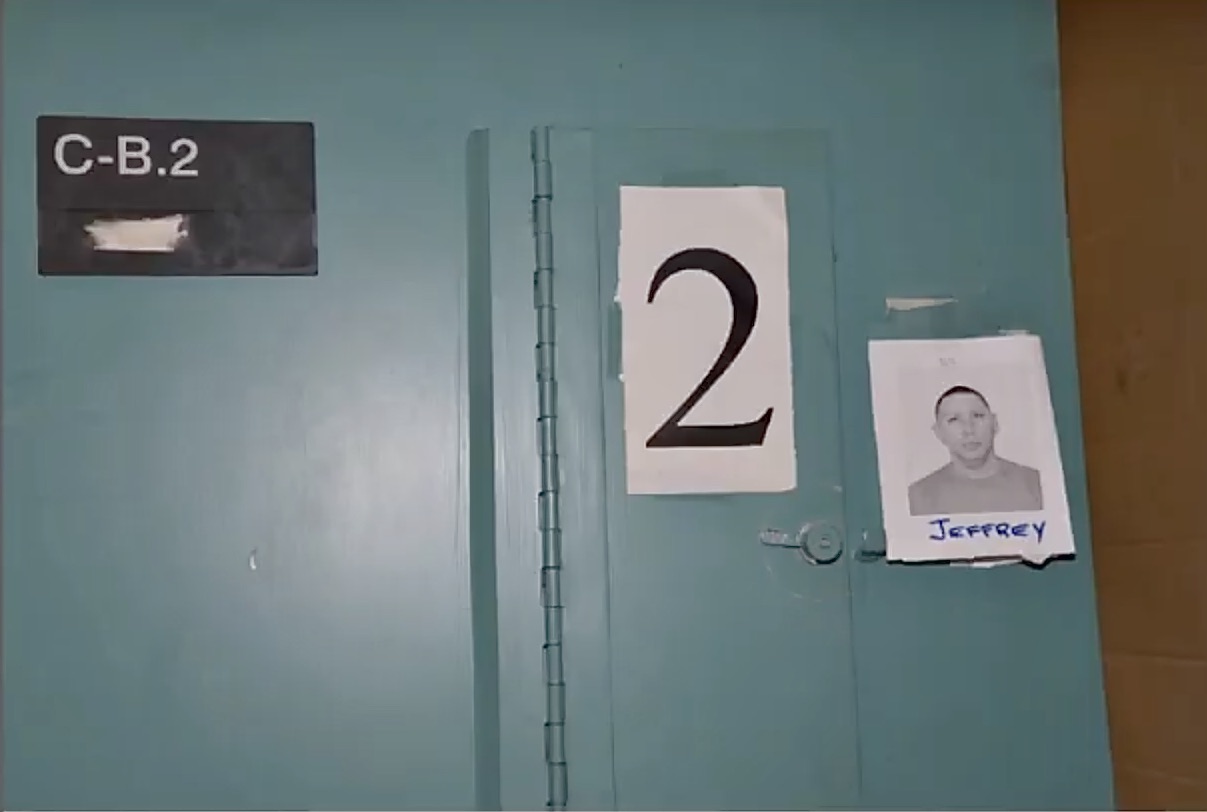 Mark Jeffrey, 34, died while in custody at the Beaver Creek Institution in Gravenhurst, Ont. He was found unresponsive in his cell after an apparent suicide. Pictured here is the outside of his cell door. (Photo courtesy of the Office of the Chief Coroner of Ontario)

An inquest into the June 2015 suicide of Inuk inmate Mark Jeffrey at the Beaver Creek Institution in Ontario continued Monday with testimony from the prison warden and Indigenous elders that helped clarify the timeline of events that led to Jeffrey’s death.

Jeffrey died in custody at the medium-security prison in Gravenhurst, Ont. The 34-year-old man from Iqaluit hanged himself in his cell after spending 74 days in segregation, where he had been placed after being caught consuming drugs he had purchased from another inmate.

Jeffrey had been serving a life sentence for the 2002 murder of 13-year-old Jennifer Naglingniq.

Ontario’s chief coroner called the inquest to examine the circumstances of Jeffrey’s death and to consider ways that similar situations, especially for inmates requiring Inuit-focused supports, can be avoided in the future.

During the first week of testimony that began on Nov. 22, the jury heard that several factors may have contributed to Jeffrey’s decision to take his own life in segregation, including being unable to contact family, access Inuit-specific resources and uncertainties surrounding where he would be placed once released from segregation.

Witnesses, including Jeffrey’s parole officer Roy Singh and counsellor Jim Salmon, testified that in April 2015, Jeffrey was moved from the medium-security section of BCI to the minimum side. This was due to consistent good behaviour over the years and Jeffrey’s standing in the institution as a leader among the Inuit population.

This switch to minimum-security designation meant that Jeffrey was eligible to attend the Waseskun Healing Centre, a minimum-security, Indigenous-focused healing lodge in Quebec. Wes Whetung, an Indigenous elder who consulted with Jeffrey during his time at BCI, testified that Jeffrey had been accepted to the centre, a “monumental achievement” for an inmate, he said.

On Friday, Indigenous liaison officer Noah Noah testified that during this period, however, Jeffrey struggled to contact his family in Nunavut. The possible stress of this, and the excitement or anxiety about relocating to Waseskun, may have contributed to Jeffrey’s diagnosed trichotillomania, a condition where a person compulsively pulls out his hair. Noah said that Jeffrey had “no eyebrows” from pulling out his own hairs.

While in minimum security at BCI, Jeffrey, who had previously struggled with substance abuse, relapsed and purchased the prescription drug Gabapentin from another inmate, which he consumed in a women’s washroom. Subsequently he was placed in segregation, thereby losing his minimum-security designation and his opportunity to attend Waseskun.

Noah added that during his time in isolation, Jeffrey was unable to access culturally specific resources such a soapstone for carving and was limited in his opportunities to speak with Indigenous elders.

While Jeffrey was in segregation, a new inmate arrived at BCI medium who was deemed “incompatible” with Jeffrey, then-prison warden David Dunk testified on Friday.

Despite BCI being deemed an Inuit Centre of Excellence, and despite the incompatible inmate not being Inuk, the decision was made by staff to transfer Jeffrey, rather than the new inmate, to a completely new institution, Dunk explained.

The issue of determining where Jeffrey could be transitioned prolonged his stay in segregation to 74 days, before Jeffrey died by suicide in his cell.

On Friday, psychiatrist Derek Pallandi testified that the feeling of “going backwards” in his healing journey may have caused Jeffrey to take his own life.

“When a person gets down to hopelessness, they’ve lost hope for the future. That seems to be a really common thread for people committing suicide,” Pallandi said. He said that in Jeffrey’s case, the hope to stay in minimum security, attend Waseskun and eventually work towards parole may have dissipated when segregation and the transfer to a new institution prompted a feeling of isolation and loss of connection to community, something Jeffrey spoke about in his suicide note.

“I see that as being a very likely factors that propel someone to being hopeless about their circumstances,” Pallandi said. “I think we can be better alert to the potential change that’s going to have an influence on someone’s mental health and impact their risk in that case.”

On Monday, the jury also heard from representatives of the Waseskun centre, where Jeffrey was hoping to go.

Elders Brian Sarwer-Foner and Dennis Nicholas gave an overview of the services Waseskun offers, and how greater awareness of its approach to healing could help mitigate situations like Jeffrey’s from reoccurring in the future.

“When someone is in the [prison] system, their humanity is not necessarily the first thing that is looked at,” Sarwer-Foner said. “If you’ve been in prison for many years, your thinking, your way of being, your behaviors — everything is has become adapted to [your] environment … in order to survive. One of the big advantages of coming to a healing lodge is to be not in that system anymore,” Sarwer-Foner said.

He testified that short of a security threat or dangerous behaviour from an inmate, he would recommend that transfers “happen sooner rather than later, because it’s already in their mind and their spirit that this is their next step,” he said.

“I would recommend that if people are medium security but look like they’re ready to work on themselves and come to the healing lodge and have done good work, don’t stop them from being able to come to the lodge, even if they’re still in medium security,” Sarwer-Foner said.

Aboriginal Legal Services and Tungasuvvingat Inuit have been given special standing at the inquest and will consider ways that access to Indigenous-specific resources may help prevent deaths like Jeffrey’s from reoccurring.

Witness testimonies will continue through Tuesday. The jury is expected to issue its verdict with recommendations on Wednesday.