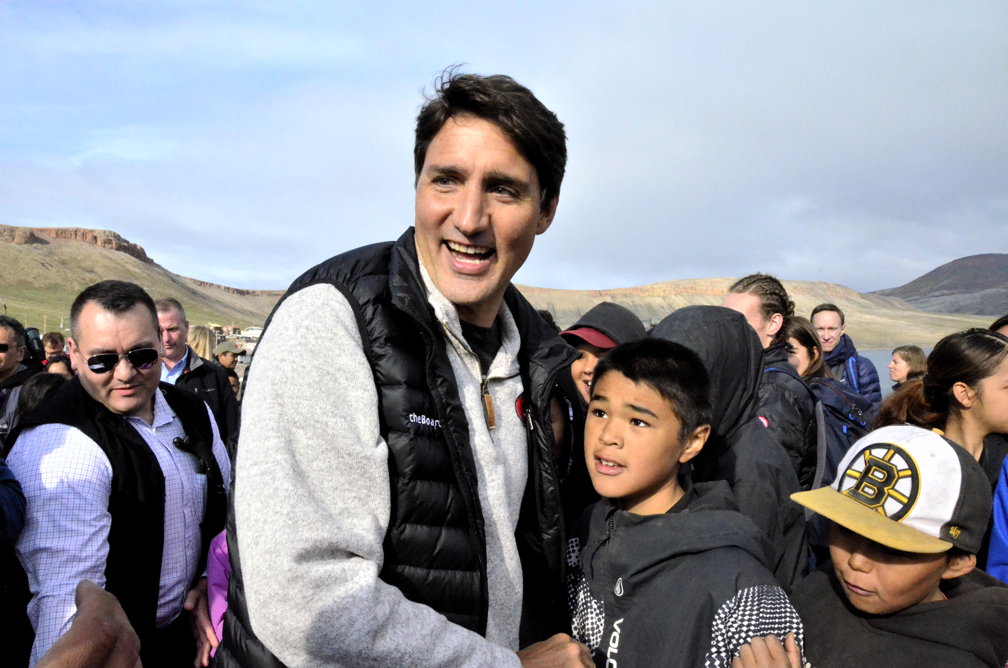 Prime Minister Justin Trudeau wades into a crowd of local residents who had come out to greet him in Arctic Bay on the afternoon of Aug. 1. That morning in Iqaluit, he had announced the completion of agreements with the Qikiqtani Inuit Association to create Tallurutiup Imanga National Marine Conservation Area around Lancaster Sound, and to start the process of creating a similar protected area called Tuvaijuittuq in the High Arctic Basin. (Photo by Jim Bell)

ARCTIC BAY—By the time Justin Trudeau landed in Arctic Bay this past Aug. 1, he had exchanged the perfect skinny business suit and tie he wore in Iqaluit that morning for a more suitable costume.

Clad instead in a pair of jeans and a puffy Patagonia-brand vest slung over a grey sweatshirt, the prime minister had transformed himself from a man of politics into a man of outdoor adventure travel, friend of the conservationist and ally of Indigenous people.

And he was ready to use the small Qikiqtani-region hamlet, population about 860, as a backdrop for the message he’d flown north to convey.

His message is this: by moving ahead on two new marine protected areas in the Arctic, his Liberal government has kept promises made to two constituencies: the southern-based parks and wilderness lobby and the Inuit of the High Arctic and North Baffin.

At the same time, the word “Nanisivik” did not issue from Trudeau’s lips. That’s the name of the former mine site and naval refueling station located over the hills from Arctic Bay on Strathcona Sound, only 32 kilometres away.

The Nanisivik refueling station, intended to serve Canada’s new ice-capable Arctic patrol ships, was supposed to be completed this year.

This past February, Carolyn Bennett, the minister of Crown-Indigenous relations, told the Senate Special Committee on the Arctic that the Arctic policy framework would likely be done by June.

But the Trudeau government has yet to release it. John Higginbotham, a former high-ranking civil servant at Global Affairs Canada and a senior fellow at Carleton University, published a blistering op-ed piece about that in the Globe and Mail on Aug. 4.

Notwithstanding all that, the agreements celebrated on Aug. 1—the completion of deals to create Tallurutiup Imanga National Marine Conservation Area, covering 109,000 square kilometres in and around Lancaster Sound, plus a new protected area called Tuvaijuittuq—give Trudeau the ability to claim that his government has exceeded a promise to protect 10 per cent of Canada’s coastline by 2020.

At the same time, they allow him to brag about the new relationship with Inuit he claims his government created through the Inuit-Crown partnership arrangement born in 2017.

“In addition to exceeding our marine conservation target, we’re also advancing on the path of reconciliation through Canada’s ongoing partnership with Qikiqtani Inuit Association and the Government of Nunavut to inform this important work,” Trudeau declared that morning at a news conference in Iqaluit.

Along the way, he took a pre-election swipe at the national Conservative leader, Andrew Scheer, quoting a speech on Arctic issues that Scheer gave in Whitehorse this past July.

“Not once did he mention the word Inuit,” Trudeau said.

He also quoted a line from Scheer about “unlocking the untapped potential” of the Arctic region.

“On that, he agrees with us. In the Arctic, there’s the potential to advance real meaningful reconciliation with Inuit, based on self-determination and modern land claims agreements,” Trudeau said.

“Potential to create better opportunities for Inuit, potential to ramp up the fight against climate change—that’s the untapped potential our government wants to unlock.”

At the same time, Jagmeet Singh, the national leader of the New Democratic Party, took a swipe of his own at Trudeau, in statement the NDP national office released the day Trudeau visited Nunavut.

Singh said a 2019 report found nearly half of families in Nunavut were hungry and food insecure in 2016, and that recent changes to the Nutrition North Canada program won’t fix that.

He also said the Polar Environment Atmospheric Research Laboratory at Eureka, known as PEARL, could close down in September when its funding runs out.

“He’ll go pose for photos and hug northerners, but when he gets back to Ottawa and behind closed doors, Trudeau is working for the big polluters and corporations that take advantage of Iqaluit families,” Singh said.

However, QIA President P.J. Akeeagok said the Aug. 1 agreements represent decades of work by Inuit to realize a collective dream.

“Inuit dreamt of a day when those waters would be protected. We imagined a day when Inuit would be true partners with the Government of Canada,” Akeeagok said.

Trudeau and Akeeagok brought the same messages to the people of Arctic Bay.

There, hundreds of residents, their numbers augmented by visiting journalists, regional leaders, RCMP bodyguards, and young Students on Ice participants who had disembarked from the Ocean Endeavour cruise ship that day, jammed themselves into every available square metre of the hamlet’s community hall.

Sharing the stage with elders like 99-year-old Qappik Attagutsiak, and other community leaders, Trudeau repeated his declaration that the day’s events marked a new relationship between Canada and Inuit.

For the Inuit of the region, the package of Tallurutiup Imanga agreements guarantees numerous concrete benefits:

A document released by QIA says the $54.8 million in Inuit stewardship program money will be distributed like this:

As for the $190 million in federal infrastructure money, QIA says it will be flow like this:

That training centre in Pond Inlet, incidentally, was negotiated through the Inuit association’s IIBA with Baffinland Iron Mines Corp. for the Mary River iron mine.

And because a small-craft harbour at Pond Inlet, funded by Ottawa and the Government of Nunavut through agreements reached in 2015, is already under construction, it’s not included in the Tallurutiup Imanga infrastructure list.

As for the training of Inuit stewards, that builds on a pilot project that QIA started about a year ago.

Under it, six Inuit from Arctic Bay worked on monitoring sea ice conditions in the Tallurutiup Imanga protected area, archiving information about cultural sites, transmitting knowledge to younger generations, and helping out with search and rescue operations.

IIBA could expand to cover Tuvaijuittuq

And the future could bring more benefits.

That’s because of a separate agreement to create a new protected area called Tuvaijuittuq, covering about 322,000 square kilometres of ocean territory in the High Arctic basin.

It’s dubbed the “last-ice area” by conservation groups like the World Wildlife Fund, since it’s deemed to be the Arctic region where, in the face of global warming, summer sea ice will last the longest.

Tuvaijuittuq includes Pikialasorsuaq, known in English as the North Water polynya, between Greenland and Ellesmere Island.

The Inuit Circumpolar Council has called for an international agreement that would protect this area, under the management of Inuit from Canada and Greenland.

Unlike Tallurutiup Imanga, protected status for Tuvaijuittuq is likely a long way off. That’s because Ottawa and QIA have just started the process and have agreed to interim protection measures only.

But should Tuvaijuittuq evolve into a permanently protected area, the IIBA signed on Aug. 1 could evolve along with it, QIA says.

Naturally, conservation groups involved in the Arctic are ecstatic about the Tallurutiup Imanga protected area.

“We are thrilled to celebrate the protection of this spectacular marine ecosystem in a way that will benefit Inuit and all Canadians for future generations,” Christopher Debicki, vice-president of policy development for Oceans North, said in a statement.

And Oceans North hastens to add that Tallurutiup Imanga became possible, after decades of work, when Shell Canada voluntarily relinquished about 30 oil and gas leases on the eastern edge of the region.

That not only expanded the protected area’s boundaries, it also guarantees that seismic testing and drilling for oil and gas will never occur in Lancaster Sound and its environs.

WWF-Canada, inventor of the phrase “last-ice area,” is equally pleased.

“As the Arctic is warming almost three times faster than our rapidly warming planet, protecting the ‘Last Ice Area’ for communities and sea ice-dependent species has long been a focus of WWF-Canada’s Arctic work, including helping to establish the Tallurutiup Imanga marine protected area,” Megan Leslie, the president and CEO of WWF-Canada, said in a statement.

“We could not be happier to see progress on offering similar protections in Tuvaijuittuq, a region which will only become increasingly vital locally, nationally and globally as the climate crisis worsens,” Leslie said. 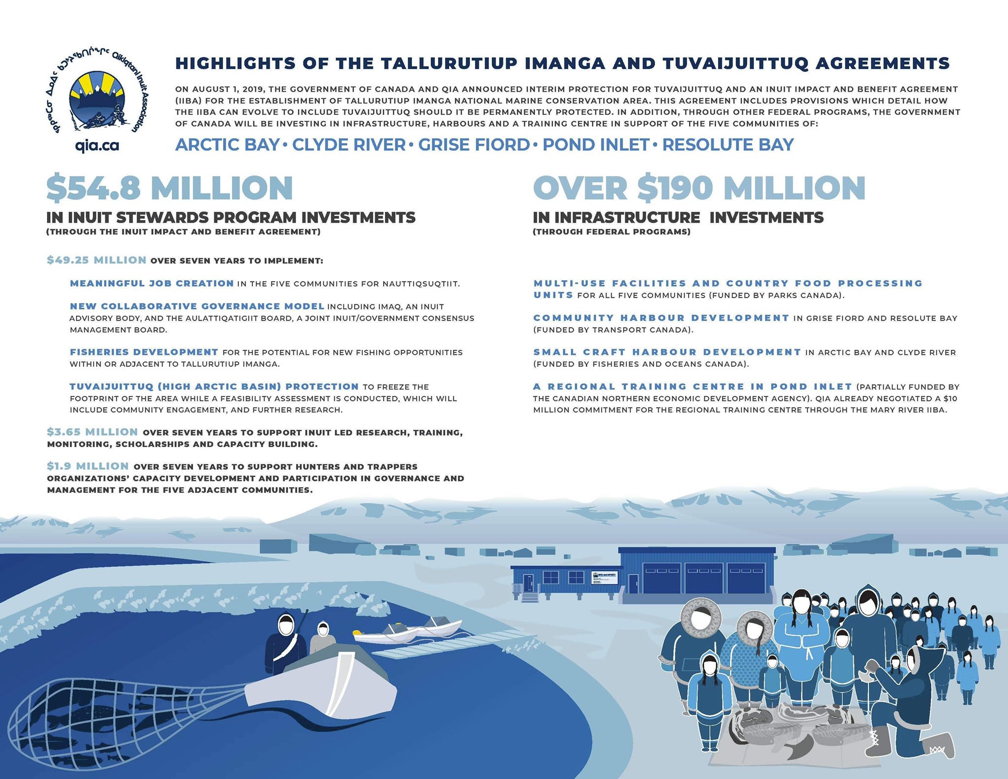 This graphic from Qikiqtani Inuit Association lists the benefits that will flow to Inuit through agreements on the Tallurutiup Imanga marine protected area. (Courtesy of QIA)