New plan should be approved by province by summer, followed by a zoning bylaw to allow for its enforcement 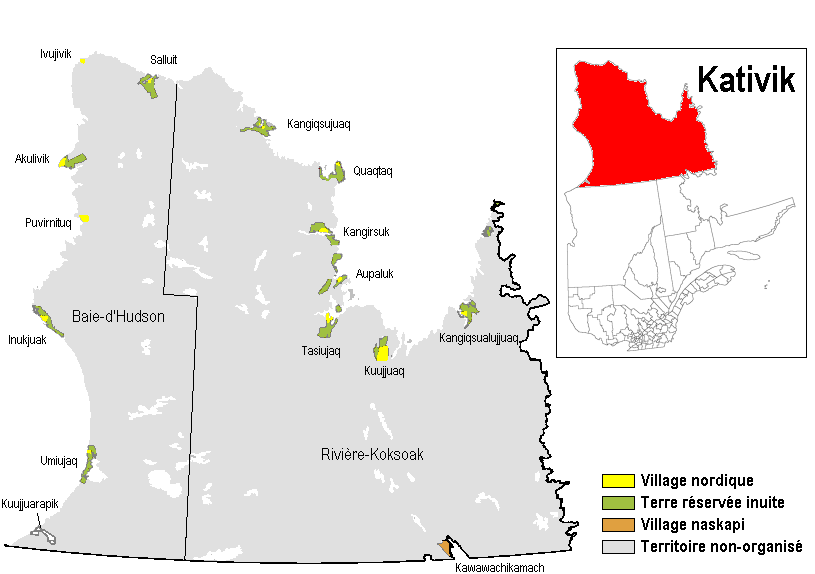 The Kativik Regional Government awaits approval of its revised Master Plan for Land Use in the Kativik Region from the provincial government by summer 2020. The next step is developing a zoning bylaw to enforce that plan. (Map from Wikimedia Commons)

Nunavik’s leaders hope to give the forthcoming update to the region’s land-use plan some teeth to help regulate industrial development.

A revised Master Plan for Land Use in the Kativik Region is now in the hands of the Quebec’s ministry of municipal affairs for approval. The existing plan hasn’t been updated for more than two decades.

“It’s been 22 years since the last one and the KRG for sure does not want to wait another 22 years,” said Veronique Gilbert, assistant director of environment, lands and renewable resources with the Kativik Regional Government.

“The territory is changing fast, so we want it updated.”

The master plan designates what kinds of development are allowed throughout the region. It restricts development for public safety reasons, for instance, in areas prone to landslides, erosion and flooding. In other cases, areas are off limits to development due to their historical, cultural, esthetic or ecological importance.

The revised plan doesn’t change how different areas of land can be used. But it includes the recently created network of parks and protected areas that have been developed since the previous plan was written, as well as changes under Plan Nord.

As well, since the original plan was developed, Ivujivik has signed the James Bay and Northern Quebec Agreement, so its own category of land is now included, as well as the other Northern Villages that now have their own master plans.

Gilbert said she’s hopeful they’ll have approval of the plan by the summertime, considering much of the actual land-use planning is consistent with the old plan.

Next, Gilbert’s department continues to work on a zoning bylaw that will give the new plan its teeth. That’s something the previous master plan didn’t have.

“We have a plan but we have no tools to empower it to have power over the territory,” Gilbert said.

In the case of a mining exploration camp, the proponent could submit the necessary information for its project, but without a bylaw to implement the master plan, the KRG couldn’t say no to the project, Gilbert explained.

“They can be critical, give a lot of directives and recommendation to the promoter, but at the end of day they had no power to enforce,” she said.

There are a few reasons why that zoning bylaw wasn’t written back in the late 1990s, but a major factor is the complicated way that the region was carved up by the Kativik Act, which was signed in 1978.

“The Kativik Region is the region everywhere in Nunavik other than the NVs,” said Gilbert. “It’s the municipality outside of the NVs.”

And herein lies the complication: “To adopt a zoning bylaw, we have to hold a referendum in the territory, but no one is living there—there is no election list,” she said.

The people all live within their respective northern village, not in the expanse of land in between.

The Kativik Act itself is based on the James Bay and Northern Quebec Agreement and it certainly has its kinks, said Gilbert.

“We are working with an old tool, the Kativik Act, that is not perfect,” she said.

“When it was drafted and approved by Quebec, nobody raised a flag that there was no resident in the Kativik Region and that might cause problems when we want to approve a zoning bylaw.”

But they’ve since found a solution, said Gilbert.

Since the KRG acts as the municipal government for the Kativik Region, once the zoning bylaw is at the approval stage, members of the KRG council will vote in the referendum.

“They are representing the region,” Gilbert said. “The KRG is acting as a municipality and they are the councillors acting for the municipality.”

Gilbert’s hope is to have the bylaw ready for a vote in a year and a half.

They’re working in close contact with Quebec’s ministries of municipal affairs and natural resources in drafting the bylaw, in the hope there won’t be any concerns late in the game.

There are still many details to work out, including how to factor in costs so the regional government can inspect developments once it has enforcement powers.

This is also being discussed with other parties, such as the Cree, Naskapi and Makivik Corp., which is in the process of working towards self-determination for Nunavik Inuit.

“It’s the KRG leading the file and we’ve invited them to the committee to make sure we have the comments and knowledge of all of them,” Gilbert said.

She said that the zoning bylaw won’t contravene the James Bay and Northern Quebec Agreement, and the rights for hunting, fishing and trapping activities on the territory for Inuit, Cree and Naskapi.

“They will continue to do this,” she said.

“It’s really more for the industry coming onto the territory and economic development, to better structure them and know what’s happening there,” Gilbert said.

In the future, she said, it’s hoped that master plan revisions will be done much more quickly.

“I’m aiming for maybe every six or seven years to do revisions of the master plan to make sure we’re not stuck with a document that’s not updated,” she said.

But the big difference will be having a bylaw in place to enforce that plan.

“At the end, the KRG council or executives will be able to say ‘yes’ or ‘no’ to a project if it follows or doesn’t follow the authorization in the zoning bylaw,” Gilbert said.

“That’s the whole goal of this project is for the KRG to have a say, have power and be able to say ‘yes’ or ‘no.’ Right now, it’s always ‘yes’ because we have no bylaws to apply.”