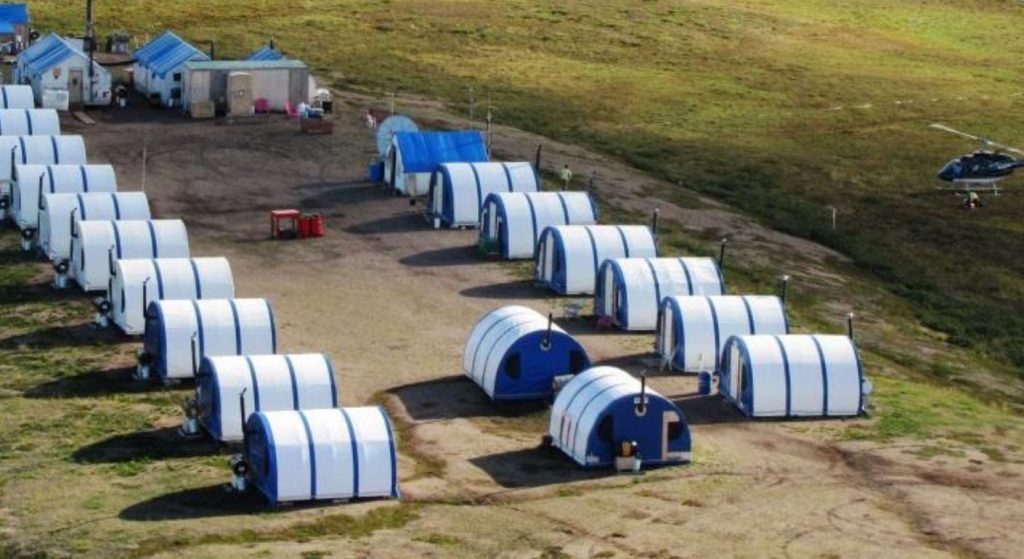 The Angilak project, seen through its campsite here, found radioactivity in the seven holes it recently drilled, according to a recent company news release. (Photo courtesy of ValOre)

ValOre Metals Corp. began its uranium-drilling season in Nunavut by announcing the results of seven holes drilled at its Angilak property, according to a company news release.

With the four zones that have  been drilled all resulting in radioactivity, it means ValOre knows it is in the right spot, he added.

Paterson said that by finding the right place to drill, ValOre can make more holes and get to the valuable material: uranium.

Angilak, which means “biggest” in Inuktitut, is a radioactive zone that has been owned by ValOre since 2008, when the company was called Kivalliq Energy Corporation.

Nunavut Tunngavik Inc. signed a deal with ValOre in 2008 because some of the company’s property is on Inuit-owned land. As part of that deal, if ValOre gets to the production stage, NTI can decide whether it wants participating interest in the project or to collect royalties.

Paterson said that ValOre has previously consulted with the communities near the project, which include Baker Lake, Rankin Inlet and Arviat.

If there is a need to increase the size of the Angilak project, ValOre will let communities know they will be hiring, Paterson said.

He added that he understands there are 12 people from Nunavut hired onto the project currently, and 30 from the south.

ValOre’s current drilling work is the first time the company has done it since 2016 because the uranium market has been too poor, Paterson said. But he added that with more nuclear reactors being built around the world the interest from investors in uranium has returned.

In terms of community concerns surrounding radioactive waste and spills, Paterson emphasized that ValOre is an exploration company and not actively mining uranium.

He added that once the project does develop, there is clear communication in what waste might be generated and how it will be dealt with.