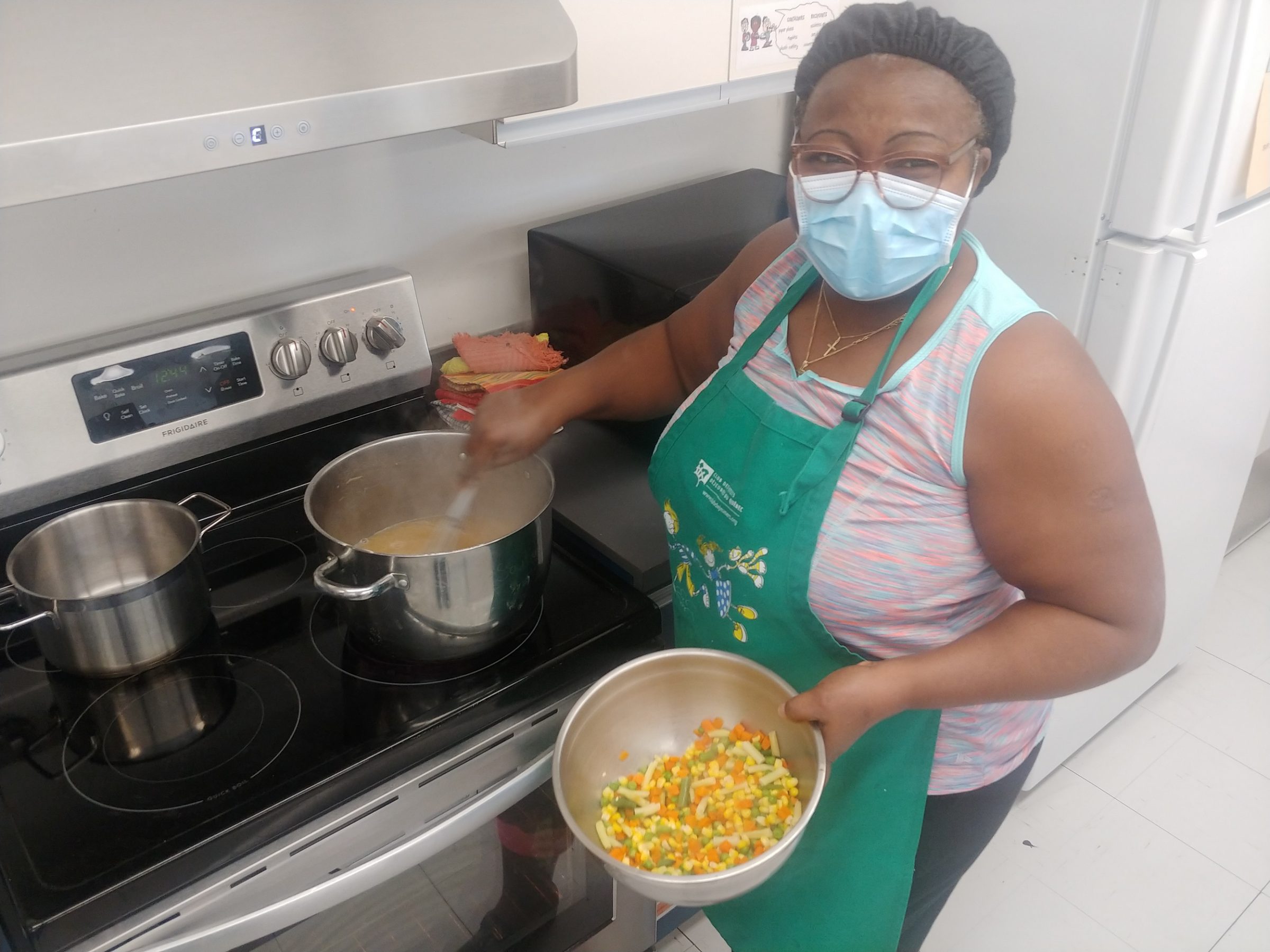 “She loves cooking for others,” says Lizzie Thomassie, a long-time colleague of Marie-Louise Nkwaya. (Photo courtesy of Hyungu Kang) 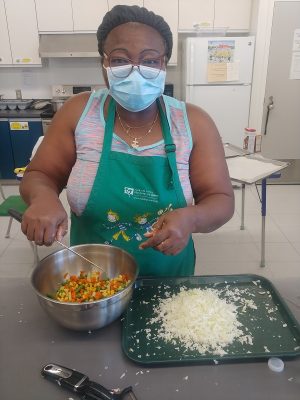 Marie-Louise Nkwaya is busy cooking in the kitchen at Sautjuit school, where she runs nutrition courses and prepares community meals. (Photo courtesy of Hyungu Kang)

Lizzie Thomassie has seen a lot of southern teachers come and go over the years.

But few have carved out a place for themselves in her home community of Kangirsuk quite like her colleague Marie-Louise Nkwaya.

Thomassie has worked alongside Nkwaya as a teacher at Sautjuit school in the Ungava coast community for eight years.

Over that time, Nkwaya has danced and cooked her way into many people’s hearts, Thomassie said, becoming an important support and ally to Inuit in the Nunavik community. So much so, that her colleagues wanted to share her story with Nunatsiaq News.

Dancing is her way of greeting people, Thomassie said, while cooking is the way she lets her students and fellow community members know that she cares.

“She loves cooking for others,” Thomassie said. “She sincerely cares. She loves her students—she really cares about making sure they complete their work and graduate.

Nkwaya agrees on that latter point. The veteran teacher grew up in Cameroon, in a tight-knit village that reminds her so much of Kangirsuk, population 600.

“In Cameroon, we live as families—there are households of 20 people,” Nkwaya said.

“When I go visit my sisters or cousins, I don’t have to tell them first—I just go. There are a lot of similarities.”

Nkwaya immigrated to Canada as an adult and was teaching in Ottawa, when she decided in 2012 to move to Nunavik. Her husband and children, and now grandchildren, live in Montreal.

“I love to cook—it’s my passion,” she said. “So when I arrived here, kids started to come visit me at home, and they often asked for something eat. I always have lots of food in my fridge.” 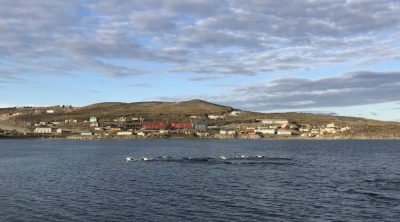 A view of Kangirsuk and Sautjuit school, the red and blue building, from Ungava Bay. (Photo by Jessie Takulik)

But Nkwaya—also known as Mamalou—took it a step farther, launching a nutrition course for school students outside the regular curriculum. She also started preparing a monthly meal for community members.

Another colleague, Hyungu Kang, said one of his first impressions of Nkwaya was her energy, particularly when he saw her preparing meals for 200–300 people.

But her tasty cooking has left the strongest impression. Nkwaya makes traditional Cameroonian dishes that combine rice, meat and sauces, but she incorporates local ingredients and recipes, like Arctic char and bannock.

“From the moment I met her, she just wanted to be the caretaker,” he said. “She doesn’t do it for individuals, she does it for the whole community.”

Another teaching colleague in Kangirsuk, Yanick Nono, happened to know Nkwaya’s family from the region in Cameroon where they both grew up. Nono said Nkwaya simply transplanted her sense of community from her place of birth to her newer home of Kangirsuk.

While in Cameroon, Nkwaya cared for her younger siblings; here in Kangirsuk, she fosters local children.

“She’s always asking ‘What can I do for you?’” Nono said. “She really tries to be there for everyone.”

But Nkwaya believes that she has in fact been the recipient of love and support from her fellow Nunavimmiut neighbours.

When, in 2017, Nkwaya became gravely ill and lay in a coma in a Montreal hospital, she said the village prayed for her and played a key role in her recovery and return to work.