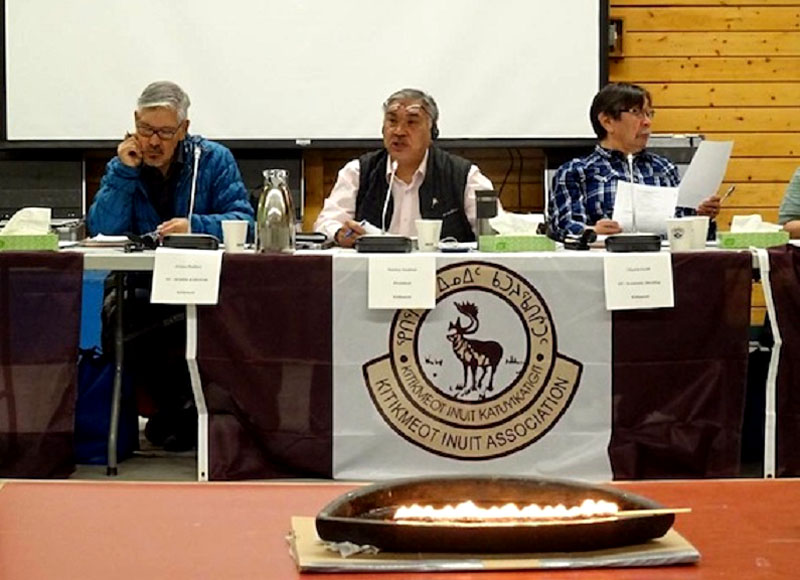 The Kitikmeot Inuit Association president, Stanley Anablak speaks at the annual general meeting of the organization in 2017. Anablak was re-elected as KIA president earlier this week. (FILE PHOTO)

The veteran Nunavut Tunngavik Inc. vice-president, James Eetoolook, has been re-elected to yet another term as second-in-command at Nunavut’s Inuit birthright organization.

The election, held on Dec. 10, was delayed when polls in Gjoa Haven and Arctic Bay closed due to bad weather.

The only other candidate, Peter Ohokanoak, finished with 31.7 per cent or 1,117 votes.

The results remain unofficial, however, as NTI waits for a final vote count from its poll in Cambridge Bay.

Eetoolook, who’s from Taloyoak, started as a director with the Tungavik Federation of Nunavut and has served as vice-president since the 1990s.

But final results from that election were delayed as well, due to a tight race in Iqaluit, where candidates Steven Polee Lucassie and Jesse Mike finished with just a few votes separating them.

A recount confirmed on Dec. 12 that Lucassie won that election with 170 votes—just nine more than Mike received.

The following candidates were also elected as QIA community directors:

Jeannie Evalik was elected that day as KIA’s vice-president of social and cultural development. Evalik drew 352 votes, ahead of two other candidates, Darlene Metuituk and Joe Tulurialuk.

Inuit voters in the Kitikmeot region also elected four community board members to KIA’s board of directors: