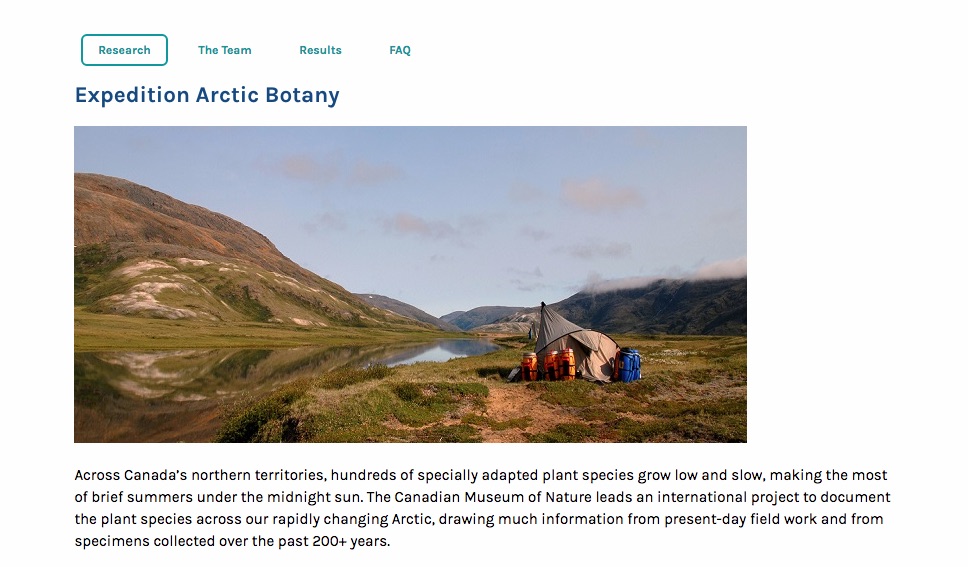 Expedition Arctic Botany, a project launched by the Canadian Museum of Nature, uses an online platform so that volunteers can help catalogue the museum’s massive botanical collection in an online database. (Screen shot)

Do you have some time on your hands, a computer and internet connection, and a desire to help improve the world’s understanding of Arctic plants? If so, Jennifer Doubt wants to enlist you as a citizen scientist.

Doubt, the Canadian Museum of Nature’s curator of botany, is seeking help to tackle a monumental task. The museum’s botanical collection, known as the National Herbarium, contains more than one million plant specimens, including the world’s best collection of samples from the Canadian Arctic.

But there’s a snag. Much of the collection, consisting of many metal cabinets full of old paper and flattened plants, isn’t yet catalogued in a computer database. That means you can’t, for instance, search for the name of a particular botanist and find everything he or she collected.

Doubt’s project, Expedition Arctic Botany, seeks to bring this information to researchers’ fingertips. Using a website called Zooniverse, volunteers are asked to review images of individual records from the collection and record the species name, where it was collected and who collected it. To ensure quality control, the information needs to be transcribed by five different users.

Since January, about 1,500 citizen scientists have already helped record data for tens of thousands of Arctic plant specimens.

Prior to that, Doubt and her staff and volunteers spent two years digitally scanning specimens of about 100,000 Arctic plants and 15,000 lichens, with support from the Sitka Foundation.

In an online video in which she describes the project, Doubt waxes poetic about how “the magical combination of plants and dates and places makes it possible not only to study countless aspects of plant life across the Canadian Arctic, but also to track changes in plant life through time, all while following the fascinating footsteps of some heroic or tragic or dastardly or divergent characters who walked the North with their trusty plant presses.”

According to a news release issued by the museum, “those characters include Alf Erling Porsild, the museum’s ‘reindeer’ botanist, who greatly expanded the museum’s Arctic plant collection during the 1940s; Margaret Oldenburg, an independent self-taught botanist who funded her travels in the Arctic in the 1940s and 1950s; and Sir John Rae, medical doctor and naturalist who famously searched for the lost team of Sir John Franklin in the late 1840s and early 1850s.”

There are thousands of specimens that still need to be added to the online database, which the museum says will be plenty to keep people busy over the next year. To help, visit the online Zooniverse platform.