Was Evelyn Sampson an Inuk? 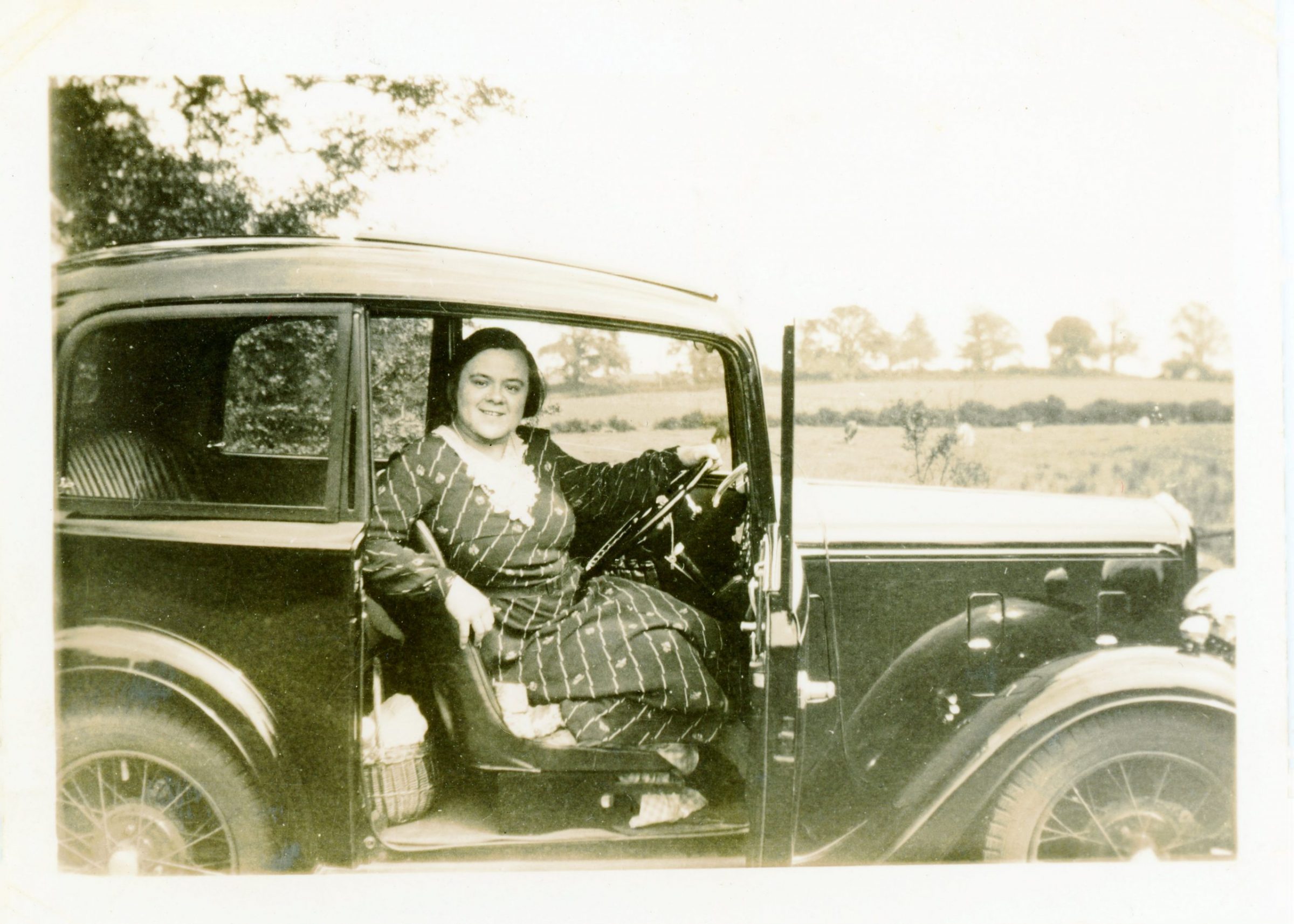 Charles Sampson, a lay minister who had been a draper in Wimbledon near London, first arrived at Blacklead Island (Uummannarjuaq) in 1896, expecting to join missionary Joseph Parker while the veteran clergyman Edmund Peck returned to England on furlough.

But Parker had drowned a month before Sampson’s arrival. Peck spent a month with the newcomer, introduced him to the work and the language, and left for England anyway. 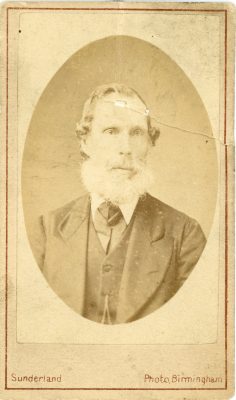 Charles Sampson, a former missionary at Blacklead Island, started his own trading post at French Head near Cape Haven in 1901. (Photo courtesy of the Kenn Harper Collection)

The Blacklead mission relied heavily on the Scottish whaling station on the same island, especially for the transport of its personnel to the Arctic. So it came as a surprise when the whaling station owner, Crawford Noble, made a complaint to the mission board the following year, accusing Sampson of trading furs for his own account with ships’ crews. Sampson vigorously denied the charges, and claimed that he had a good relationship with Noble’s local agent. In the end, Reverend Peck supported Sampson.

In 1898 Sampson made a visit to Cape Haven, near the end of the peninsula jutting out into Davis Strait, near the mouth of Frobisher Bay. There was an American trading post there, run by a Dane, Jay Jensen. He was on good terms with the missionaries and gave Sampson a warm welcome. When Sampson returned to Blacklead, the seeds of an idea had been planted in his fertile mind.

In 1900 Sampson finally returned to England, after four consecutive winterings at Blacklead, the most of any missionary.

From London he wrote a letter to his employer, the Church Missionary Society. In it he complained about his treatment over the previous winter at the hands of Noble’s new trader, Thomas Esselmont. The trader had openly mocked the missionary and encouraged the Inuit to disrespect him. Sampson concluded, “Therefore I cannot go out again under obligations which bind one’s tongue & hinder the work, as assuredly it does.”

But Sampson had gotten on well with other traders. Nevertheless he blamed Noble for imposing certain conditions on the missionaries, and the Church Missionary Society for accepting those conditions. He knew that other missionaries could, and would, accept those strictures, but for himself he could not. He announced his resignation, explaining:

“During the past year I have had a legacy left me … I have decided to go to another part of Baffin Land to trade amongst the Eskimos during the Spring & Summer & teach in the Winter months.”

The other part of Baffin Land to which he would go would be the area of Cape Haven, specifically to French Head, about 25 miles from Jay Jensen’s station. Jensen had asked for a missionary to teach the Inuit, but he was probably not expecting a trader-cum-missionary who would compete with him.

Sampson bought a fishing ketch, Forget-Me-Not, and set out for Baffin Island in 1901. Reaching Cape Haven on Aug. 24, he supplied Jensen with some tobacco, ammunition and clothing before continuing on establish his own post.

In July of 1902, his old colleague Edmund Peck visited the area and was surprised to discover Sampson there as a trader – he had known nothing of his return to Baffin Island. He wrote favourably of Sampson’s work, though he noted that Sampson was about to go back to England shortly. 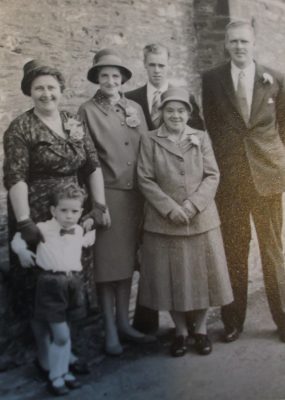 Evelyn Sampson, seen in the front row of this photograph, stands with a family group in England.
(Photo courtesy of the Kenn Harper Collection)

Then, mysteriously, Sampson’s trading venture ended. That fall, Sampson sailed the Forget-Me-Not to St. John`s, Newfoundland, where he sold the ship, then returned to England. He married a year later, settled in a Staffordshire market town where he ran a small hotel, and eventually acquired a shoe shop which he managed until just before his death in 1922.

The reasons for Charles Sampson’s hasty and permanent departure from the Arctic are obscure. In a letter to the missionary, his former friend, Jensen, raised charges of immorality against him. But, Jensen wrote, he wanted to convey the details in person in London. That had to wait until 1903. But rather than ending up at missionary headquarters, Jensen landed in a London hospital where he died on Dec. 30, taking his information to the grave.

Were the charges of immorality true? Again, we will never know. But let’s look at some peculiarities of Sampson’s life back in England.

He married 30-year-old Florence Johnson, in 1903. They had a daughter, Florence Evelyn Mary Sampson, their only child. Evelyn was baptized on June 18, 1905. This should indicate that she was born that year. But I don’t believe it. Here’s why.

When a researcher in Scotland looked into the Sampson story in the early 1970s, he wrote to the city librarian of Lichfield County. Coincidentally, the librarian reported, he had taken piano lessons from Miss Sampson when he was a boy. Evelyn was unmarried and lived with her mother. The librarian wrote, unprompted, that Evelyn “looked like an Eskimo.”

Four decades passed. In 2012 I tracked down Sampson’s relatives in England, and paid them a visit. They were co-operative. We talked about Charles Sampson. Then I asked about Evelyn. She was an uncomplicated woman, they said, simple in her wants. She was an excellent pianist, and made her living as a music teacher. But she didn’t look like anyone in the family. She looked, they said, “like an Eskimo,” and they often had wondered if she was.

Strange as this may seem, I think it is possible. A birth registration was easily faked in a small community over 100 years ago, and I have had this confirmed in conversation with genealogists. You need not produce the baby, but merely show up at the registry office and offer a name, parentage and a date. I think it possible that Evelyn Sampson was the child of Charles Sampson and an Inuit woman in Baffin Island, a child that Sampson brought back to England in 1902 to be raised in a marriage of convenience to a British woman.

That would explain the remarkable suggestion, made by parties who knew her, twice in the last 50 years, that Evelyn Sampson “looked like an Eskimo.” It would also explain Jay Jensen’s charges of immorality against Sampson. If this is true, although we don’t know the nature of the relationship between Sampson and the child’s mother, it was not a relationship sanctioned by wedlock, and this may have offended Jensen’s moral sensibilities.

Evelyn Sampson never married, so there is no DNA of descendants to check. She died in 1961. Had she been taken from Baffin Island, perhaps without her mother’s consent, as a baby, and raised in England as the daughter of a former missionary? Is there any memory of this in Inuit tradition? Or will this remain an unsolved Arctic mystery?