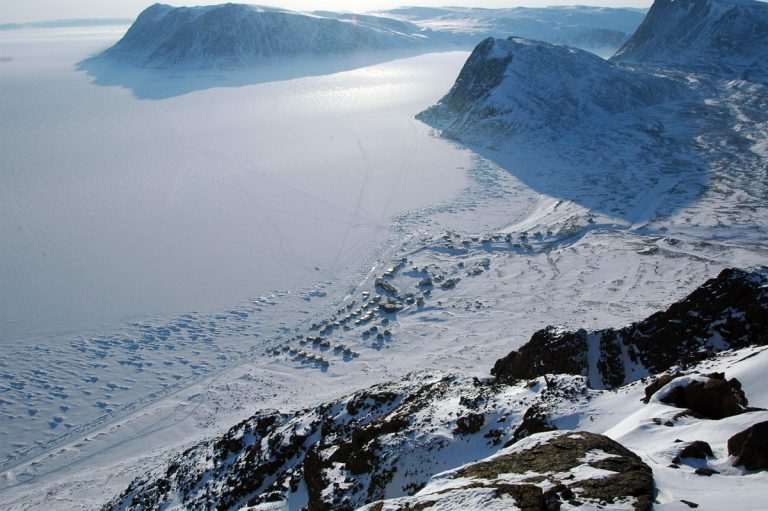 The hamlet of Grise Fiord, seen here, has had to ration water since last fall as a result of one of its two water tanks leaking. (File photo)

Crews have landed in Grise Fiord to fix the hamlet’s leaking water tank, which will end several months of water conservation there by later this summer.

“It’s a weight off of everybody,” said Daryl Dibblee, the hamlet’s senior administrative officer.

Only one of the two water tanks that serves Grise Fiord has been in use since late October, when the leak was found.

As a result, the hamlet has delivered two and a half truckloads of water to the community every week instead of three, with staff going on the radio weekly to communicate the need for residents to conserve water.

Grise Fiord, with a population of about 150, has a unique water system that uses tanks filled from melting glaciers once a year in the summer. Each tank is just over three storeys high, 22 metres in diameter and holds 3.7 million litres of water.

The working water tank should be refilled by mid-June, when the glacier water starts running again, Dibblee said.

As a back-up, the Government of Nunavut will be supplying the hamlet with water bladders that collectively hold one million litres of water, Dibblee said.

The tank that is not working is scheduled to be ready to be filled by the end of August. Having this tank filled will end water rationing in the hamlet.

Neegan Burnside, the company contracted to work with the GN’s Department of Community and Government Services on the broken water tank, arrived within the past week.

Dibblee said the contractors told him they might be able to have the broken water tank repaired before the end of August projection.

As an added bonus, a third, smaller water tank that has not been used by the hamlet in 20 years is being refurbished and repiped, and could be functional by the end of June or earlier.

Having contractors in the hamlet to finally fix the water tank situation is welcome, Dibblee said, adding the process to have its water system fixed has been like a roller coaster ride.

“To finally see a complete plan and to see the contractor in [Grise Fiord] working right now, it just makes it so much better.”