Whale hunt a mix of sadness, joy for lead harpooner

Pregnant female dies after 300 rifle rounds, one lance strike through the heart 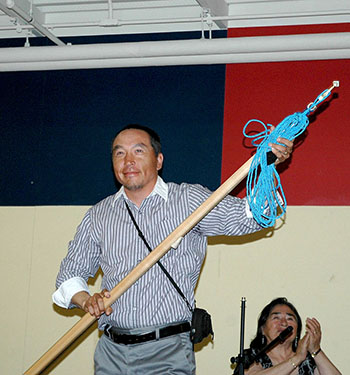 Lukasi Piluruut of Kangiqsujuaq receives a seal harpoon from this year’s hunt crew in recognition of the role he played as head harpooner in Nunavik’s second successful bowhead whale hunt. (PHOTO BY SARAH ROGERS) 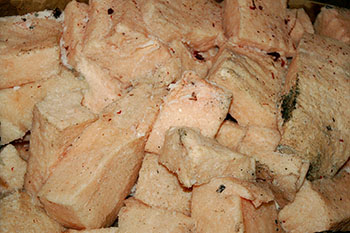 Bowhead whale muktuk, cut and packaged for distribution among the 12 Nunavik communities that participated in the hunt. (PHOTO BY SARAH ROGERS) 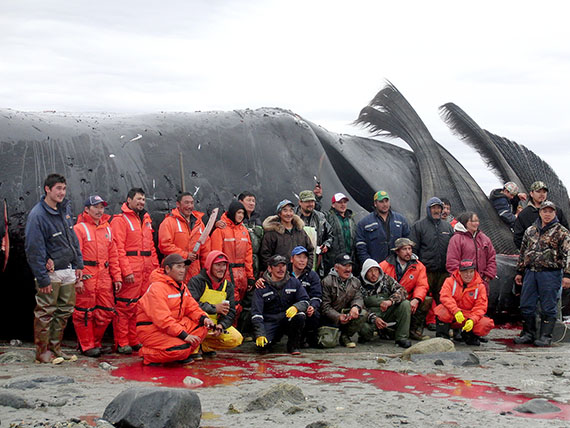 The Nunavik whaling crew poses for a picture Aug. 23 at at Qitik camp, where they butchered the animal. (PHOTO BY LALLY SAKIAGAK GREG)

KANGIQSUJUAQ — Lukasi Pilurtuut says he never experienced so much happiness, sadness and excitement all at once, as he did during the recent bowhead whale hunt near Kangiqsujuaq.

“It was so exciting,” Pilurtuut said. “I was thinking about all the people it was going to help.”

Pilurtuut, along with a crew of hunters from around Nunavik, finally killed the bowhead Aug. 23, after a series of unexpected setbacks.

First, an explosive device meant to go off as the harpoon first entered the bowhead did not detonate.

This occurred about noon on Aug. 22.

Then, despite being riddled with as many as 300 rifle shots, fired after the unsuccessful harpoon, the bowhead whale was not killed, but died the following morning after being lanced through the heart.

“If we had used the grenade, (the whale) would have died quicker,” Pilurtuut said. “For the next hunt, I would use the same harpoon as we did the first year.”

The harpoon deployed in this year’s hunt was different from that used in 2008, and had been specially crafted for the hunt by Makivik Corp..

The shot of penthrite released by the harpoon generally ensures a quick death for the whale.

Once this bowhead whale was finally dead, hunters soon discovered it was a pregnant female.

A 60- to 70-pound calf was removed from the bowhead whale during the butchering process, Pirlutuut said. It was already dead.

“That day was full of mixed emotion, for sure,” Pilurtuut said. “We didn’t know if it was a female or male while it was in the water.”

Before deciding to follow and then try to kill this bowhead whale, hunters had previously followed another bowhead whale — that is, until they realized the whale was a female and travelling with a young calf.

Federal department of fisheries regulations say hunters shouldn’t kill a juvenile bowhead whale or an adult that is accompanied by its offspring.

Hunters say there was no way to tell if this bowhead whale was pregnant.

Once the 56-foot long (17 metres) bowhead whale was towed on to shore at Qitik, a campsite 20 kilometres southeast of Kangiqsujuaq, about 50 people helped butcher the whale — a five-hour long feat that Pilurtuut described as “very well organized.”

The bowhead whale weighed about 56 tonnes, based on an estimate of one tonne per foot, eight tonnes more than last year’s whale.

To avoid the meat from spoiling, as some portions did last year, the butchering was done as close to the hunting site as possible.

That was the biggest difference between this and last year’s bowhead whale hunt, noted Vincent Cormier, a DFO fisheries officer, who accompanied the hunt for the second year in a row.

“The butchering was very well done,” Cormier said. “No meat was spoiled and the distribution of both the meat and the muktuk was done very efficiently as well.”

The first thing removed from the whale was its guts, because they retain too much heat inside the animal, Cormier said.

Depending on the part of the whale being butchered, pieces were then cut into different sized cubes and packaged in plastic containers or barrels to be shipped out by boat or plane.

One of the whale’s eyes was removed so it could be sent to the DFO laboratory in Winnipeg.

Examination of the eye will help reveal the bowhead whale’s age, Cormier said.

The only indication of the age of the whale so far is a bullet found in the animal, which is estimated to be at least 100 years old, he said.

Studies have shown bowhead whales can live as long as 200 years.

“It was pretty much like hunting a dinosaur,” said the Simon Richard, another DFO fisheries officer, who was in Kangiqsujuaq for the hunt. “It was amazing.”

Both DFO officers said they considered themselves privileged to have been part of the hunt.

“At the campsite, we felt like we were a part of the family,” Cormier said. “Every morning there was a prayer and we were invited to share a meal together.”

As the hunters from the different villages left after the all the work was done, flares were set off to celebrate their participation in the hunt and send them home safely.

Twelve of the 14 communities in Nunavik — all except Salluit and Kuujjuaraapi — joined in the hunt. These communities will receive a portion of the bowhead whale meat and muktuk in return.

“If we were to hunt again next year, I would love it to be in another community,” Pilurtuut said. “Just to give them the experience.”